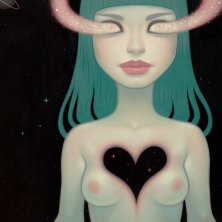 ARTIST
Tara McPherson
Only 1 left at this price!
SHARE AND EARN $


"This painting was part of my 'Wandering Luminations' exhibition at Jonathan LeVine Gallery in October 2013. The theme of the show as a whole was about evolution in darkness, and the light that is created from within that dim environment...deep space, deep oceans, dark caves. The parallels these unknown worlds have. Bio-luminescent figures that, in their solitude, create a glowing environment. Light from dark. Creation in isolation.

The idea behind 'The Love Note' was an exploration into the heart hole theme I have been playing with for many years, replacing the empty heart with blank heart shaped note that has been unfolded and pinned to this woman's chest. It signifies the beginning, an almost clean slate if you will, tinged with just a little blood from her past, with a blind leap of faith into the future." - Tara McPherson

CONTINUE READING
Tara McPherson is an artist based out of New York City. Creating art about people and their odd ways, her characters seem to exude an idealized innocence with a glimpse of hard earned wisdom in their eyes. She explores myths and legends, astronomy, nature, love, childhood and good old life experience. People and their relationships are a central theme throughout her work.

Tara McPherson
Why I Do What I Do Puzzle
ARCHIVED

ARCHIVED ITEM
This product is archived in our warehouse. It is not currently on sale, but could come back at any time.
EDITION OF 20
20 x 24 Inches
Archival Pigment Print on 310gsm Museum Natural Fine Art Paper