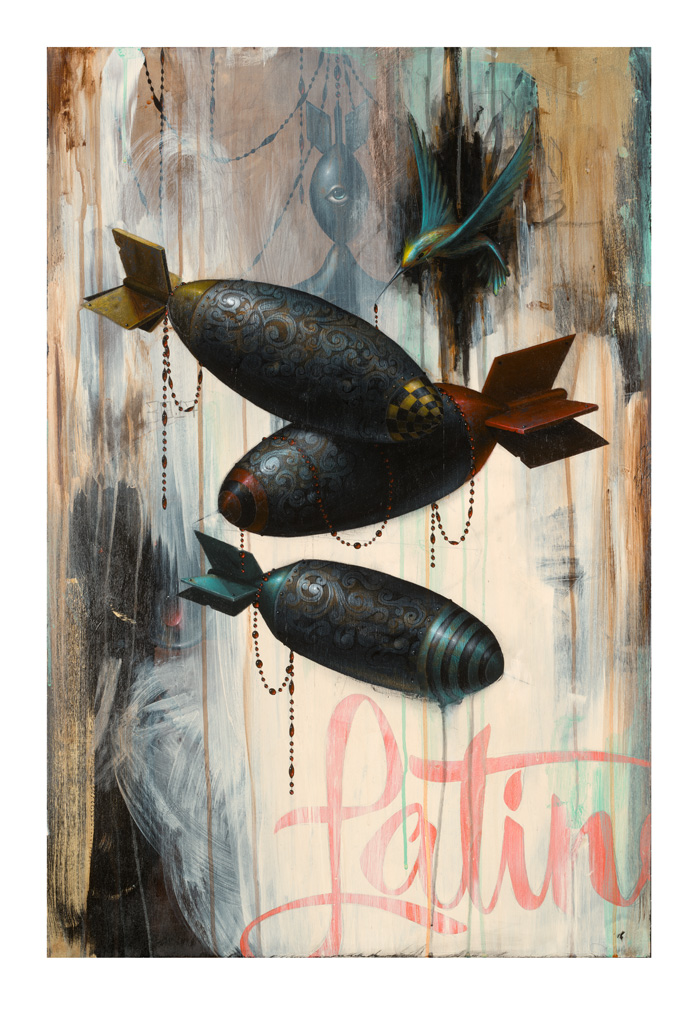 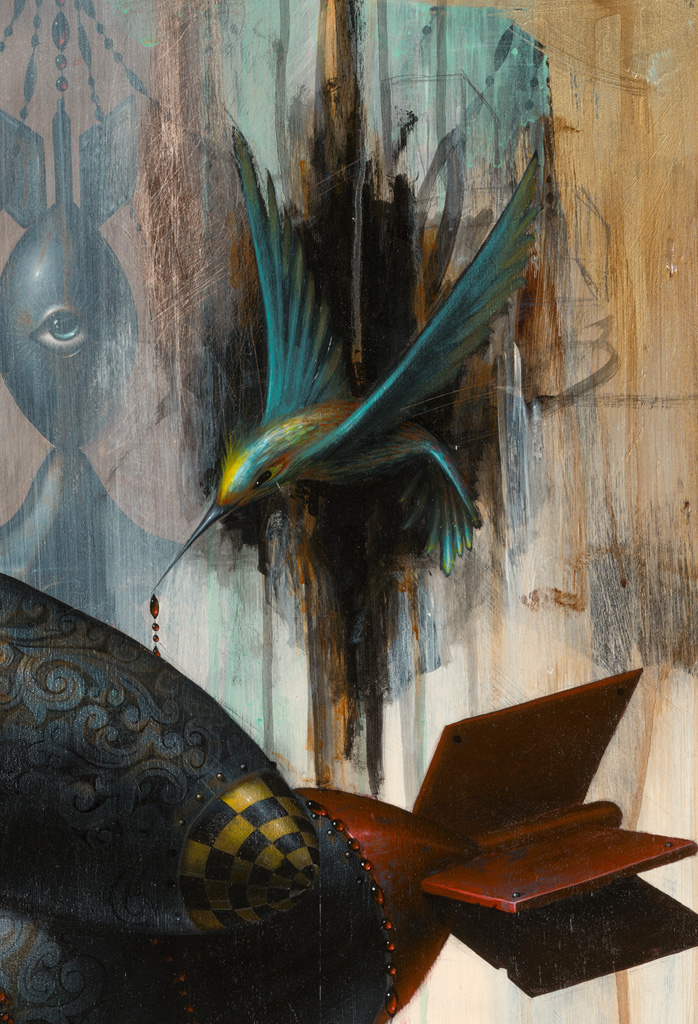 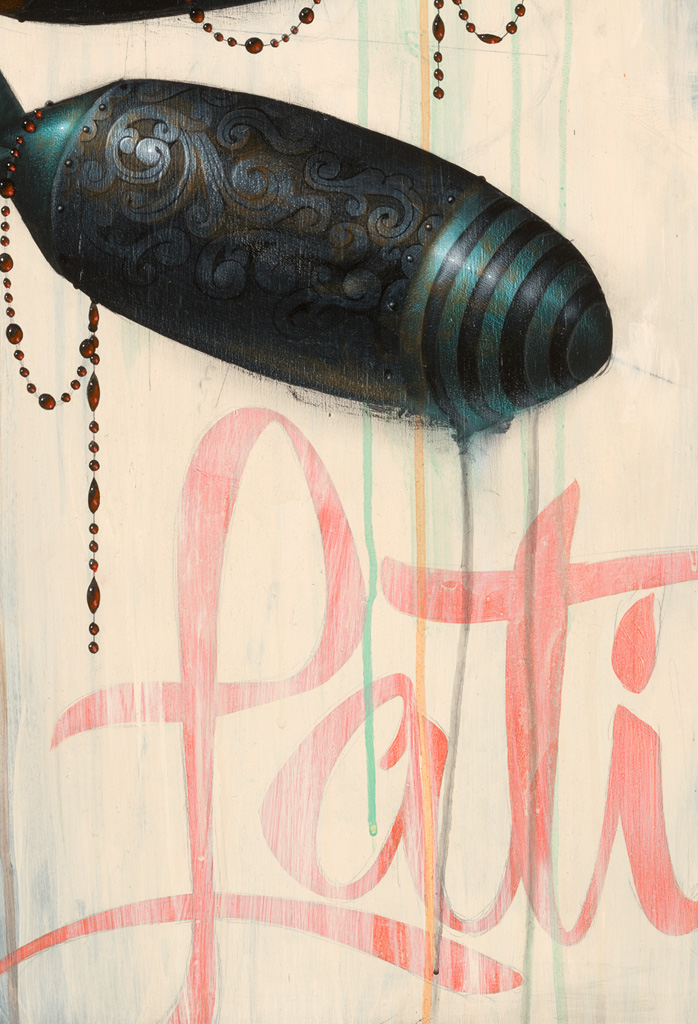 ABOUT THIS ART:
First, appreciate the cryptic charm behind the artist's chosen name. KMNDZ comes from the computer keyboard directive 'command' + 'z' = 'undo' - a beguiling (almost poetic) fiat that could easily be applied to other situations or to any number of hopeful wishes in one's life. This graphic design genius impressively utilizes every aesthetic possibility that technology and new media offer up - and does so with an incredible passion for detail. Tres Colores ("Three Colors") draws your attention to both the obvious (three distinct shades, three principal subjects) and to the symbolic subtext within a descending cascade of bombs. This is familiar imagery and (of course) a familiar reflection on our destructive-prone nature, but there is a subtle whisper of defiant hope on the canvas that the eye will detect with grateful relief.
MORE
ABOUT Kmndz:
The idea behind ‘Kmndz’ is built upon the premise of reflection, hope, and a burning desire to live life to the fullest.” A successful leader in the graphic design community, this Los Angeles based artist, has worked for some of the world’s premier design agencies and top entertainment companies. With brands like MTV Networks, Universal Pictures, Microsoft, Lexus, Disney, and Activision populating his resume, Rodriguez has built an impressive portfolio of both artistic and technological accomplishments in the world of graphic design and new-media. However, primarily, Rodriguez is an artist.

He attributes his success in commercial design as a direct result of his passion for art. “I didn’t choose a career in visual design. It chose me. Draw, paint, design, take pictures… it’s what I do and always have done.” Kmndz is about both the past and the future. “Anyone who’s ever touched a Mac, knows that the keystroke combination ‘command’ + ’z’ = ‘undo’. After using it day in and day out at work, I started wishing that I had an ‘undo’ action for everyday life. We’ve all done things that we wished we hadn’t, and said things that we would like to take back.”

Rodriguez’s personal work is quite different from his commercial endeavors. When he sits down to paint, he puts aside the pressures of mass appeal and commercial accessibility, and instead focuses on creating art for himself. Drawing from his own life, his paintings brim with memories of family and friends, religious undertones, and iconic elements. A recent piece features a drawing of an audio cassette embedded into a hand grenade. This represents a tough look back at the time when his father left their family to fight a war in Nicaragua, and left only an audio recording to explain his actions. Other paintings depict the biblical stories of Jonah and King David. Yet another deals with a strange coincidence that reminds him of a close relative that recently passed away from cancer.

“I’m overwhelmed by the reaction that I’ve received about my art. I paint about the things that have meaning in my life, and it is amazing to know that it touches others. The messages are simple. Be honest to yourself. Hold yourself accountable for your actions. Never forget. And live your life fully without wishing to hit ‘Kmndz’.” 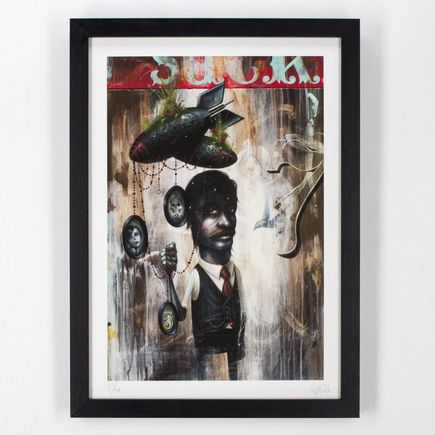 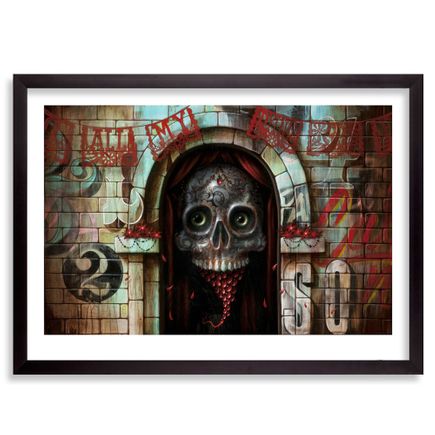 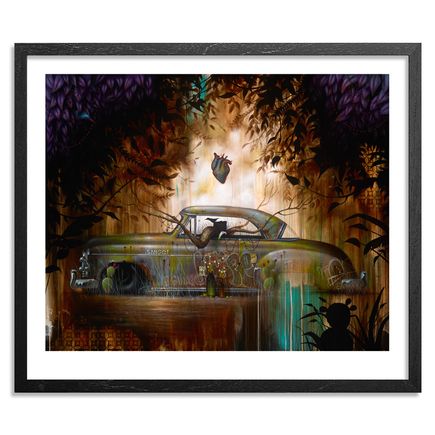