ARCHIVED
Favorite
Favorite this RUN to get notified early and never miss a future release again.
INQUIRE
IN THIS COLLECTION:
Conversatin'
2 Artworks0 Available
Inquire about this RUN
This art is not currently available - but if you would like to inquire further, contact us with this form or @ 313.744.6505
Sign Up for the 1XRUN Newsletter
SEND 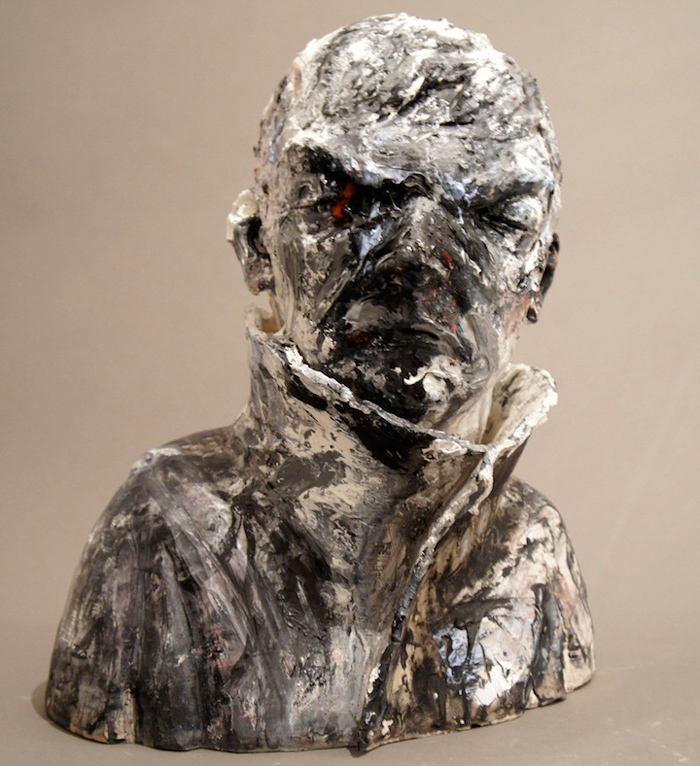 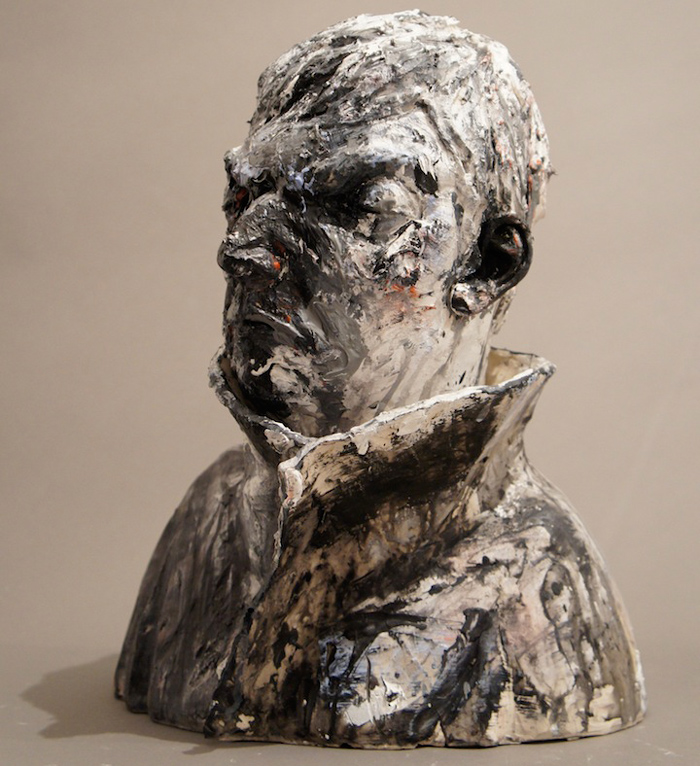 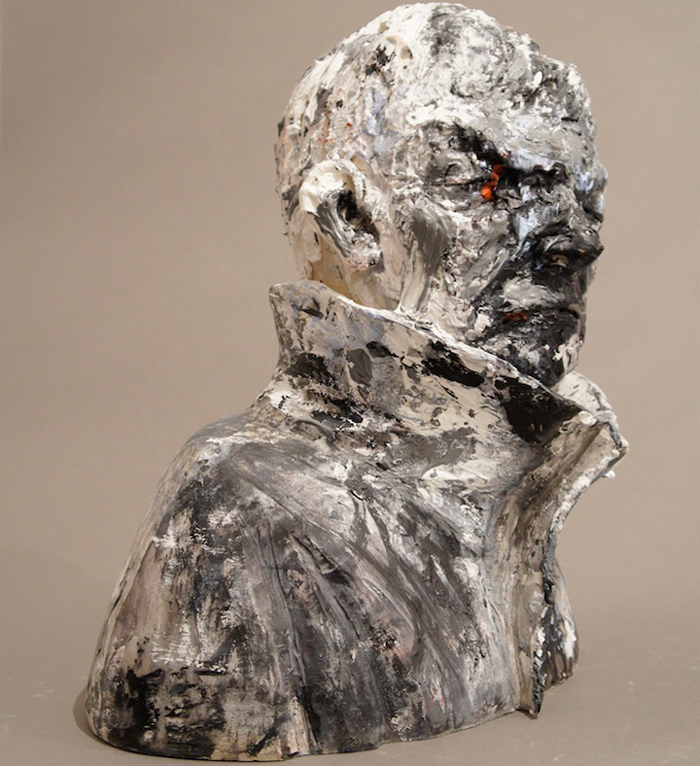 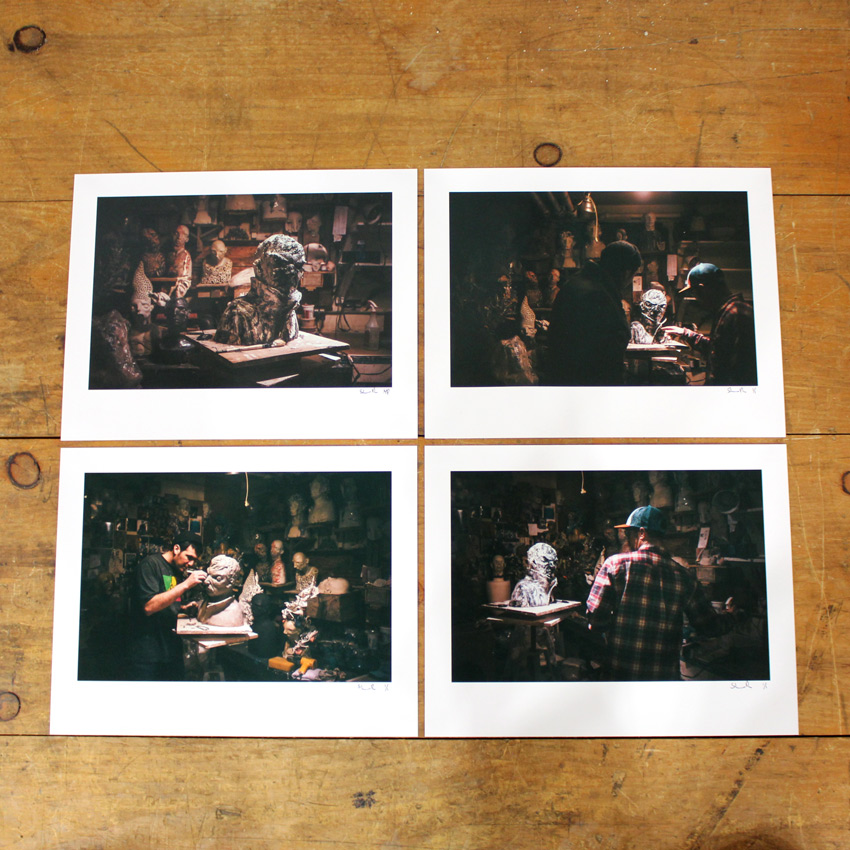 ABOUT THIS ART:
"The subject of the sculpture is an anonymous Washington Square Park visitor. My initial intent was that I would make a sculpture that was very much my kind of aesthetic. Very stylized figuration. I think that really came through, but I found myself loosening up to match and emulate Brett's painting style, as well as to accommodate Shaun's style." - Derek Weisberg

"At first it was tricky, but after about 20 minutes or so I realized that it was the exact same as painting a face on a flat surface. In some ways you have to think like sculptor but approach it like a painter would sculpt a painting. I think most artists are used to isolation and being by themselves. It's nice to be in somebody else's studio, especially if you can hang out with other artists that you admire and respect, you start talking about art and it opens it up." - Brett Amory

"I consider photography to be a form of sculpture as well. Essentially you are just sculpting with light. So I think there are more similarities between the three of us than there are differences. I think the differences are just choice of medium." - Shaun Roberts

This piece of original artwork will be accompanied by a set of 4 additional process photo C-prints from Shaun Roberts and includes an Original Artwork Letter of Provenance signed by Brett Amory, Derek Weisberg, Shaun Roberts and 1xRUN.

MORE
ABOUT Brett Amory + Derek Weisberg + Shaun Roberts:
Brett Amory is an artist currently residing in Oakland CA. Bretts broad recognition has been gained for his ongoing series “Waiting” (2001–), depicting anonymous commuters he encountered in urban settings; it was lauded for its psychological depth and representations of alienation in contemporary society. These paintings are based on photographs taken by the artist, who explained he was drawn to subjects who appeared out of place, alienated, or awkward. In the more recent paintings from the series, Amory began to eliminate parts of the architecture or scenery to heighten the sense of isolation. He paints in a realist style characterized by gestural brushwork and the use of translucent layers of paint for a hazy effect

Find out more at http://www.brettamory.com/

Derek Weisberg is an artist who began sculpting at a very early age starting with the medium of mashed potatoes as soon as he could hold a fork and knife. Moving onto action figure assemblage when he could load a hot glue gun and at age 6 he transitioned into the medium of ceramics which was the beginning of his lifelong love and ultimate passion. He unwaveringly pursued ceramics sculpture throughout his child hood and teens, in Benicia CA where he was raised. At age 18 he moved to Oakland, CA to pursue his love for ceramics and art in general and attended California College of Arts and Crafts.

Find out more at http://derekweisberg.com/

Shaun Roberts was born in Bangkok, 1979, but currently a Photographer living & working in San Francisco, CA. His work has been featured in Wired.com, The Bold Italic, Juxtapoz Magazine, Hi-Fructose Magazine, GQ, San Francisco Magazine, and has photographed for the Fine Arts Museums of San Francisco and the Oakland Museum of California. Shaun's photo narrative short "Dear Texas Highways" was screened at the 2009 South by Southwest Film Festival. He is available for domestic and international assignments.

Find out more at http://shaunroberts.net/
MORE
MORE FROM Brett Amory + Derek Weisberg + Shaun Roberts
Run of 25
ARCHIVED
This run is not on sale. Check the product page for more info.
Favorite 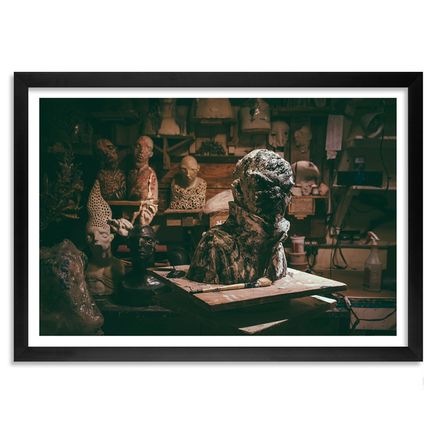