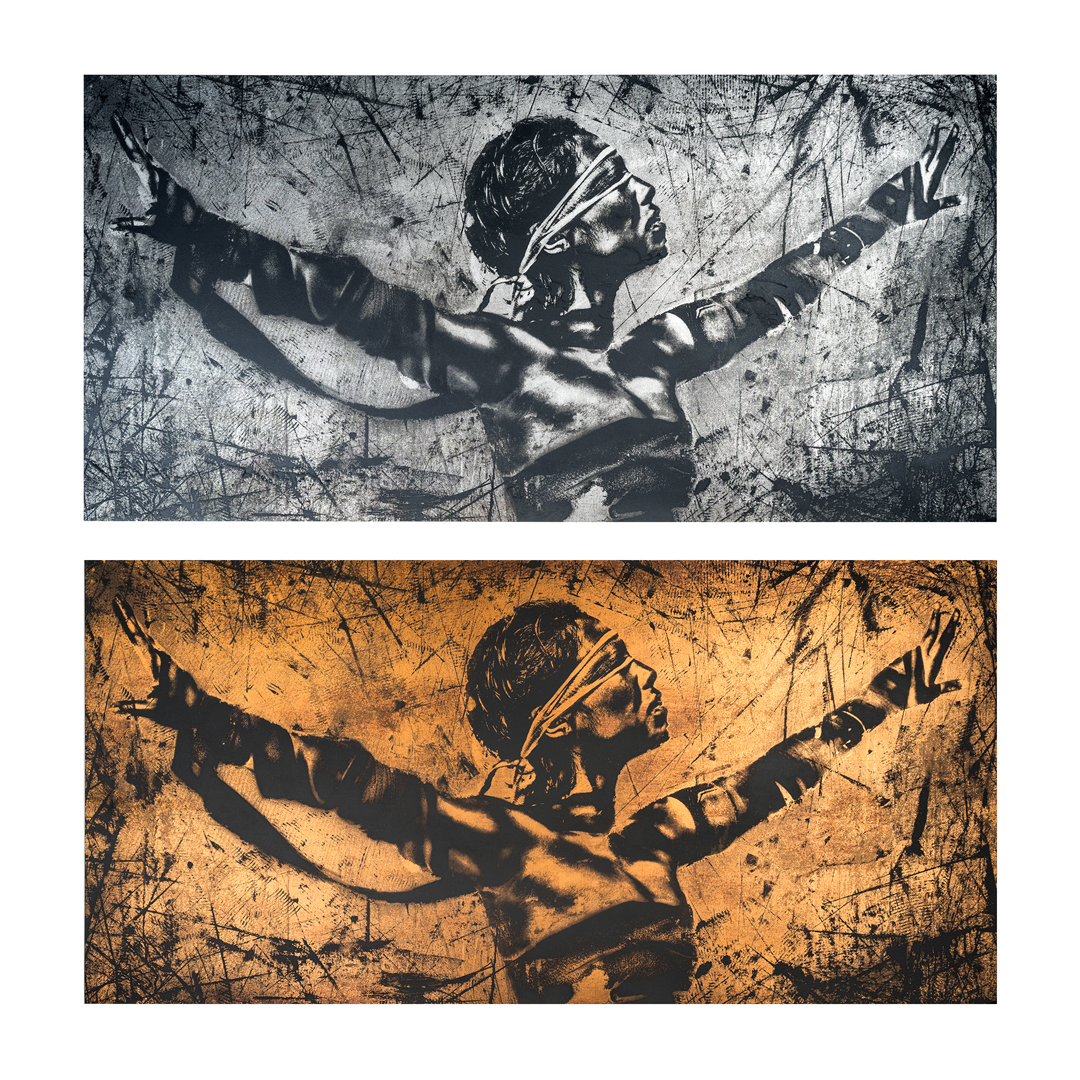 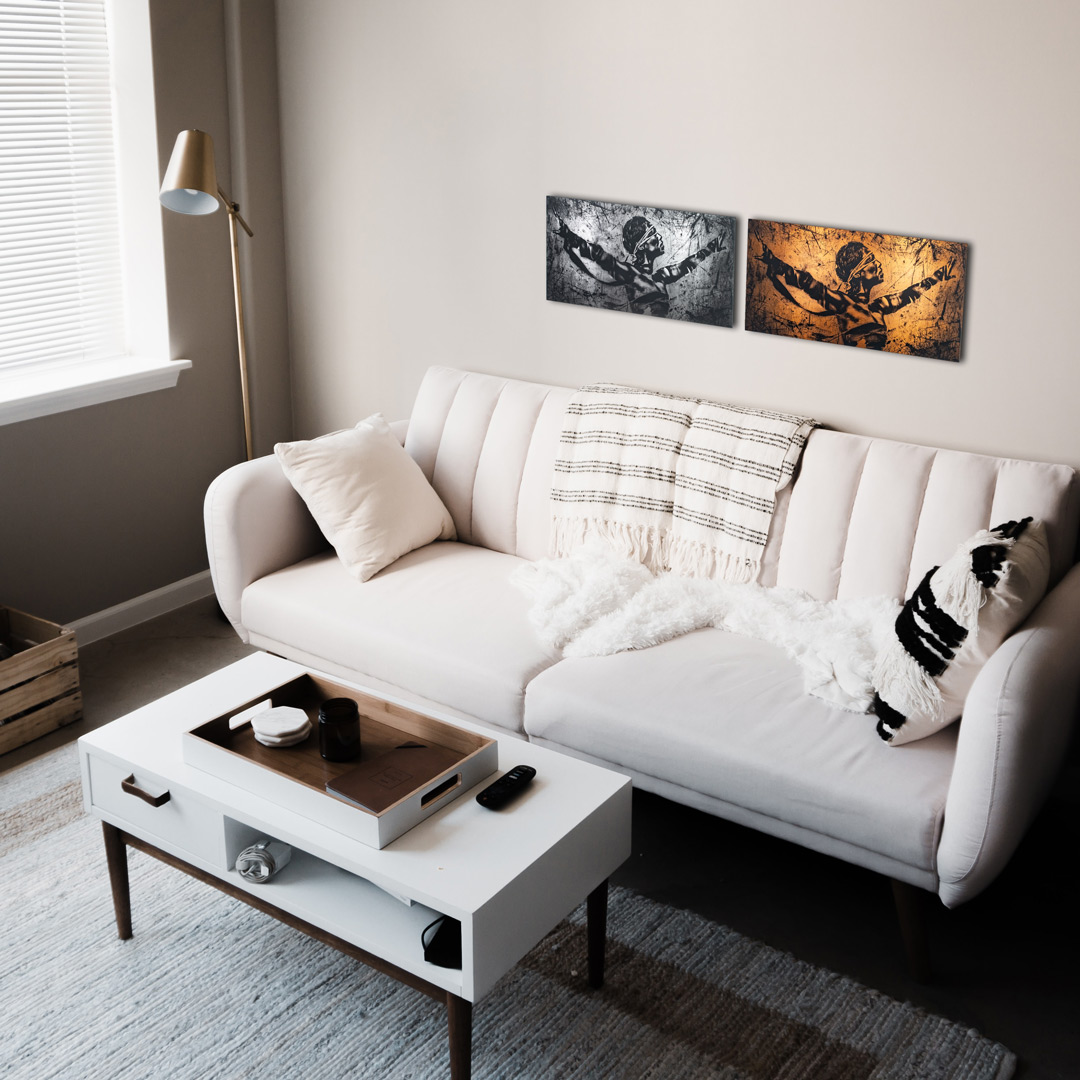 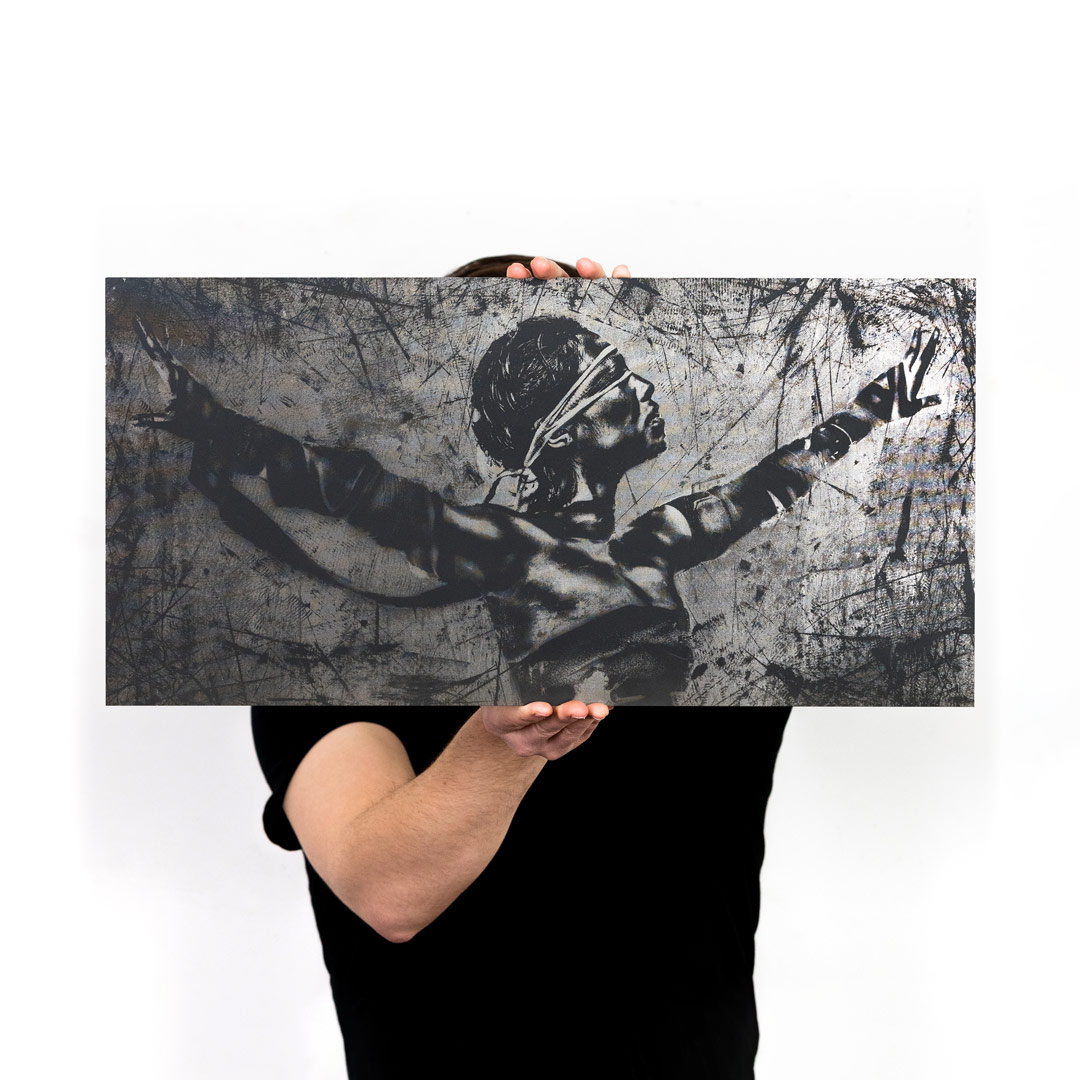 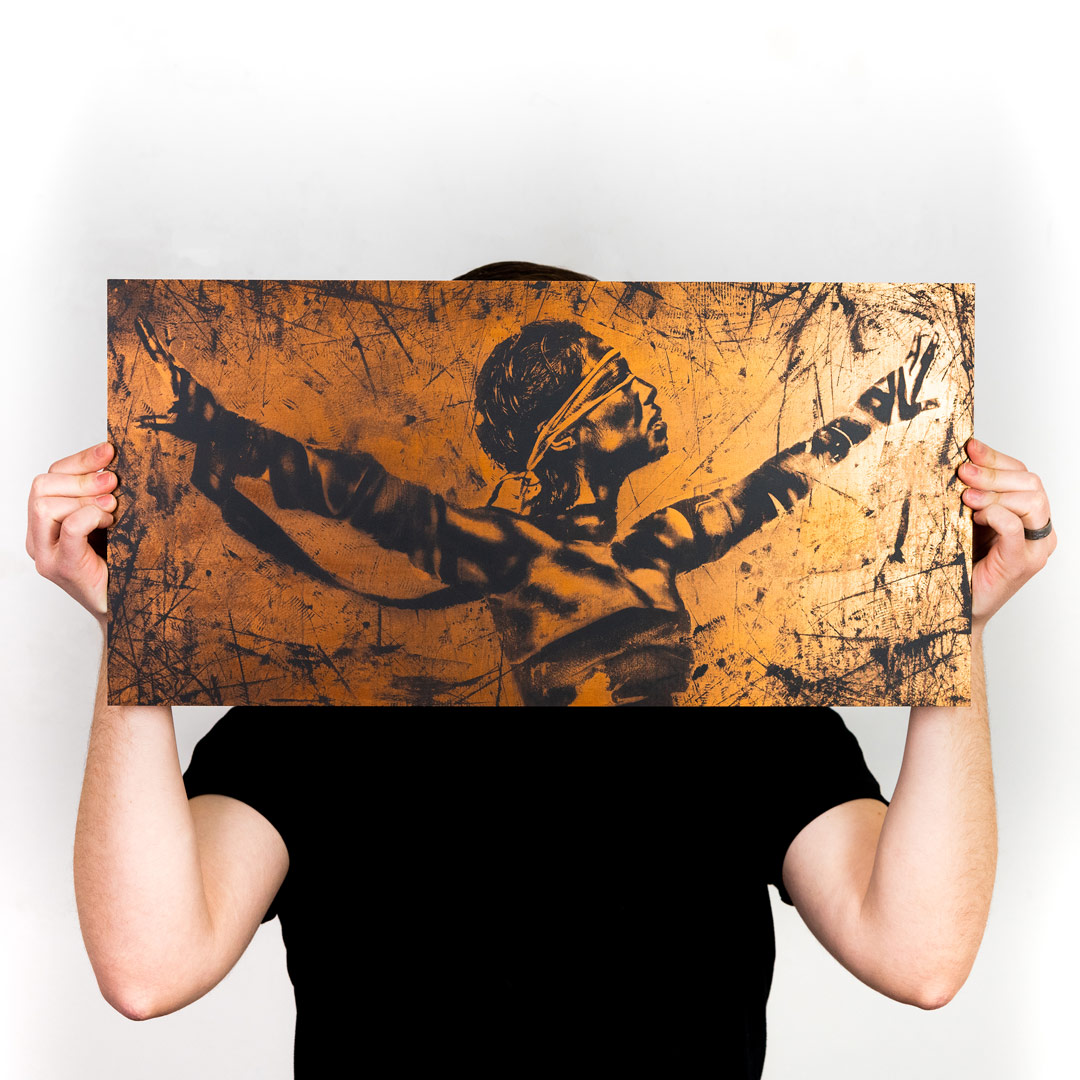 ABOUT THIS ART:
"This piece was made for an exhibition in 2017 called 'Inviolable'. The entire exhibit was very much about a situation not unlike this current pandemic. The characters portrayed are tattered, seemingly exhausted, and in a sort of survival mode. My interest in this is to imagine who people are when the constructs of society are no longer functioning. Infrastructure, economies, technology are all very fragile constructed systems. Imagining that type of an event, I try to investigate primarily two things:

1) What aspects of who we are as humans––both individually and as a race––are inviolable?
2) The idea of atavistic tendencies.

The show was built around this piece of text:

"Each piece in the exhibit was to represent each line of text, 'Faith' being the third line. Oddly enough, 1xRUN and myself began production of this edition well before the current state of affairs. The world is funny sometimes. I can't think of a more appropriate time to release a piece about faith."

"Faith means a lot of different things to a lot of different people. I personally am not a religious person at all, so this is not about religion. It’s really about the things that we strongly believe in, which guide us in times when the outcome is in no way guaranteed." – Eddie Colla
MORE
ABOUT Eddie Colla:
Eddie attended the School of Visual Arts in New York and graduated from the California College of Arts with a BFA in photography/interdisciplinary fine arts in 1991. He began his artistic career as a photographer, working first for the New York Times and later countless magazines, record labels and ad agencies. 15 years later he has morphed into one who counters the all-pervasive nature of commercialism in public spaces. 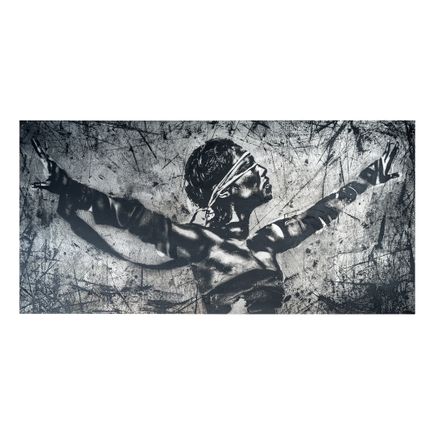 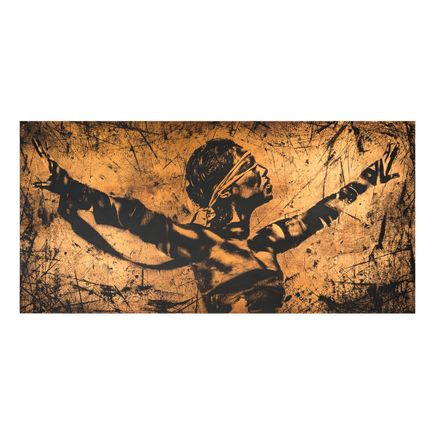 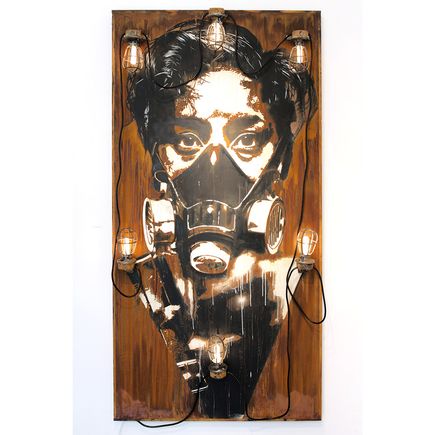 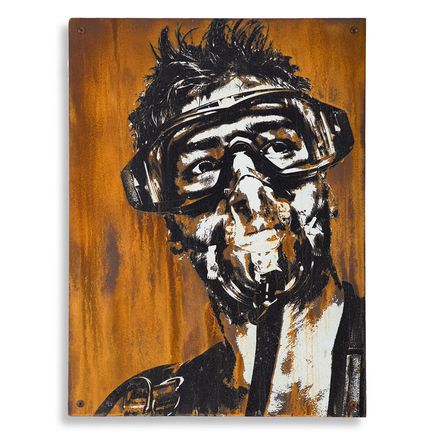 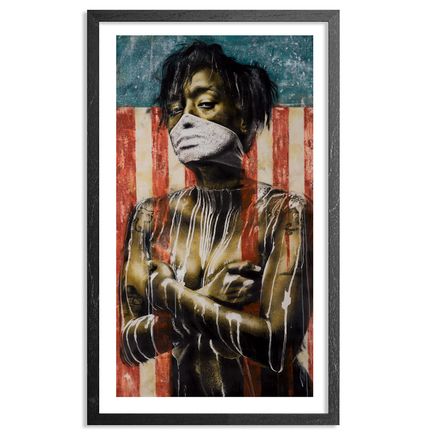 Eddie Colla
The Residue Of Arrogance - Standard Edition
Run of 1
ARCHIVED
This run is not on sale. Check the product page for more info.
Favorite 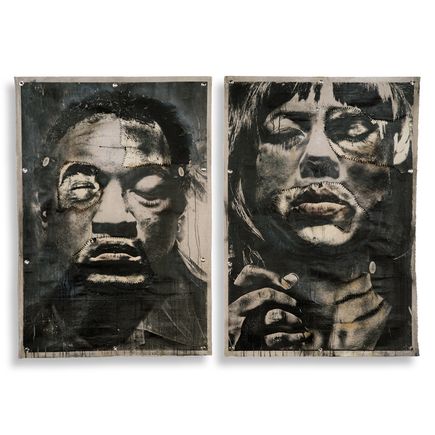