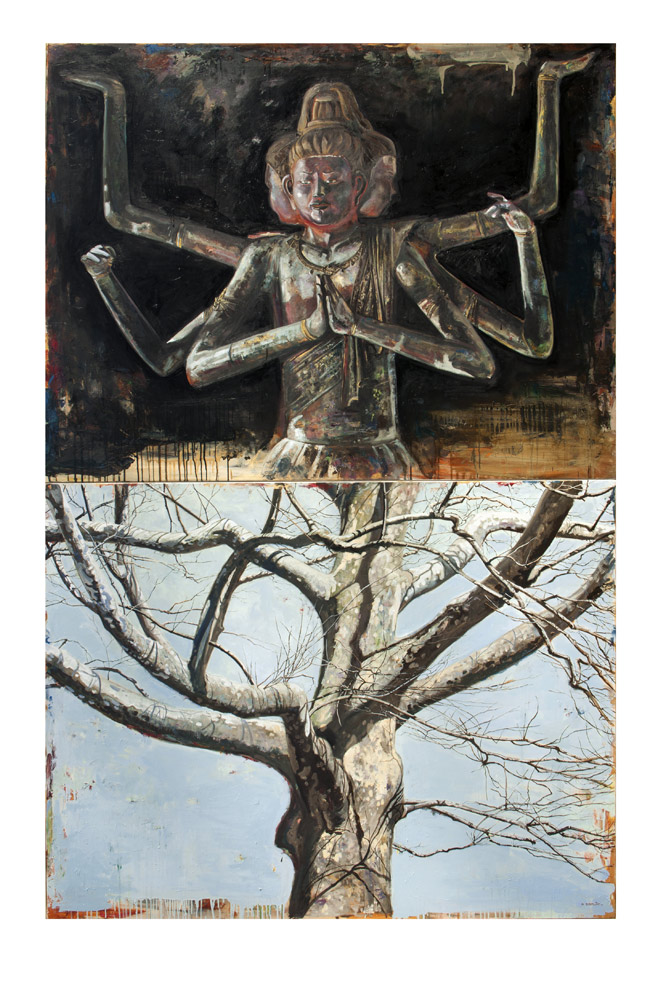 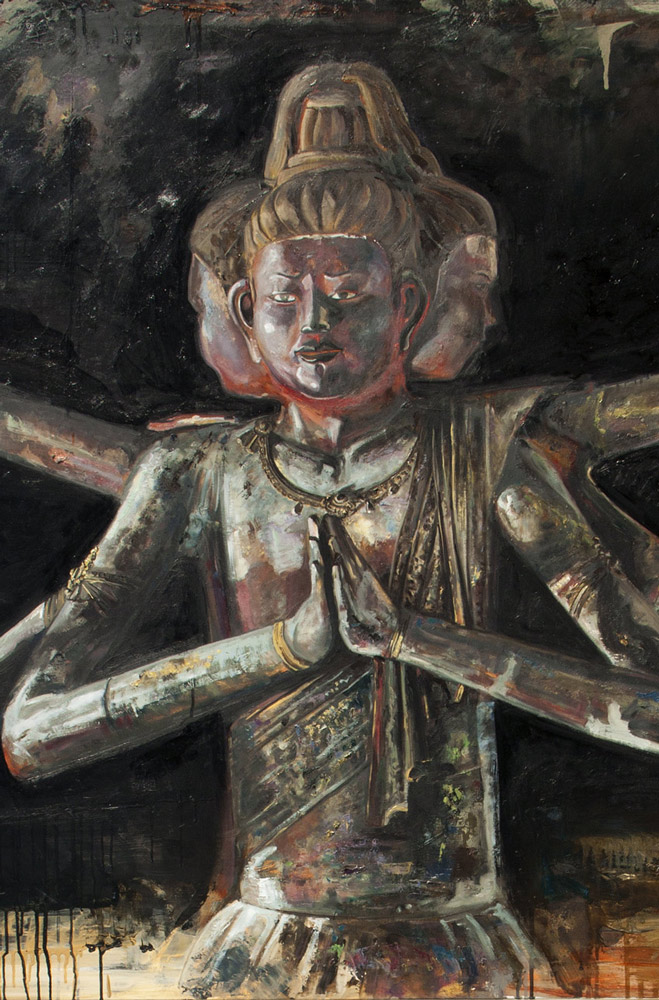 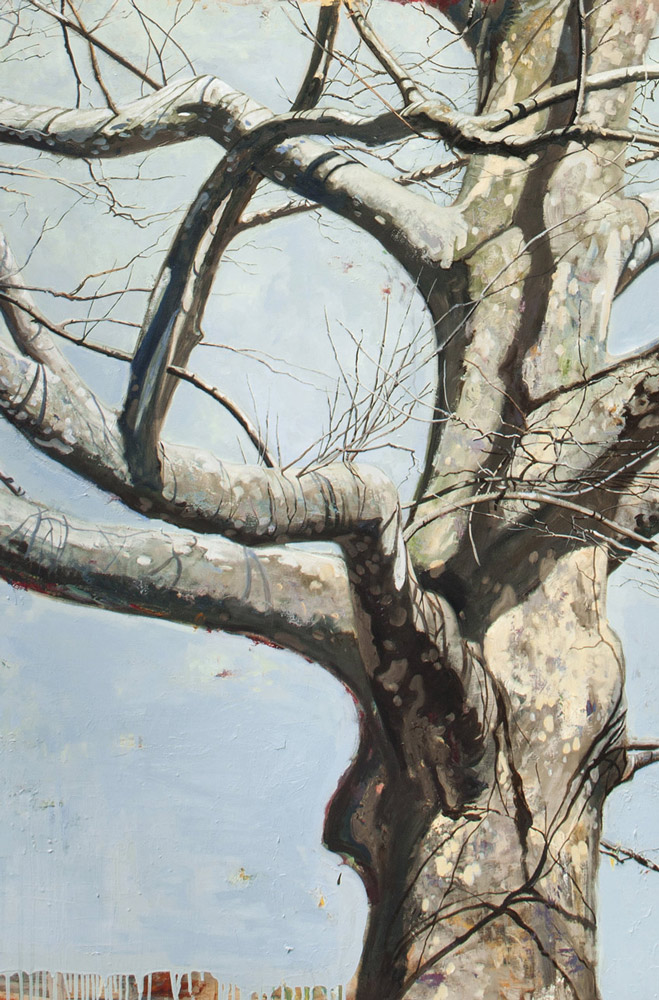 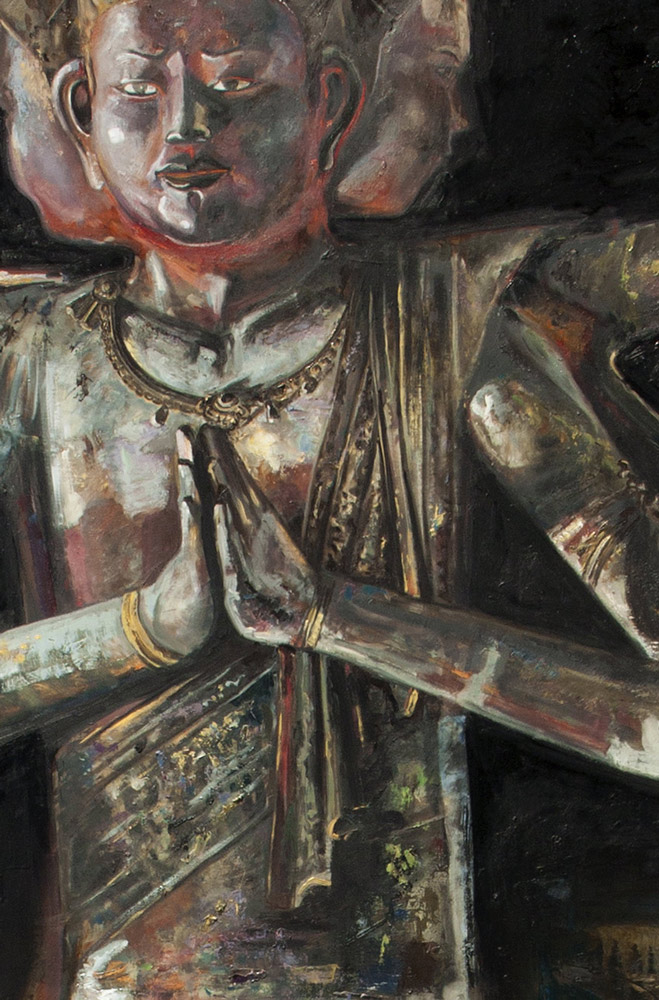 ABOUT THIS ART:
The statue of Ashura is one of the most popular in Buddhism and is the only one of its kind in the world. It is a Japanese sculpture of one of eight categories of beings. This one is very specific because it has been influenced by Indian mythology. Ashura is one of the protectors of the Law of Buddha. He is represented with 3 faces and 6 arms. He is a young man and on the two sides one sees even younger faces. This statue is a very beautiful piece and one that he is obsessed by.
Ashura with his 6 arms overlooks the tree with its 6 most important branches. It is a sycamore tree, which is one of Henry’s favorites to paint. Then even though the link here between Ashura and the tree underneath is more obvious than in any of his other paintings with multiple images, it epitomizes the perfect example of his way of painting.
A few years ago, Henry asked himself how painting could evolve. He realized that we are constantly bombarded by images – advertising, posters, magazines, television - with one inexorably replacing the one before. To retain an image, it had to be a very strong one. Very few images have this capacity. The question became “what is painting and why only one image.” So because we think of different things at the same time, he decided to paint different images in the same painting.

MORE
ABOUT Henry Bismuth:
Born in Paris in 1961, Henry Bismuth came from a family of medical doctors, and it was understood from a young age that he would undertake medical studies. In 1986, at the end of his next to final year of study, Henry Bismuth left medical school realizing that medicine was not his path. He then dedicated his life to his passion; painting and drawing. From then to 1988, he studied art extensively on his own; discovering different artistic traditions and pictorial worlds. It was during this period that his life was forever changed, impacted by great American painters: John Singer Sargent, Thomas Eakins, Robert Henri, Georgia O’Keeffe, Willem de Kooning, Franz Kline, Robert Motherwell, and Andrew Wyeth. Exploring new mediums and influences from East and West alike, he was later exhibited in galleries and museums the world around. For the last few years, he commuted between Paris and New York City, and his focus became less on painting than on conceptualization. His work has been undergoing a major shift, and we now see an emergence of the combination of painterly conceptual and poetic maneuvering that began shaping his process as of late. In 2009, Henry started to exhibit his paintings with Gerald Peters Gallery in Santa Fe, New Mexico. By the end of that year, he had had thirty-five group shows at museums in the United States; and in Winter of 2010, he exhibited at “Arts for a Better World,” at Art Basel Miami.
MORE
CLOSE
FILTER
APPLY
Type
-
Price
-
Availability
-
Availability
-
Country
Availability