SOLD OUT
Favorite
IN THIS COLLECTION:
Salient Sentinel
5 Artworks0 Available 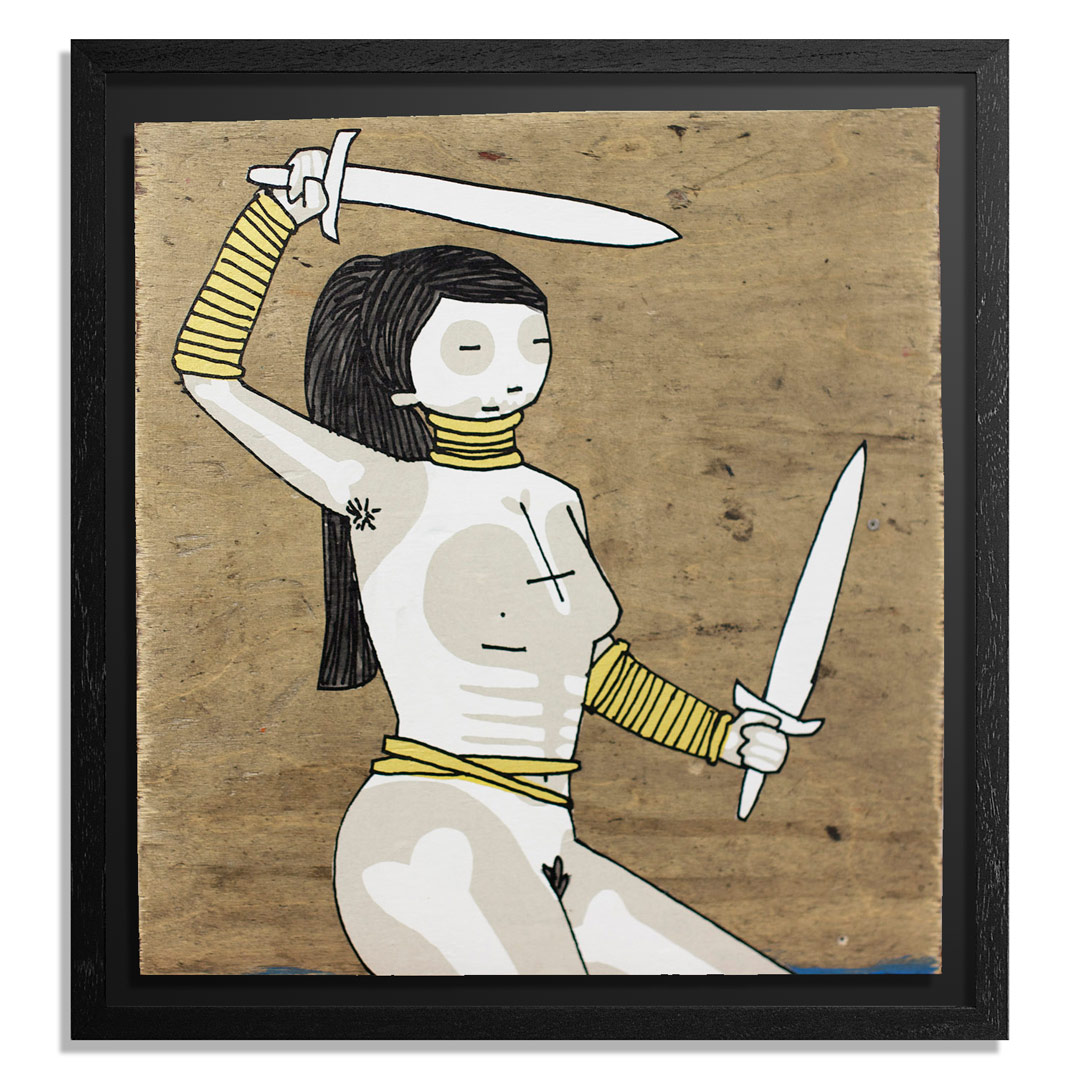 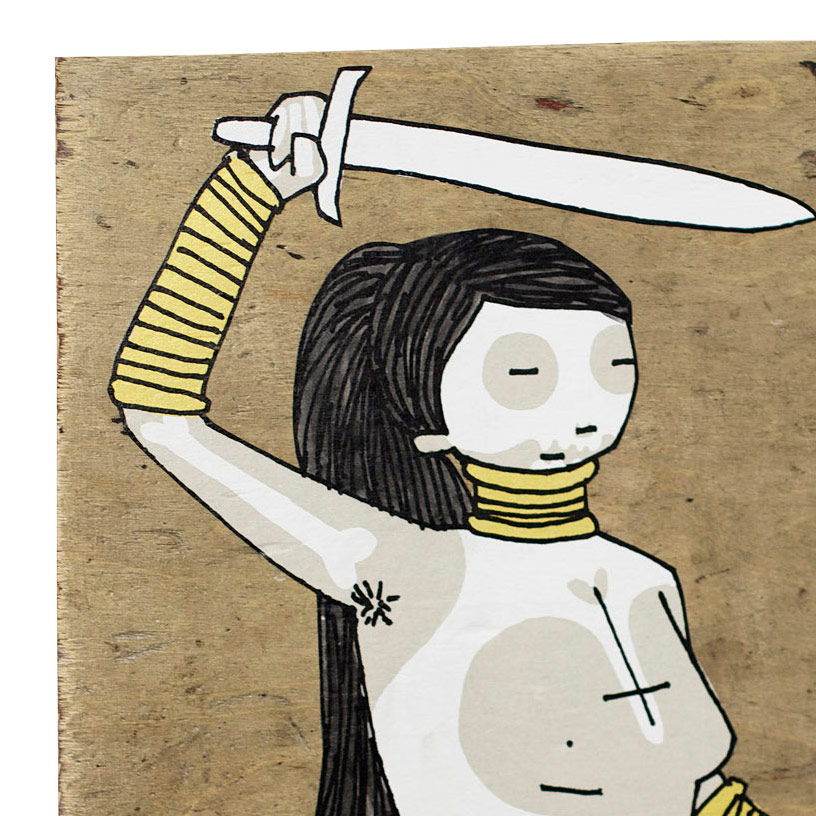 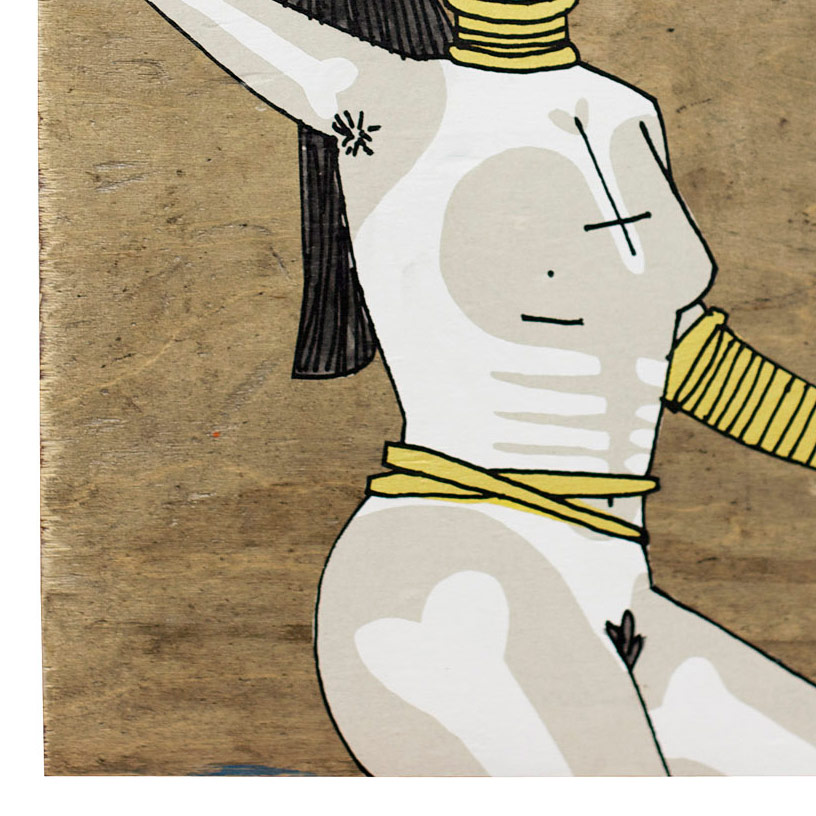 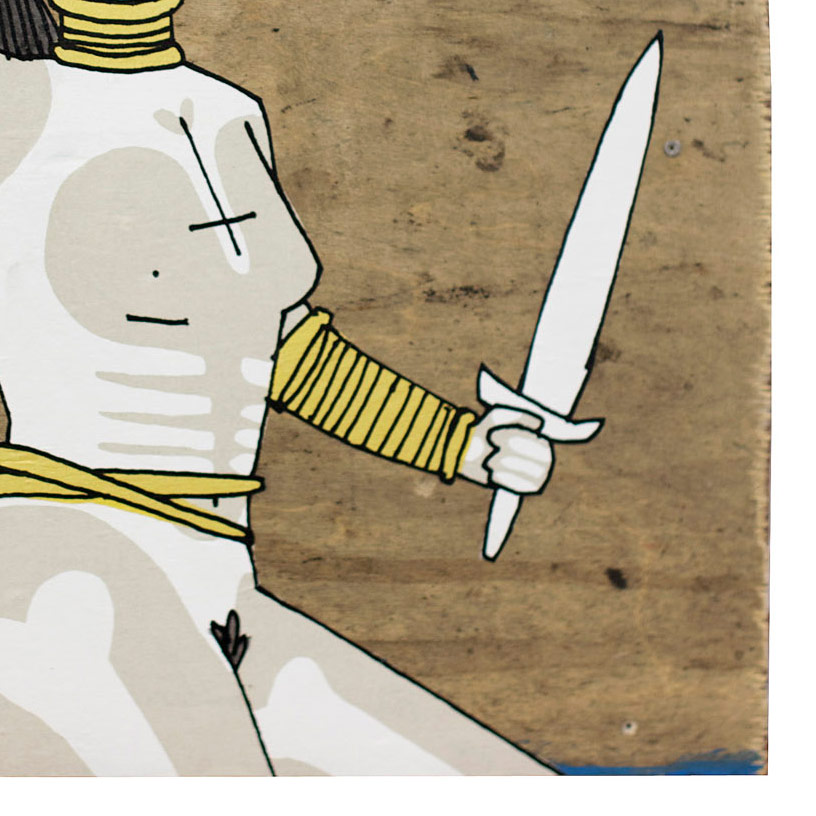 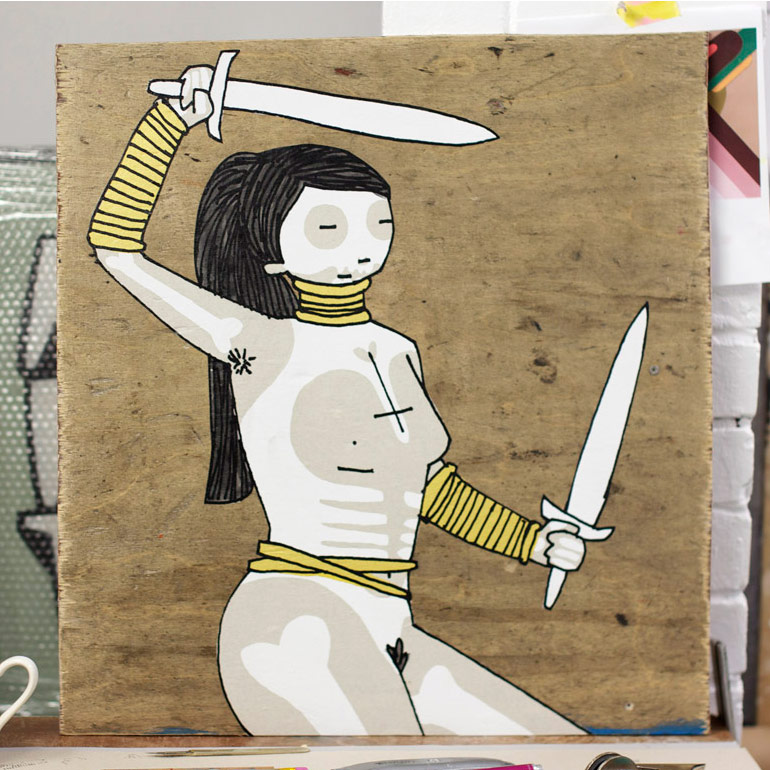 COLLECTORS IN THE UNITED KINGDOM PLEASE NOTE: Please email [email protected] following your purchase to receive a shipping rebate and avoid import fees by receiving your shipment from directly from Kid Acne!

"This character is taken from my most recent series of Stabby Women ‘wheat-pastes’ - an ongoing, international campaign for the past decade. I’ve pasted this particular design in the streets of Paris as well as my hometown, Sheffield. Over the years, the Stabby Women have invaded the streets of New York, Los Angeles, San Francisco, São Paulo, Rio de Janeiro, Melbourne, Berlin, Venice, Milan, Zurich, Barcelona, Munich, Vienna and many more...

Since I started making the Stabby Women wheat-pastes back in 2008, I’ve always made originals on wooden tiles as a souvenir of the street work. The wheat-pastes by their nature are ephemeral, so it’s nice to have some longer lasting examples for posterity. These 2 are made on reclaimed wood, which I salvaged from a local skate park. Each one has a different skin tone, but they are made using an identical process to the ones you see in the street.

I probably spent 2 or 3 weeks in the studio making this series of work. Since the last edition with 1xRun, I’ve gained more experience as a print-maker. As well as making numerous prints for other artists and designers, I’ve also taught screen print workshops at Sheffield Institute of Arts and spent a year working as a print technician at the Royal Collage of Art in London. Aside from the multiple layers, I’ve chosen inks and paper stock, which I feel compliment the image and add a higher level of production value compared to my previous work.

There are tons of artists releasing print editions these days, but I’d say there are very few who are printing the artwork themselves, or who have invested interest in the screen printing process. If you’re looking for a signature piece made 100% by the artist, this print is for you." - Kid Acne
Read the full interview, watch behind the scenes footage and more with Kid Acne at News.1xRUN.com...
ABOUT THE ARTIST:
Kid Acne is a UK-based artist, illustrator, print-maker and emcee. His formative years were spent writing graffiti, self-publishing fanzines and making experimental hip-hop – invariably designing and printing the record sleeves by hand. The combination of these interests informed the development of his own unique aesthetic, first documented in the seminal Scrawl tome (Booth-Clibborn Editions, 1999). A stalwart of the international Street Art movement, Kid Acne has painted large-scale murals across continents and exhibited extensively over the past two decades. Rendered in a distinct illustrative style, his art explores a variety of themes from colloquialisms and typography to mythology and architecture. Most notable however, are his depictions of a self-realised tribe of enigmatic female warriors known as Stabby Women.

Kid Acne’s work can be seen throughout the globe; from wheat-pastes in Melbourne, to gallery shows in Los Angeles, murals in South Yorkshire and animations online. And he still has acne.

Follow Kid Acne on Instagram @ kidacne and Facebook.
MORE
ABOUT Kid Acne:
Kid Acne is something of a modern day renaissance man. Artist, illustrator, print-maker and sometimes, MC. His formative years were spent painting graffiti, making fanzines and releasing DIY punk/hip-hop records from his bedroom in an East Midlands backwater. In the late 90’s his work was first published in the now seminal Scrawl tome, which documented the conversion of counter culture illustration, skateboard graphics and left-field graffiti as a kind of precursor to what is now widely recognised as a 'Street Art' aesthetic.

While studying Fine Art in Sheffield, his work gained the attention of WARP Records executives who commissioned him to illustrate album sleeves for Plaid back in 1999. At the turn of the millennium, his work began to appear as the backdrop for major club nights and in style magazines throughout the UK. His illustrations have now adorned products for leading brands, such as Levis, Prada and Kenzo whilst his inimitable art can be seen throughout the globe, in wheat-pastes, murals and gallery shows from Beijing to Azerbaijan.

He is currently working on a series of short animations for Channel 4, for which he also provides the voice of the lead character, Zebra Face along with a cast of British talent, such as Roots Manuva and Jarvis Cocker. 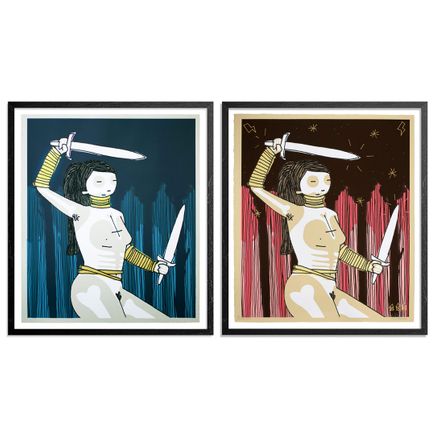 Kid Acne
Sphinx - Black on White Edition
Run of 3
ARCHIVED
This run is not on sale. Check the product page for more info.
Favorite 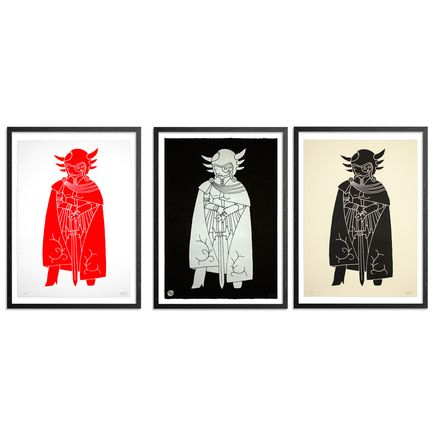