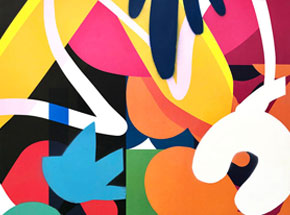 Edition 1 of 14SOLD OUT
Don't miss the next Maser release!
Subscribe to our newsletter and be the first to know about new product releases. You will also receive:

• Early Access
• Exclusive Content
• Artist Features & Interviews
SIGN UP
About The Work
About The Artist
"A lot of my works focuses on relationships. That's stemmed from working in the public realm for the majority of my artist career. How the public interact and engage with my large outdoor murals, led me onto building interactive installations so people can engage with the '3d paintings' Over the past few years this idea of relationships and the environment has found me looking at botanics and their role and effect on us. Primarily out of interest but it has lead me to understand the importance of certain plants, in regards to our health, mental health, sleep, anxiety etc. It has naturally brought me to the National Botanical Gardens Dublin Ireland to sketch and take photos of the plants I've found of interest. From those sketches and photographs I've integrated their loose forms into my 'hard lined' art and applied the new compositions to my print works." - Maser
CONTINUE READING
Maser is an artist originally from Ireland. As early as 1995 under the moniker ‘Maser’, he began painting graffiti on the streets of Dublin, where he soon earned the respect of other graffiti artists in Ireland and throughout Europe for his unique abstracted style. After studying Visual Communication at Art School in his home city, he went on to establish himself as one of Ireland’s leading visual artist working in the urban environment.

In 2013 he worked with Tandem Press at the University of Wisconsin-Madison, Wisconsin, USA to create an edition of fine art prints, which were recently exhibited at IFPDA Print Fair 2014, New York, Ink Miami and Expo Chicago.
CONTINUE READING
More From This Artist
EDITION OF 75
16 x 20 Inches
Lithograph and Flouro Mix Print on Fine Art Paper
SEE DETAILS