SOLD OUT
Favorite
IN THIS COLLECTION:
Momoka & The Misery Girls
6 Artworks 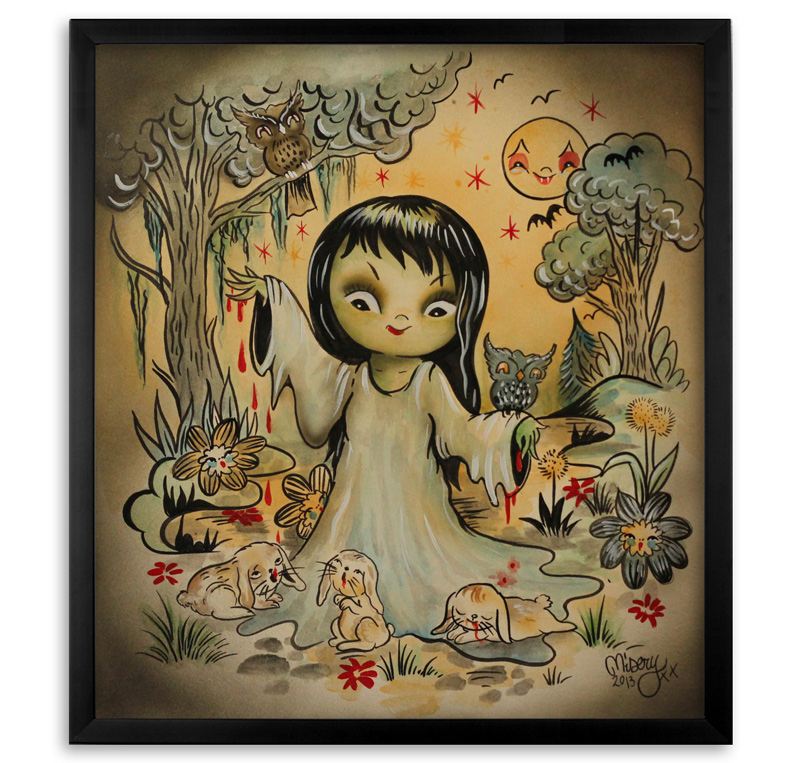 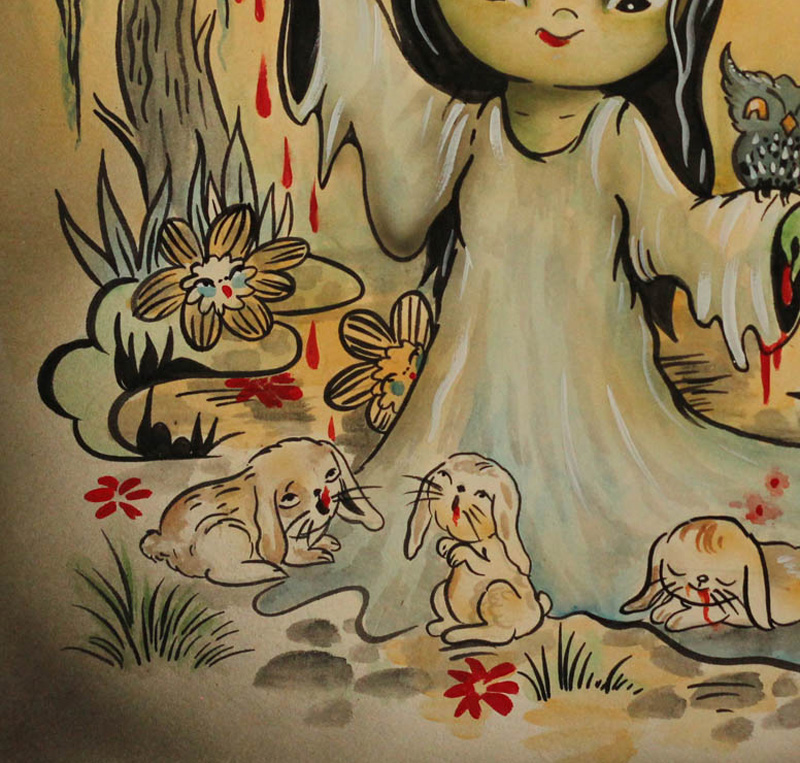 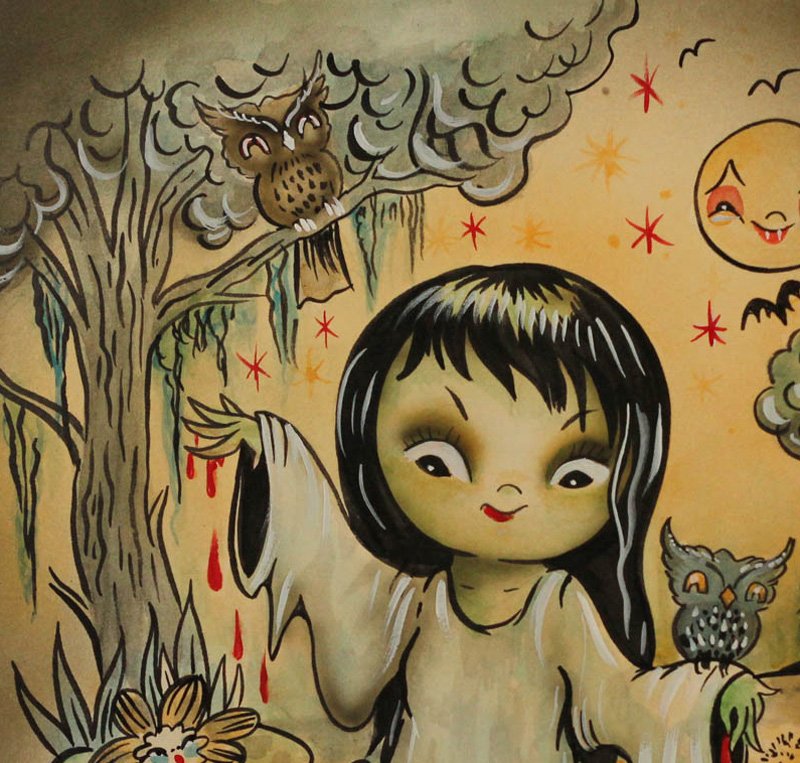 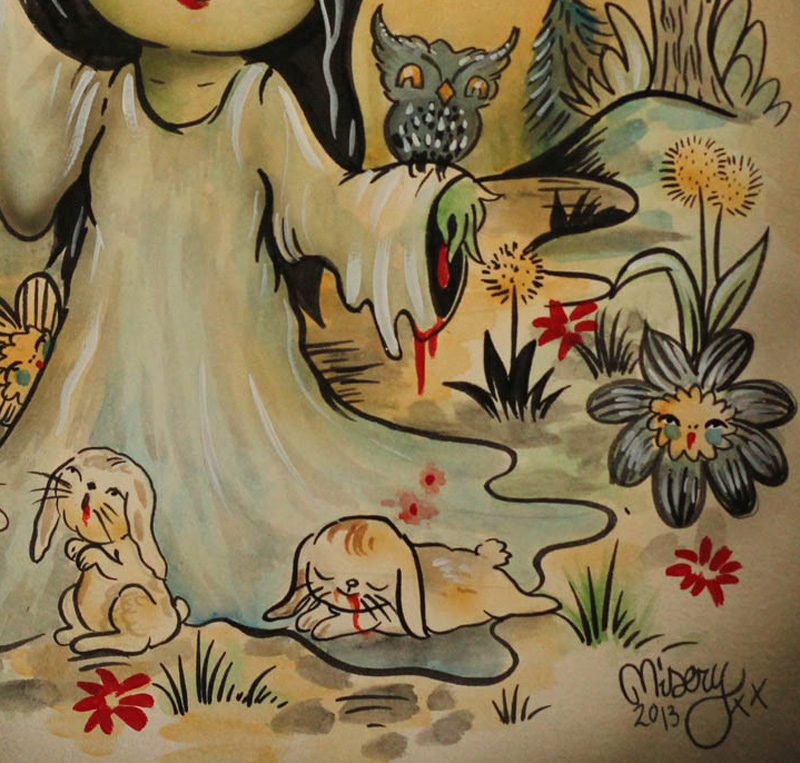 
"I found a beautiful image from a Japanese children's fabric design book of a silk kimono from the 1950's. The design was based on strange characters from a Folklore tale of a crab, monkey and chestnut. I was really inspired by these illustrations and at the same time going through an obsession with drawing vegetables and mythical garden creatures. So the idea of Momoka was created. Her story is a little Alice In Wonderland meets a vegetable love story. Momo is lost in a vegetable patch when she is cursed by an old toad who transforms her head in to a peach tree log. This painting is a pre-evil curse when Momo finds herself lost in the vampire night garden. I wanted the art work to have a rich and velvety colour palette and feel serene but also dark and dangerous, with man-eating plants and bloodlust bunny rabbits." - Misery

This piece of original artwork is signed by Misery and comes with an Original Artwork Letter of Provenance from 1xRUN.

MORE
ABOUT Misery:
Born Tanja Jade Thompson in Maryborough, Australia in 1982, she’s one of many creative women spanning four generations, her mother a costume designer, both grandmothers were painters and great grandmother a commercial artist for the Auckland Civic Theatre; it’s no surprise her work now graces the streets and galleries of Auckland City and the world. Her fascination with unique characters started at just three when she fantasized about marrying Boy George and fighting crime with Astro Boy.

Her Chinese Tahitian grandmother meme, fostered Tanja’s artistic talent teaching her to master a perfect coconut tree. Her meme is also credited with inspiring Tanja’s intense passion for Pacific and Asian art during their time together and on trips to Tahiti, which is still evident in her work today. These influences, along with an ongoing love for obscure Japanese cartoon characters, a fascination with cults, shines and gods, and fantasies of all things magical and whimsical soon collided in her imagination and her unique characters began to evolve.

In her teens her mother had the genius to enroll her in Metropolitan College, a school with an emphasis on art. Here she cultivated and defined her distinct characters, portraying a certain darkness and vulnerability drawn from her own emotions, life and dreams. They would later epitomize her name; Misery, a name gifted by fellow artist Askew. However, over time the depth of the darkness and vulnerability of her work began to consume her. External influences continued to cast further shadows which led Tanja to a ceremonial burial for Misery. RIP Misery, if only for a few years.

As time passed so did the darkness. She was inspired and invigorated by art projects working with vulnerable children abroad, travelled renewing her love of Asia, found true love, a love built on magical vegetables and ironically sealed by marriage in a vegetable patch. The time had now come to resurrect Misery into a new more fantastical Technicolor Miseryland, filled with mystical creatures. It’s more playful in Miseryland now, more humorous, naturally there are a lot of vegetables and it has an effervescence we’ve not seen there before. Her characters retain their distinction, still with a pinch of twisted quirky dark humor. Yet, there is little doubt the cloud has lifted and Misery is the happiest she’s ever been in Miseryland, surrounded by an eclectic mix of new friends which now collide in Tanja’s imagination.

Misery is no longer limited to just walls and paper, her work can be seen on vegetables, computer screens, within environments, on sets, collaborations with other artists, practical products and gracing classroom walls for refugee children in rural Thailand. Misery is now renowned worldwide for her characters and graffiti/ street art, and has gone on to achieve mainstream success including representation with New Zealand’s premiere art auction house Webbs, and exhibitions in all corners of the globe including Berlin, Taiwan, Melbourne, Paris and Los Angeles.

MORE
MORE FROM Misery
Run of 20
ARCHIVED
This run is not on sale. Check the product page for more info.
Favorite 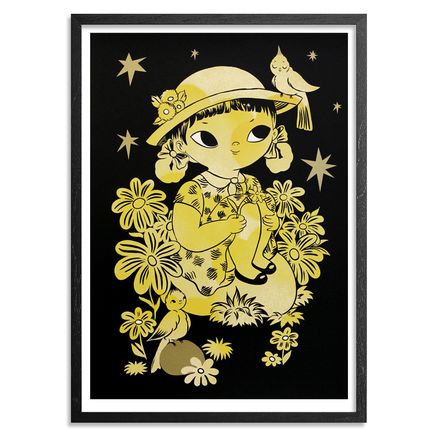 Misery
Birdwatching - Yellow Edition
Run of 15
ARCHIVED
This run is not on sale. Check the product page for more info.
Favorite 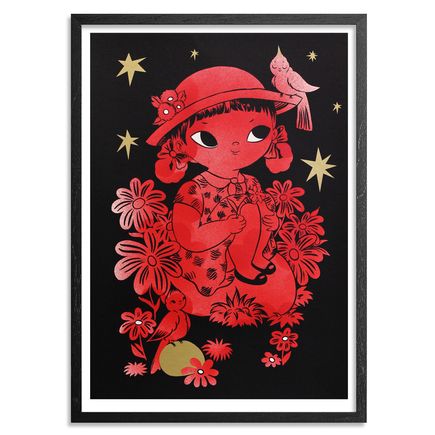 Misery
Birdwatching - Red Edition
Run of 1
ARCHIVED
This run is not on sale. Check the product page for more info.
Favorite 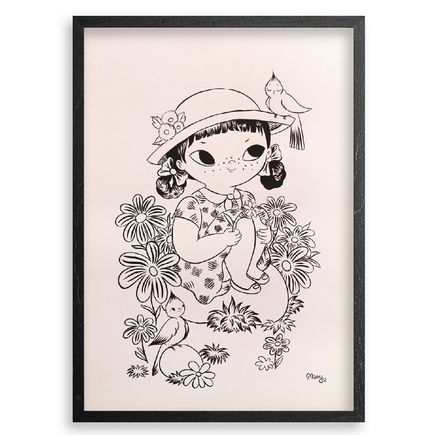 Misery
Bird Watching - Original Artwork
Run of 1
ARCHIVED
This run is not on sale. Check the product page for more info.
Favorite 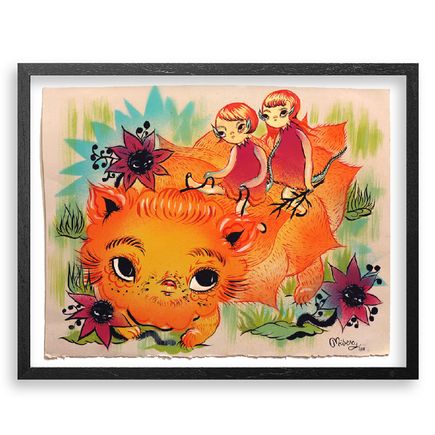 Misery
Armadillo And Spock Girls - Original Artwork
Run of 1
ARCHIVED
This run is not on sale. Check the product page for more info.
Favorite 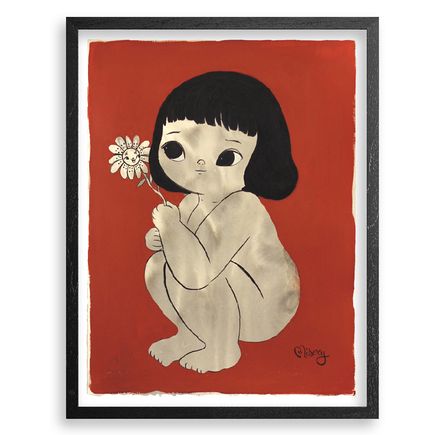 Misery
Lola And Daisy - Original Artwork
Run of 40
ARCHIVED
This run is not on sale. Check the product page for more info.
Favorite 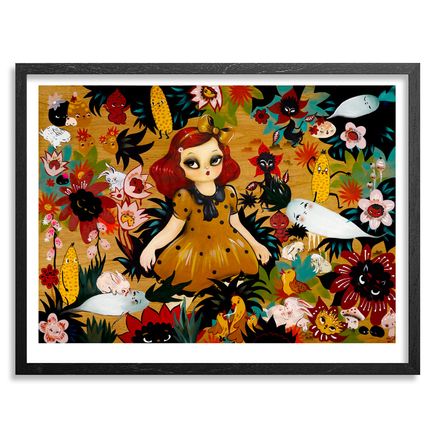