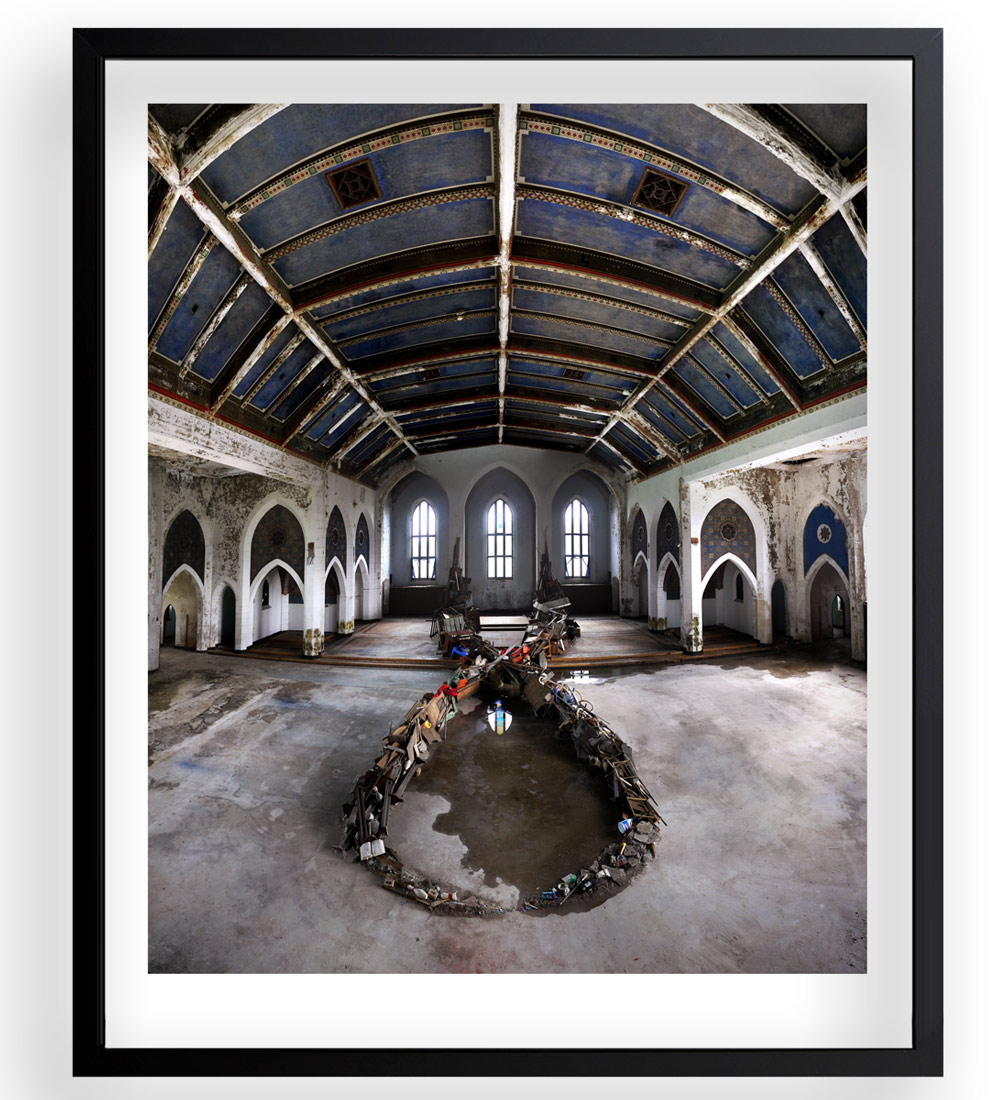 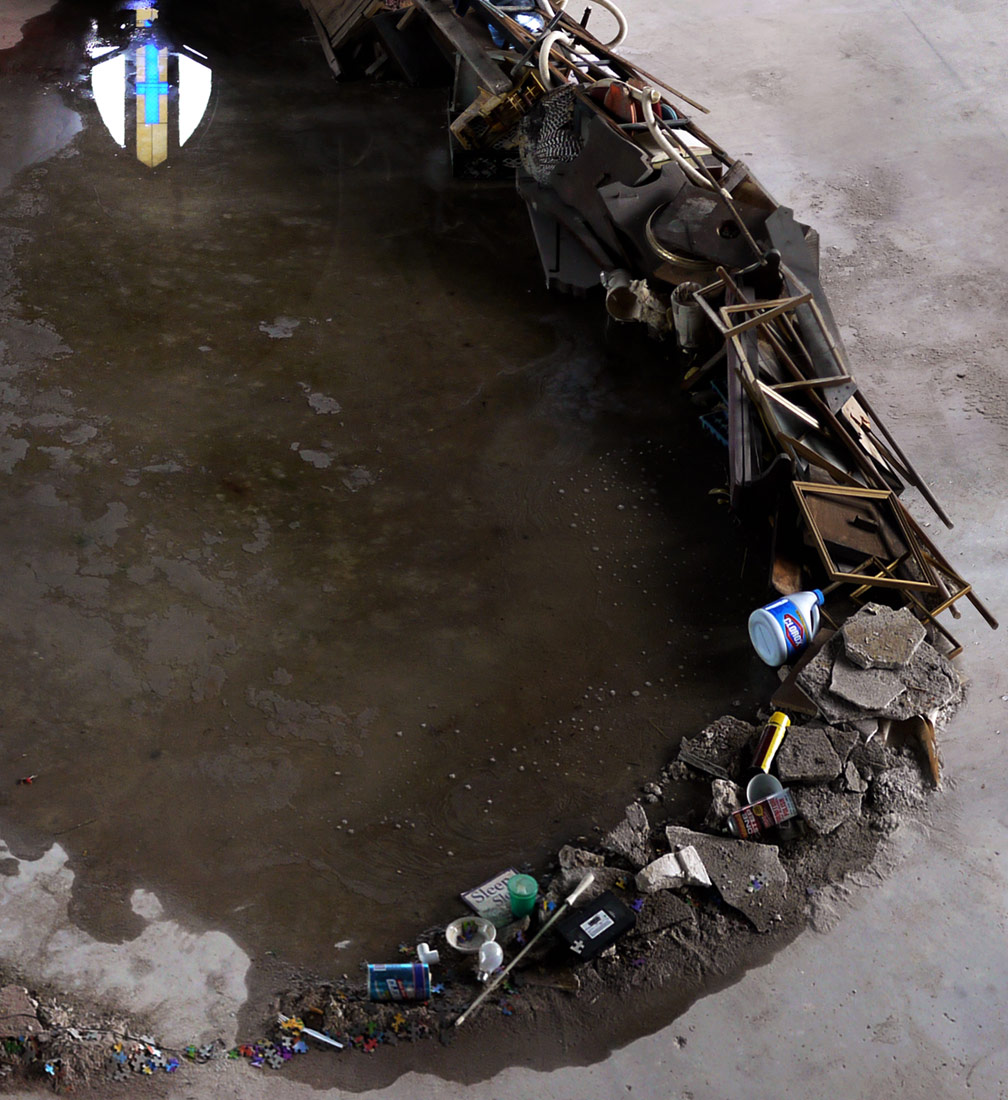 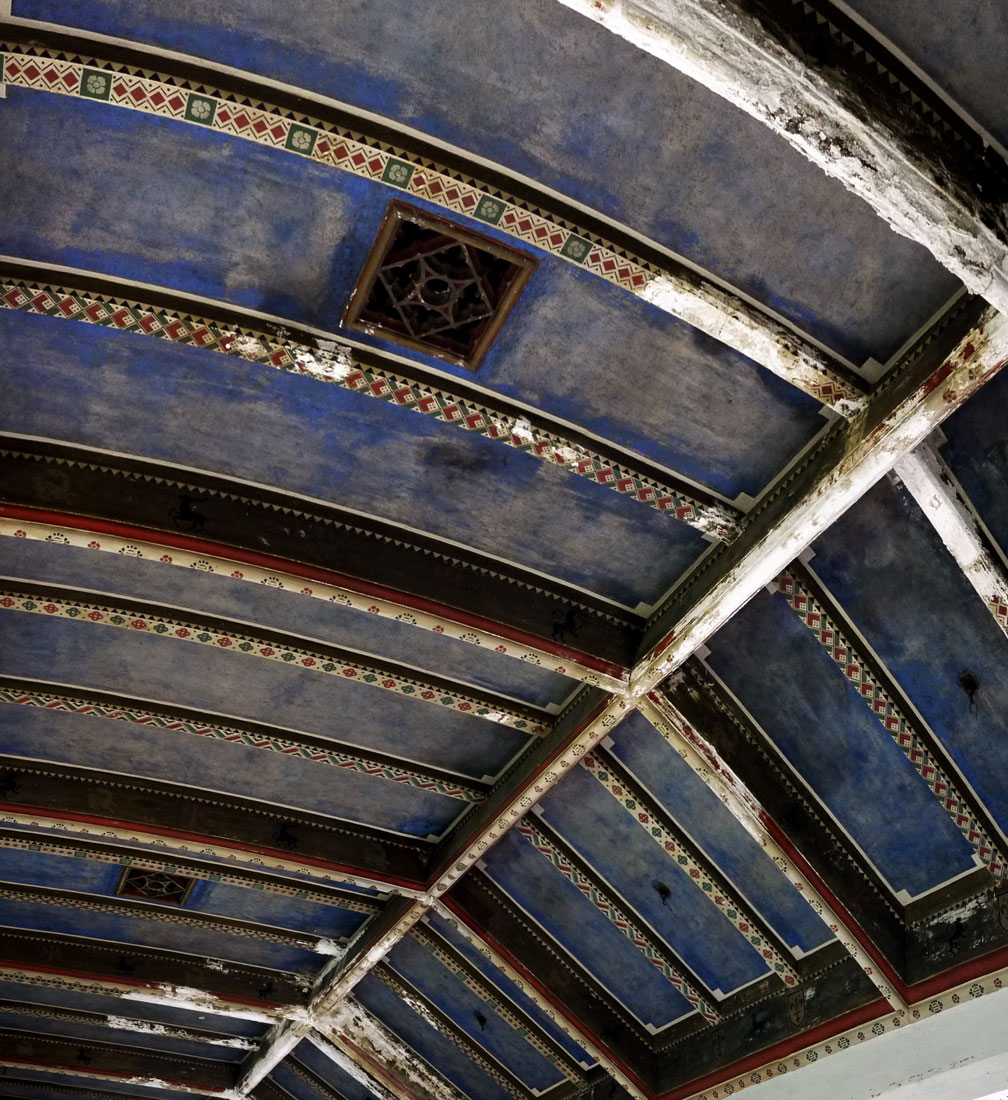 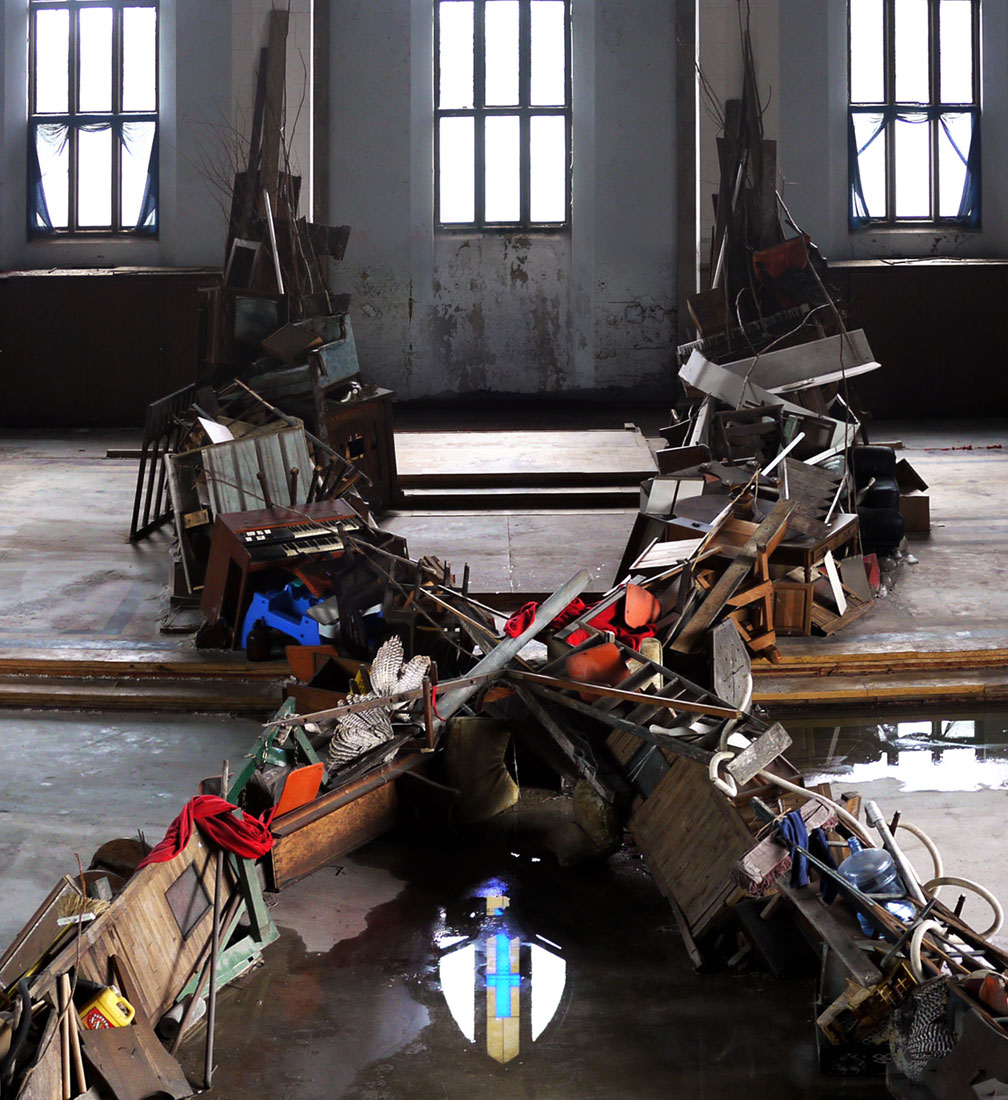 The framing option on this RUN includes a 1 inch black wood frame with UV-glass, foam core backing and ready to hang hardware.

Artists Jim Darling and Revok recently collaborated on this found object art installation in an abandoned church in the heart of Detroit. Working on the piece for two days, the artists dragged an organ up two flights of stairs along with any other pieces of debris in the vicinity they could use to assemble the infinity symbol shown here.

"When we started this there wasn’t a plan at all. We drove around for a few days just looking at everything. He took me everywhere in Detroit. The church we picked was one of the buildings we looked at on the first or second day of my trip. There were a lot of great elements to work with and the building was amazing. It took us about two and a half exhausting days to complete." - Jim Darling

"It actually came together much faster than a typical "mural wall" or a piece I create in the studio, however it was much more physically laborious, which was really good! I remember carrying a giant organ and a piano up two narrow flights of stairs from the basement. Jim and I decided it would be most satisfying to create the installation only from objects and materials we could scavenge from the site itself. The church is massive so we carried all kinds of big heavy shit and swept 2 inches of dirt from the entire floor where the installation was created." - Revok
MORE
ABOUT Revok + Jim Darling:
Jim Darling is a mixed media artist living and working in California.

Darling grew up in the suburbs of Dallas where he spent his time at the creek making forts and exploring. More often than not, he found himself grounded. When he wasn't climbing out the window he was usually drawing As a junior in high school he took his first art class. As a senior he realized art school was an option.

Darling received his BFA in graphic design from Rocky Mountain College of Art & Design in Denver. That is where he met his wife Tina, who he collaborates with often. Day to day Jim works as a creative director / designer in addition to the artwork and he is now a father of two.

Darling's gallery work ranges from intricate ink drawings, layered wood work with illustrative painted skins, to freestanding sculpture. Outside, Jim expands his tool set by including found objects and materials. His subject matter lives between play and real. Large issues are often looked at in simplistic terms and are usually juxtaposed by intense detail.

Find out more at http://jimdarling.com/

Born in Riverside, California in 1977, Los Angeles based artist Revok discovered art through his father's collection of 60's & 70's album covers, comic books, and skateboarding. In 1990 Revok began sneaking out of the 2nd story window of his parents home to write graffiti around his neighborhood...21 years later not much has changed despite numerous arrests, jail time and fines in the U.S. and overseas.

Revok enjoys traveling and painting graffiti. He was recently the target of a political war against graffiti and street art led by Los Angeles city attorney Carmen Trutanich and the L.A. Sheriffs department. His work explores the struggle between opposing perspectives that is perpetual action around us in our shared common spaces.

In 2011 Revok was featured in Museum of Contemporary Art Los Angeles' in the "Art In The Streets" exhibition. The Pasadena Museum of Contemporary art's "Street Cred", "Perseverance" at KNOWN gallery and "Triumph & Tragedy" in Hamburg's Vicious gallery. REVOK's latest body of work "Ordinary Things" features dozens of assemblages created with pieces of Detroit's lost and forgotten areas. The recent body work has been shown over the past 6 months to worldwide acclaim at galleries in Detroit, Los Angeles, New York, Miami and London.