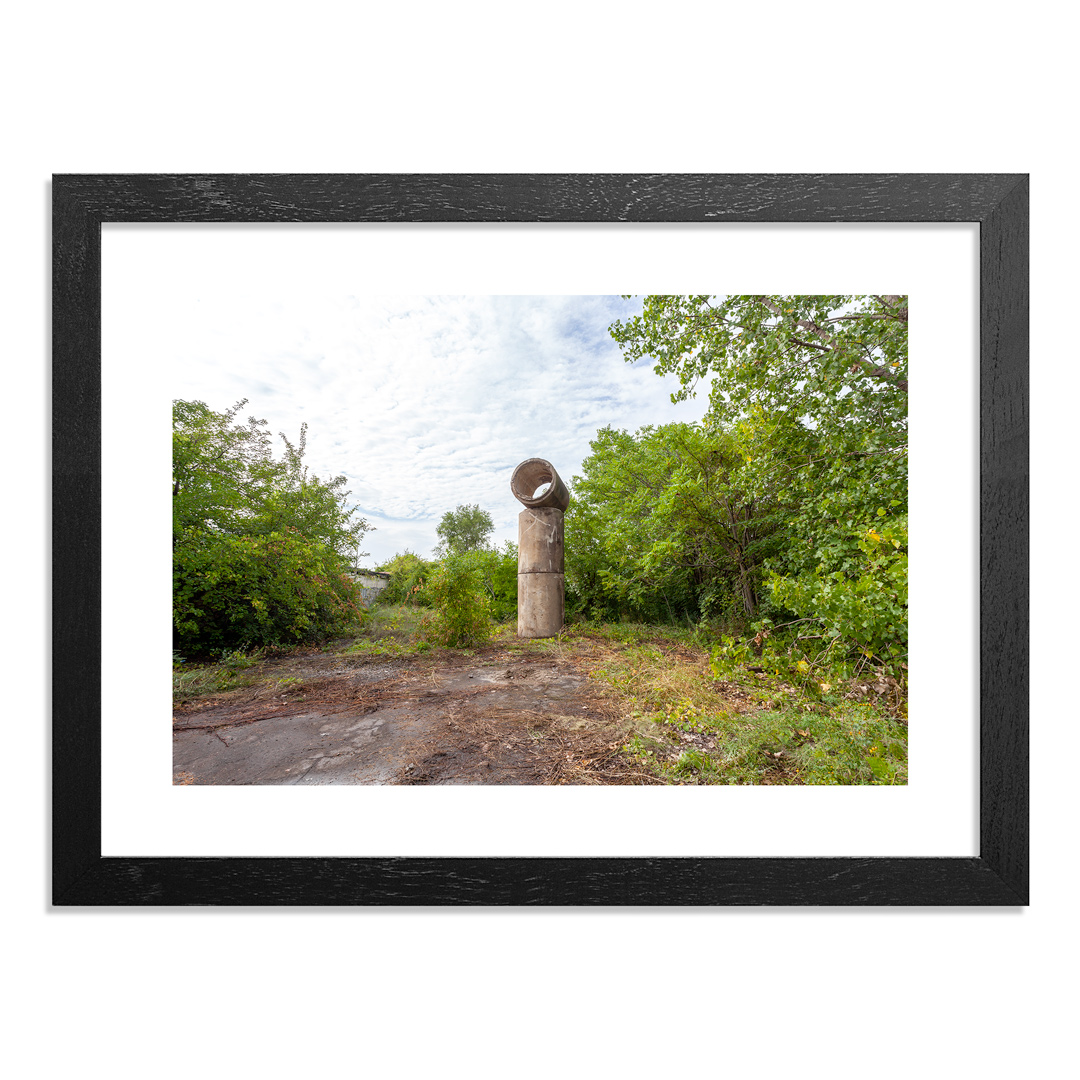 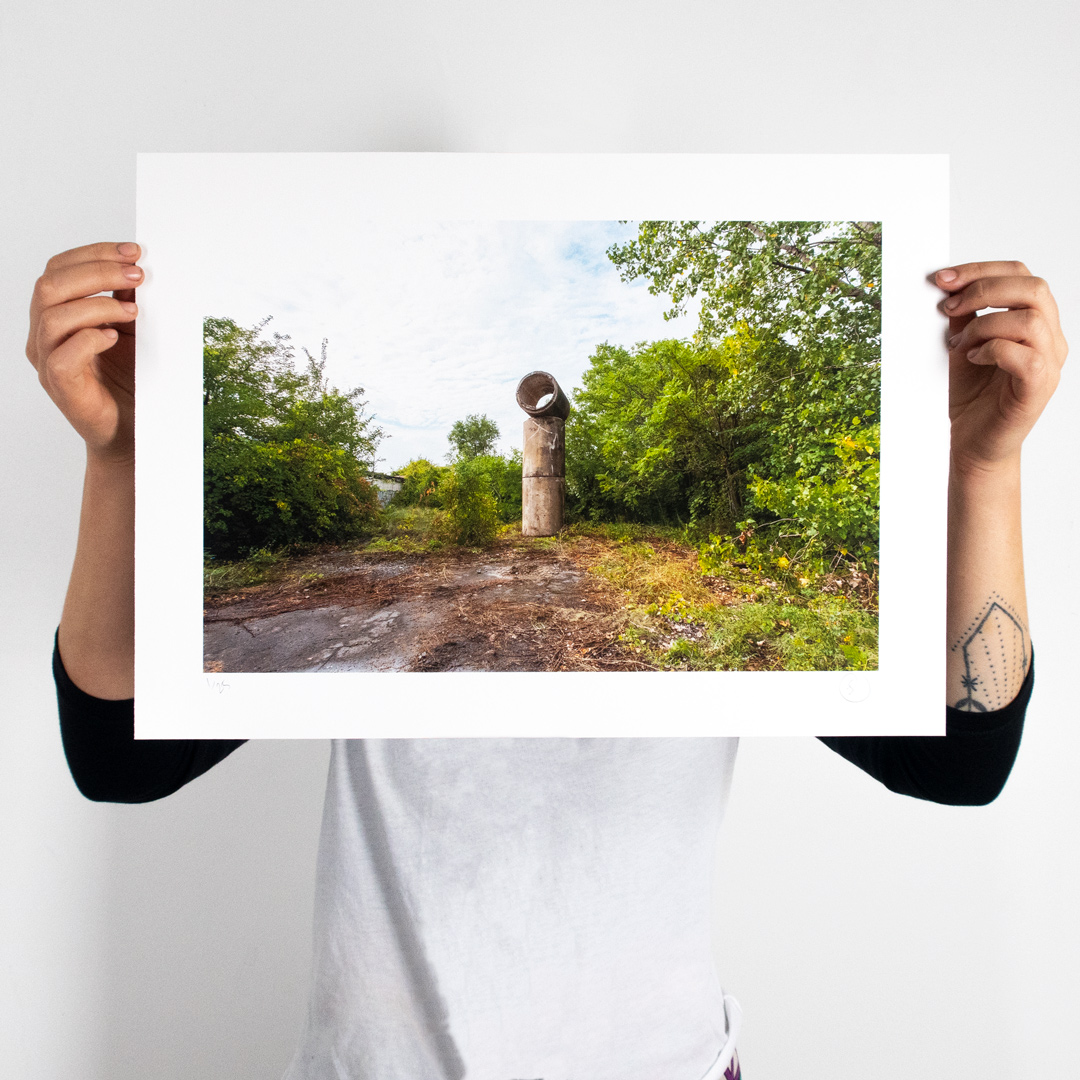 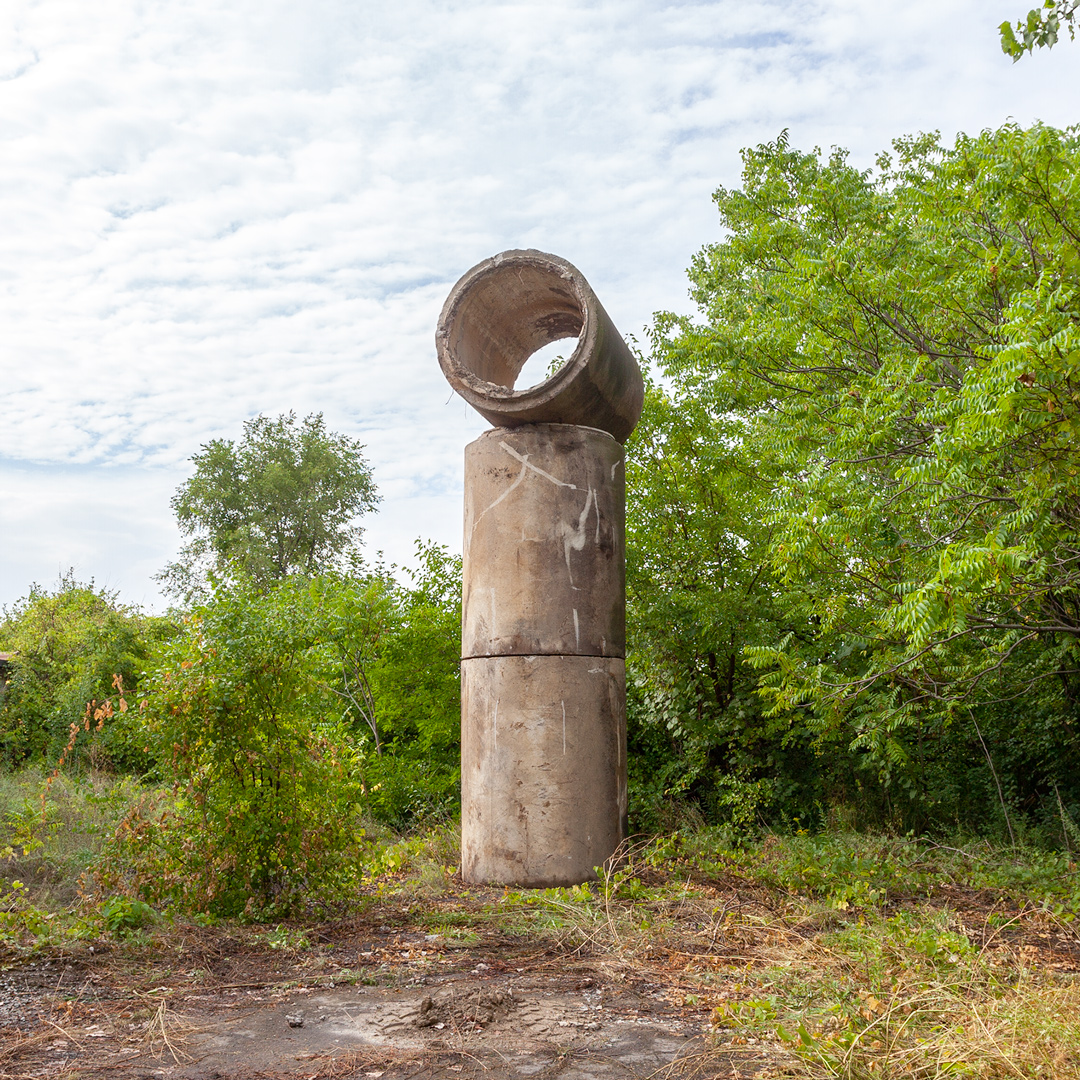 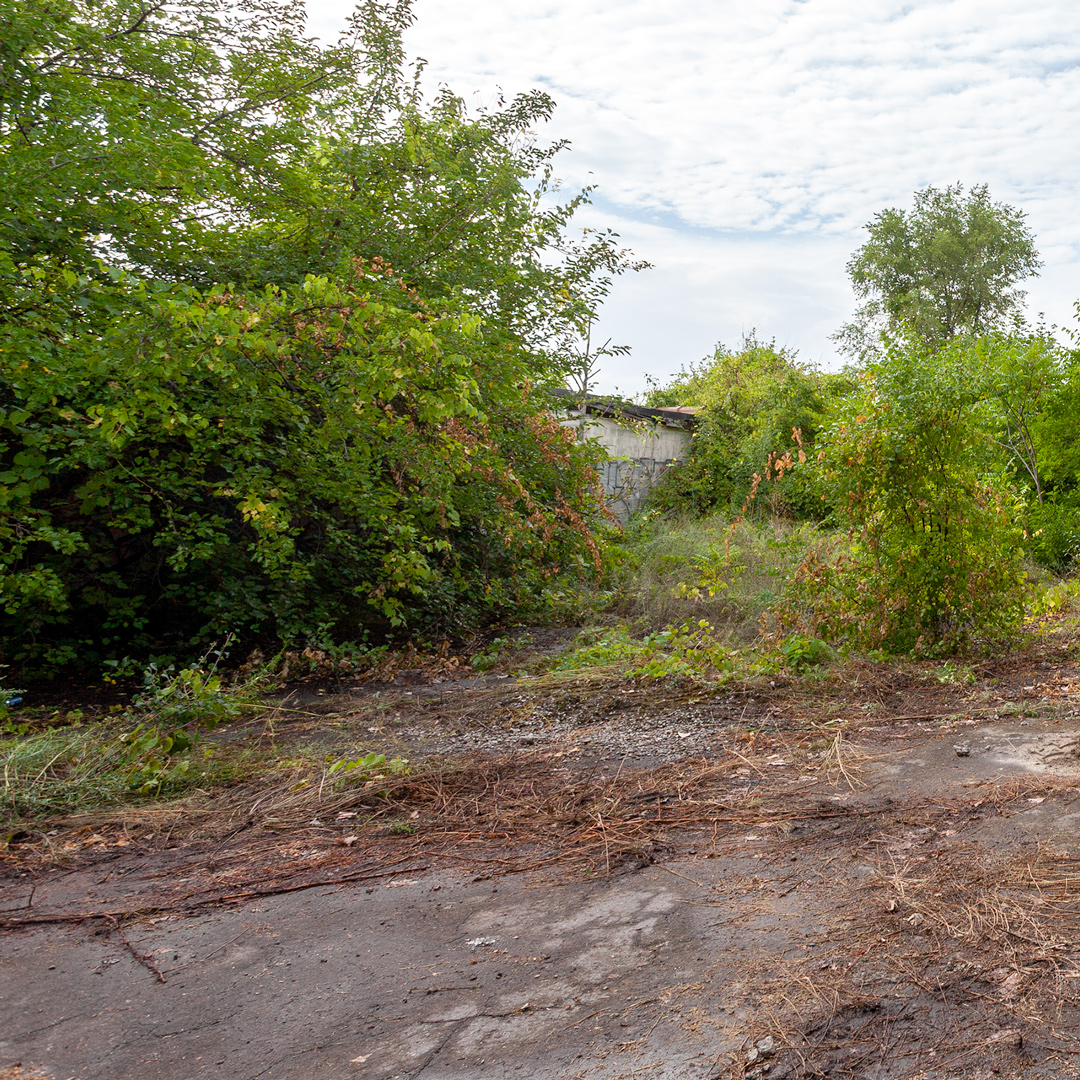 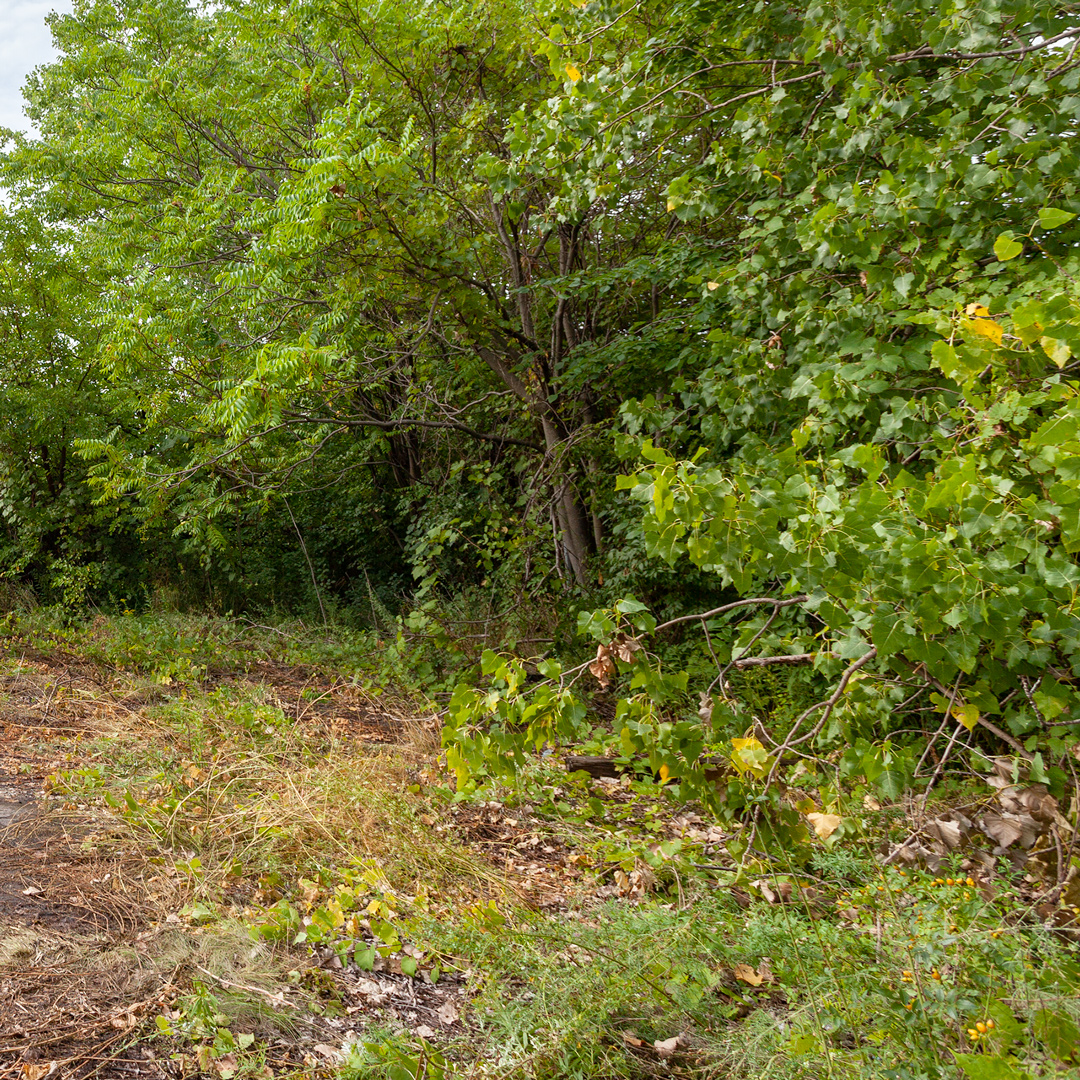 ABOUT THIS ART:
Scott Hocking's Seventeen Shitty Mountains editions are presented in partnership with David Klein Gallery.
Read our full interview with Scott Hocking and check out the Seventeen Shitty Mountains video at News.1xRUN.com...
"Seventeen Shitty Mountains consists of 17 individual sculptures, constructed from discarded concrete materials found onsite. 8 of the sculptures are large towers, built from concrete sewer pipes that weigh approximately 10,000 lbs each (5 tons), sized approx. 8 ft long x 6 ft diameter each  3 of these large towers are approximately 22 ft high, built from 3 of the 10,000 lb concrete pipes, and therefore weigh approximately 30,000 lbs each (15 tons) the 5 other large towers are built of 2 or 3 large concrete pipes and are approx. 14 ft tall, and range from 15,000 lbs (7.5 tons) to 30,000 lbs (15 tons)
the 9 other sculptures are part of what I call Shitty Stonehenge, aka Hermaphrohenge, aka Scotthenge, and make up an arc of columns / towers clustered together onsite.
All of the materials used in the installation are arranged and stacked cast-concrete sewer pipes of various sizes and diameters, as well as other cast-concrete slabs, chunks, and fragments.
Seventeen Shitty Mountains came about when Jesse and Roula from 1xRun invited me to participate in the Murals in the Market festival.  Knowing I work site-specifically, using whatever materials I find, Jesse and I explored potential sites around Eastern Market.  The former Water and Sewerage building and adjacent vacant lots between Orleans and Riopelle Streets, were immediately intriguing because they are some of the last vacant properties in Eastern Market. For me, a site has to be visually appealing, but also has to have materials I can use.  When we found various concrete pipes lined up in different sections of the vacant lots adjacent to the building, I knew this was the material I could use.  There were 20 large concrete sewer pipes, and dozens of other smaller pipes and concrete fragments scattered throughout the area.  This was good enough material and context for me to make a site-specific installation.

The title Seventeen Shitty Mountains is a play on the site-specific sculptural installation Seven Magic Mountains by Ugo Rondinone, built out of large, stacked boulders in the Nevada desert, and painted various vibrant Day-Glo colors.  This work is very photogenic and “selfie” friendly.  In my work, using discarded and decaying concrete sewer pipes – literally “shit pipes” – I decided to make a megalithic installation that at once parodies the Seven Magic Mountains work, and also riffs on the ancient megaliths and henges of the UK, ancient Roman or Greek ruins, and other prehistoric sites such as the Moa of Easter Island.  A contemporary mysterious artifact and/or ceremonial site of unknown origin that people can stumble upon and discover – perhaps while buying their fruits and vegetables at the market.  Playing with ideas of ceremony, ritual, and contrasting ancient mythologies and mysticism with our everyday life are central themes to my artworks.  I like that people will be driving by and notice something strange, leading to further investigation.  The sewer pipes seem utilitarian in some way, and I think that confuses people who discover them.  If people say to themselves “wait, what the fuck is that?” I’m happy.  The work is also sub-titled Shitty Sun Tunnels, after another famous desert-southwest land-art work called Sun Tunnels, by Nancy Holt.  Again, playing with themes of these previous, famous works, I’m interested and making a Detroit-centric version, using wasted materials, and a neglected space.

Physically, I build large-scale site-specific installations like this almost as if they’re a large 3D sketch.  Placement of the works and their overall arrangement was determined as I worked.  The short 1-week timespan helps me make quick decisions and trust that I will figure it all out as I go.  An important tenant in my work is a belief in chance, and that things go as they are supposed to go.  Often, I work in sites that are not mine, I’m trespassing and I do not own the materials I use, and this circumstance has led me to consistently practice letting go of any control of the fate and transitions of the physical works.  Instead, I focus on the practice itself, from the conceptual aspects behind the ideas, to meditative qualities of work onsite, often alone, with only the sounds of nature surrounding me.  In the end, like most site-specific installations I create, the work will be destroyed, altered, or eliminated in some way.  But the photographic series’ created from the three dimensional works lives on, often the only evidence that the site-specific artworks ever existed." - Scott Hocking
MORE
ABOUT Scott Hocking:
Scott Hocking was born in Redford Township, Michigan in 1975. He has lived and worked in Detroit proper since 1996. He creates site-specific installations, sculptures and photography projects, often using found materials and neglected locations. Inspired by subjects ranging from ancient mythologies to current events, his artworks focus on transformation, ephemerality, chance, and the cycles of nature. He is left-handed and wears contact lenses. He has a speech impediment and was once hypnotized in an effort to correct this. He is a Pisces, born on the day of creative isolation, in the week of the loner, and the year of the cat. A psychic once told him he would have an average life and die at 88. He does not know how to roller-skate, ice skate, ski, or drive a stick shift. He is a percussionist and can play the glockenspiel part in Jupiter from Holst's Planets suite. He can read palms. He grew up on a dirt road, near a railroad track, with a dog named Bubba, who sometimes slept on the kitchen table. In elementary school, a visiting barnyard turkey took a shit on his head. At 19, he lived in a Toyota Corolla for 4 months. At 27, he lived in a French chateau for 2 months. He has 3 tattoos. He is a 6 of spades. He is the number 11. He has been to 42 states. He once hiked the Death Valley dunes on a 117°F day, which led to a lesson from the sheriff, who said: “Son, people die in the desert.” He’s been stalked by a New Mexican mountain lion. He’s slept on a Toronto billboard. He’s eaten reindeer in Akureyri, deep-fried honeybees in Shanghai, kangaroo in Cambewarra, and grasshoppers in Oaxaca. His spirit animals are the dog, which walks on his left, and the crow, which flies on his right. His childhood nickname was Scooter. He’s a 6th generation Detroiter, descended from Baltic Polish immigrants and a long line of Cornish copper miners who settled in Michigan’s Upper Peninsula. Two dogs have bitten him in his life: Once on the right calf Once above the right eye. His favorite films are Le Samourai and The Road Warrior. He has been arrested 6 times, and accumulated more traffic tickets than anyone you know. His artwork has been exhibited internationally, including the Van Abbemuseum, the Kunst-Werke Institute, Kunsthalle Wien, and the French Triennial Lille 3000: Renaissance, and nationally at the Museum of Contemporary Art Chicago, the Smart Museum of Art, the School of the Art Institute Chicago, Contemporary Art Museum St. Louis, the Pennsylvania Academy of Fine Arts Museum, The Mattress Factory Art Museum, the Detroit Institute of Arts, Cranbrook Art Museum, the Museum of Contemporary Art Detroit, the Eli and Edythe Broad Museum at MSU, and the University of Michigan Institute For The Humanities. He has received multiple awards, including a Kresge Artist Fellowship, a Knight Foundation Arts Challenge Grant, and an Efroymson Contemporary Arts Fellowship, as well as residential grants in France, Iceland, Australia, Canada, Brazil, and throughout the United States. He is represented by David Klein Gallery, Detroit. 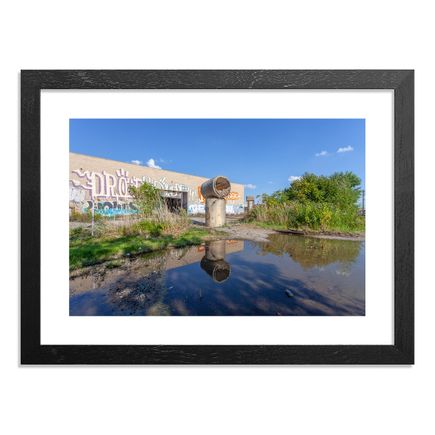