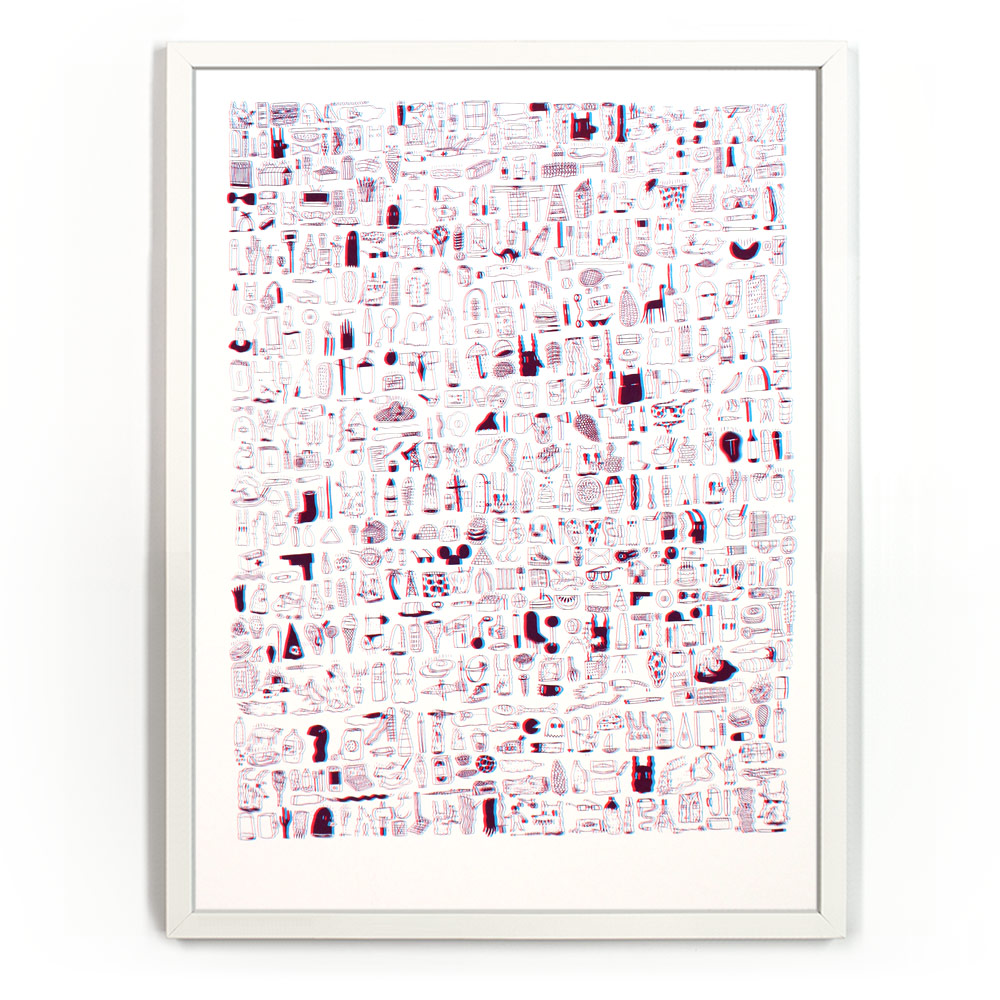 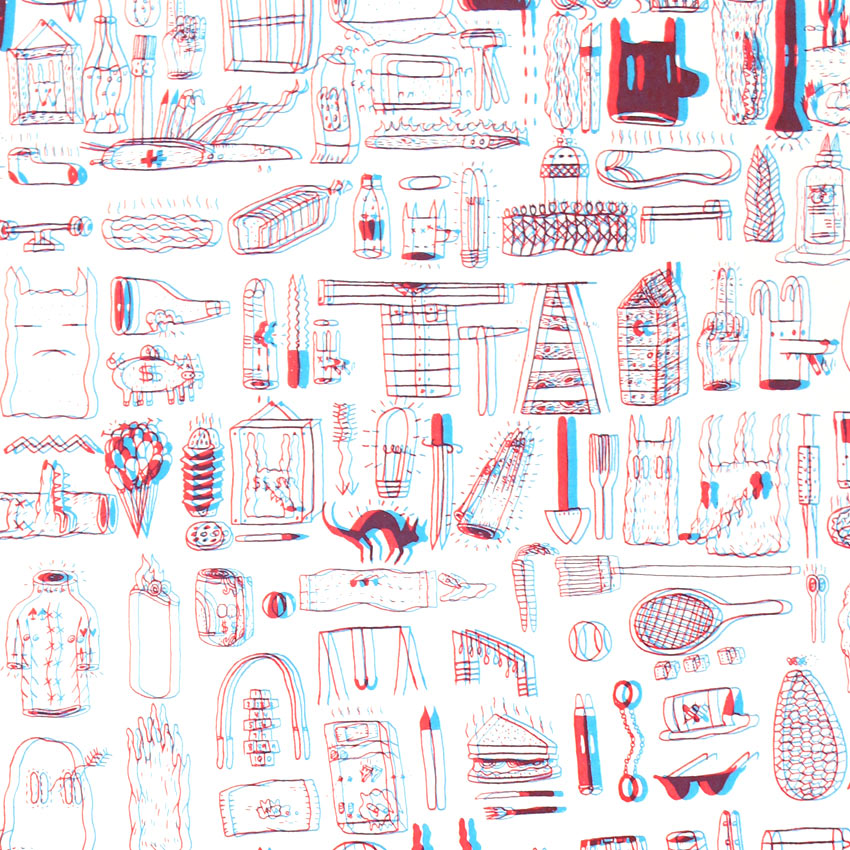 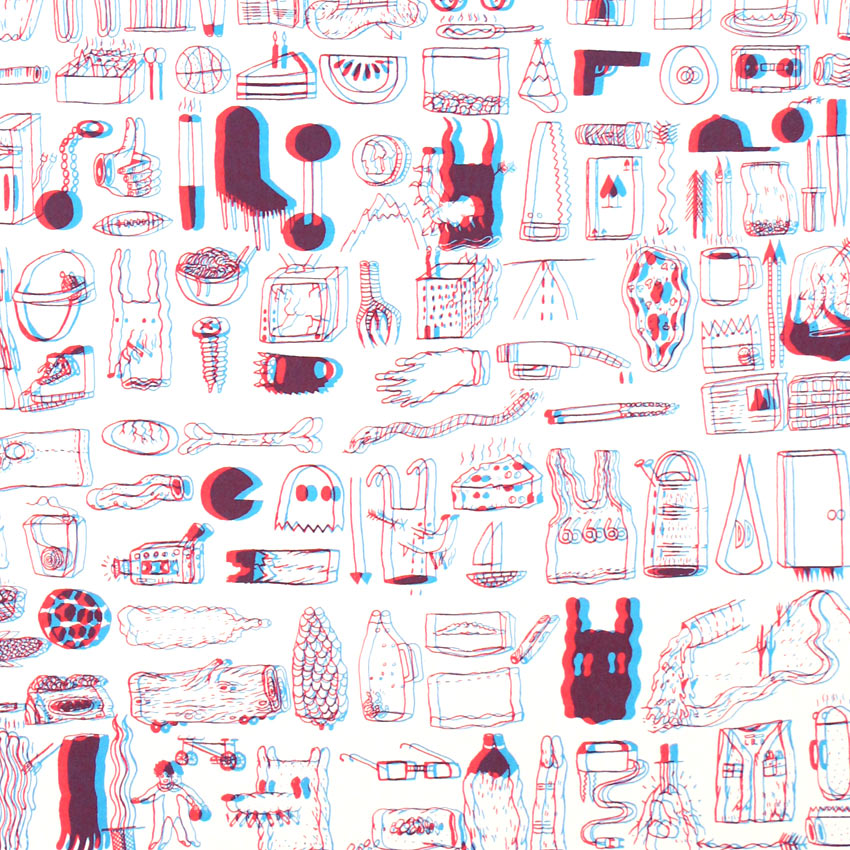 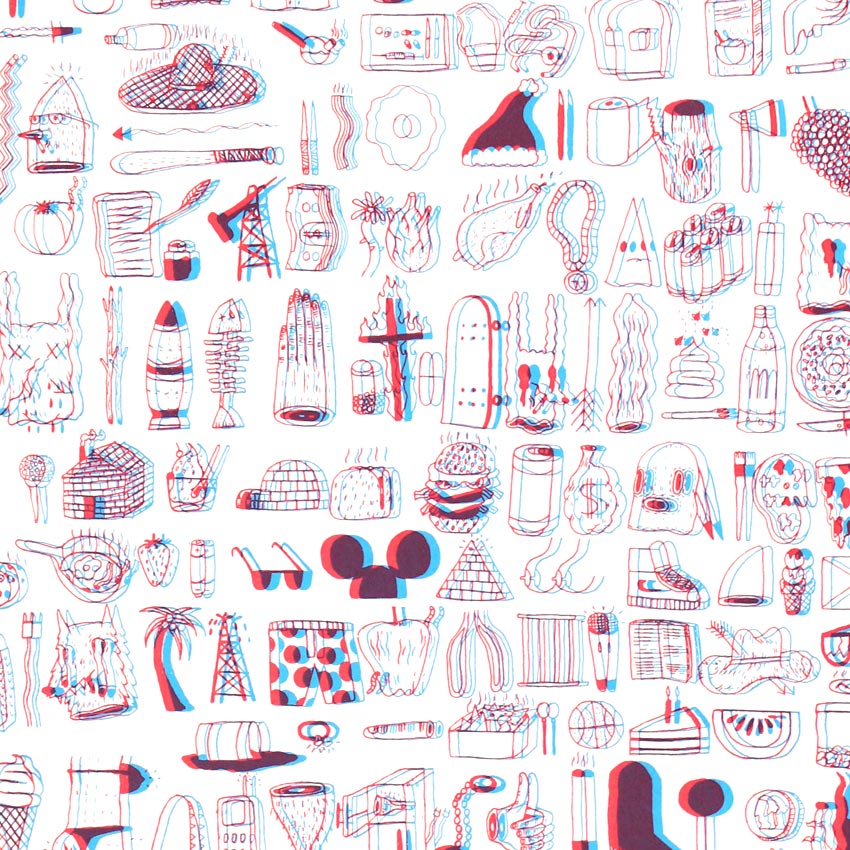 ABOUT THIS ART:
Note: This RUN is only available unframed.

"This piece is an anaglyph hand drawing of a series of symbols. They may be interpreted as contemporary symbols, or something modern, but to me they are just an extension of my strange thought process. It is just one in a larger series of the same theme. I guess you could say it fits into a particular body of work I’ve been working on for awhile. If I had to explain it in terms of art history, I would say I used the paper as if it was a cave and this piece is one of my cave paintings. Maybe it’s a commentary on American culture, non-American culture, funny strange narratives I made up. It’s just a piece of paper with a bunch of small pictures on it. It’s 3-D as well.

I usually don’t do silkscreen prints with other people, that is, I usually don’t do print work outside of the weird stuff I do with close friends of mine. But with this opportunity I said to myself, “I want to enter the 3rd dimension.” I think I achieved that. It’s an old process…the red and blue 3-D left-right eye effect. When I first saw a blue and red 3-D movie in the 80’s as a child I was in utter shock. I thought it was magic. I guess I wanted to make a magical print." - Spencer Keeton Cunningham

This RUN is signed, numbered and comes with a Certificate of Authenticity from Spencer Keeton Cunningham and 1xRUN.

MORE
ABOUT Spencer Keeton Cunningham:
“The most amusing work at "N.D.N.: Native Diaspora Now" is Spencer Keeton Cunningham's Chief Ramen Heart, which incorporates acrylic and spray paints, a pack of American Spirits, and, yes, ramen noodles to portray a cartoonish Native American. X-ray style, we see the figure has a hamburger in his brain, cigarettes by his throat, and ramen over his heart. With his spindly (almost monstrous) fingers, he appears to be plucking a black arrow that has pierced his head and the burger. It's gross and amusing. Cunningham and Castaneda are members of the Indigenous Arts Coalition, a Bay Area organization started in 2008 that advocates for Native American artists…" – Jonathan Curiel SF Weekly, August 29 2012

"Spencer Keeton Cunningham’s work is especially provocative. His work is at times frightening,images on the destruction of American Indian culture. It is like the art version of a Sherman Alexie poem, scathing and upsetting, but somehow with hope and a sense of humor. It’s impossible to capture the power of Cunningham’s stuff with one picture. The installations as a whole are what does it." -America Singing

“The scale and color density of artist Spencer Keeton Cunningham‘s work makes it almost impossible to ignore—but it’s the poignant, painful subject matter that makes his work difficult to forget. By pushing around the overly romanticized notion of North American Indian culture as a series of icons--Cunningham is able to speak to the viewer through short, graphic strokes that hit hard. He’s interested in presenting his own take on the demonization of tribal people in American culture.” - Beautiful Decay Magazine 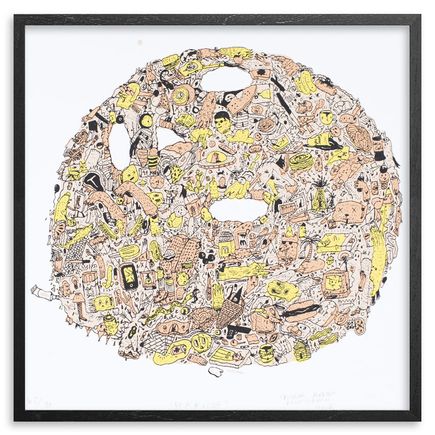 Spencer Keeton Cunningham
Symbolos
Run of 1
ARCHIVED
This run is not on sale. Check the product page for more info.
Favorite Spencer Keeton Cunningham
Tomahawk Flathead
Run of 1
ARCHIVED
This run is not on sale. Check the product page for more info.
Favorite 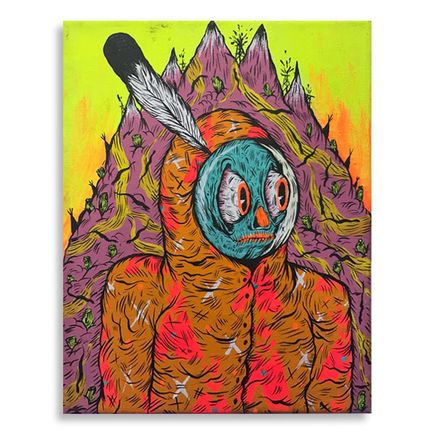 Spencer Keeton Cunningham
2084
Run of 1
ARCHIVED
This run is not on sale. Check the product page for more info.
Favorite Spencer Keeton Cunningham
Oil Fangs
Run of 1
ARCHIVED
This run is not on sale. Check the product page for more info.
Favorite Spencer Keeton Cunningham
Green Dog With Arrows
Run of 1
ARCHIVED
This run is not on sale. Check the product page for more info.
Favorite