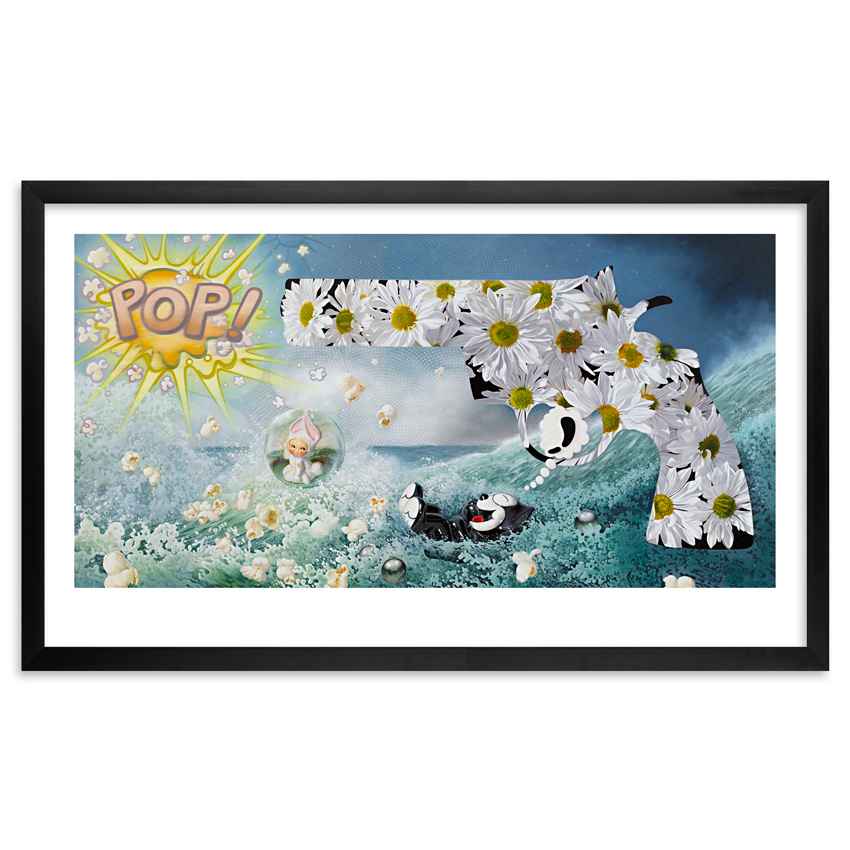 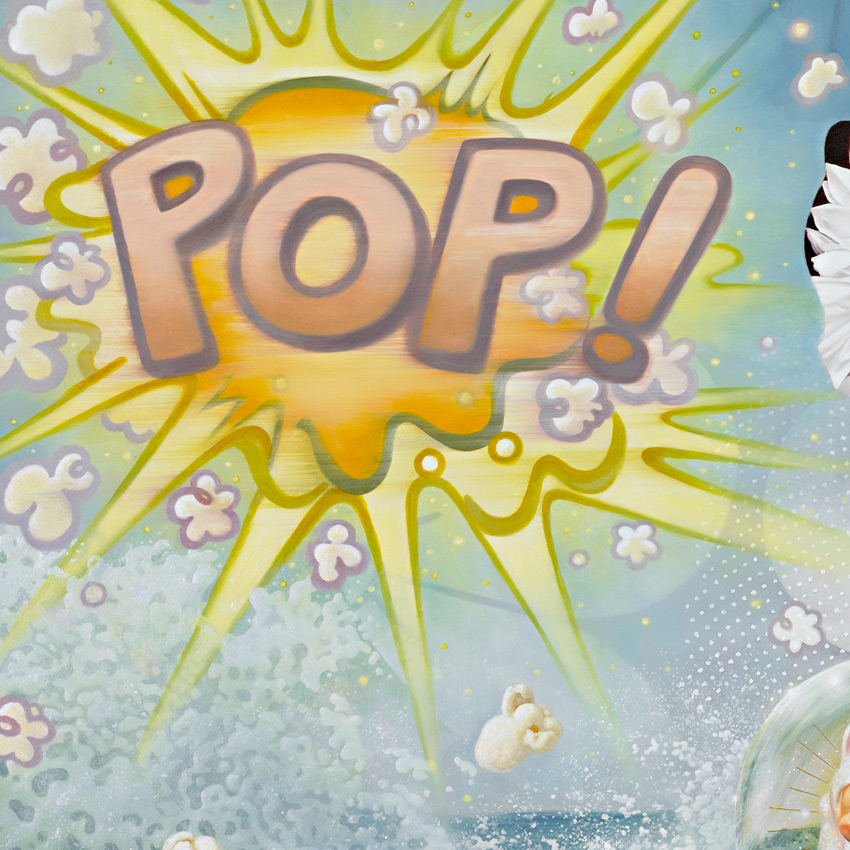 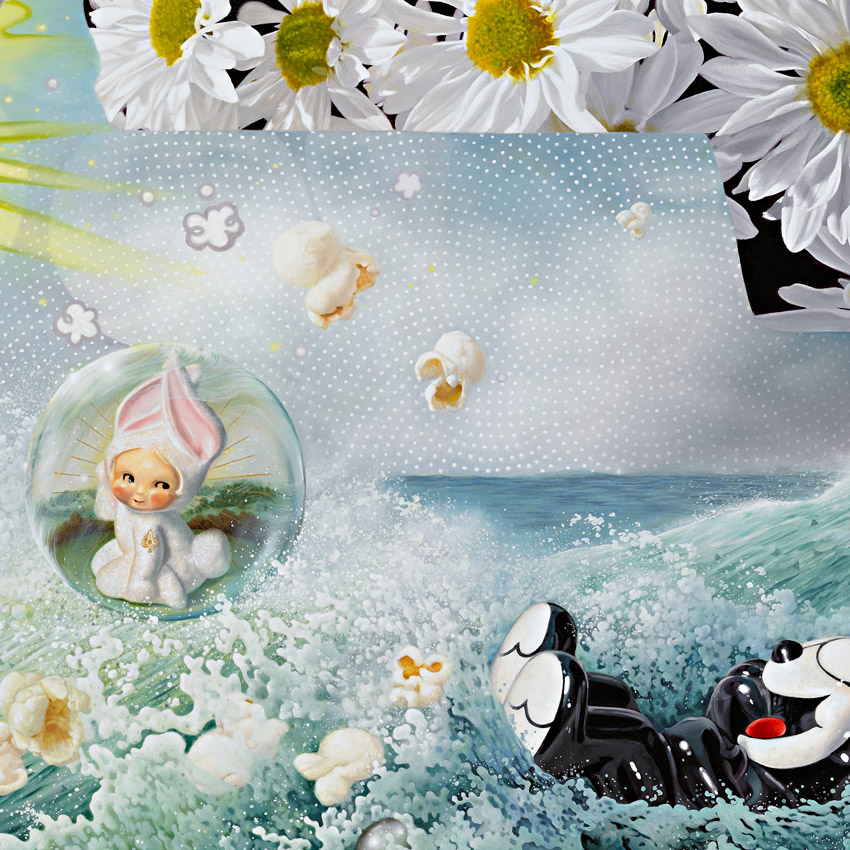 
"The Big Bang was painted with oil on wood and is a continuation of a totally new direction for me.

This painting is a visual reminder of hippies placing daisies down the barrels of guns and is inspired by the growing war fatigue our nation has experienced. I consider Felix one of our first silent film stars. There are many layers of meaning and binary oppositions in this painting. Normally when working on a piece I start with a general thumbnail of my concept. Then the painting becomes itself over time as I work, so there are many changes. This is why the work takes much longer than if I had started with a tight drawing and color sketch, but it’s a process I enjoy, it’s a playful journey and ends up with a lot of depth." - Stephanie Henderson

This RUN comes signed, numbered and with a Certificate of Authenticity from Stephanie Henderson and 1xRUN.

MORE
ABOUT Stephanie Henderson:
Stephanie Henderson has worked in the fine art world for over 30 years and has received numerous awards and honors. She has exhibited her paintings in museums and galleries nationally and internationally, as well as locally in the Detroit area. She received her formal education at the College for Creative Studies and Wayne State University, where she earned her MFA degree. Her most recent work is a continuing thread begun with her contemporary vanitas paintings. The binary oppositions used in her paintings address the values of our culture as well as abstract concepts of time and space. The meticulous glazing technique employed gives the paintings a vivid sense of realism. Lately she has been combining illusionist techniques with the flattening of the picture plane. She has become increasingly interested in using pattern as a formal element.

Her work has appeared in many publications such as dream journals by Marcel Schurman, cards by Bottman Design, books such as Claus Brusen’s Imaginaire series, Marcel Salome’s Dreamscapes, Faye Dowling’s curation The Book of Skulls, and magazines such as Charles Hively’s Creative Quarterly. She has been interviewed by Didi Ferri of XLegion and Kendrick Daye of Art Nouveau and has been featured online in sites such as beinart.org, Hi-Fructose, Juxtapoz, Platinum Cheese, Who Killed Bambi, Artist a Day, Empty Kingdom and Creep Machine.

MORE
MORE FROM Stephanie Henderson
Run of 1
ARCHIVED
This run is not on sale. Check the product page for more info.
Favorite 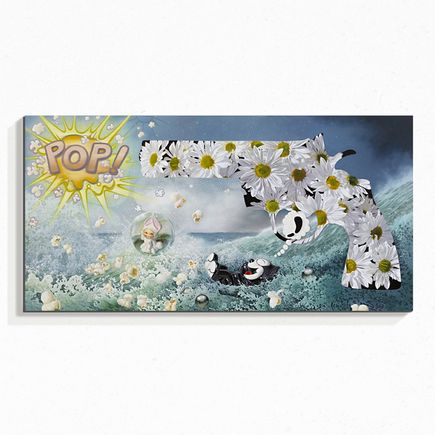 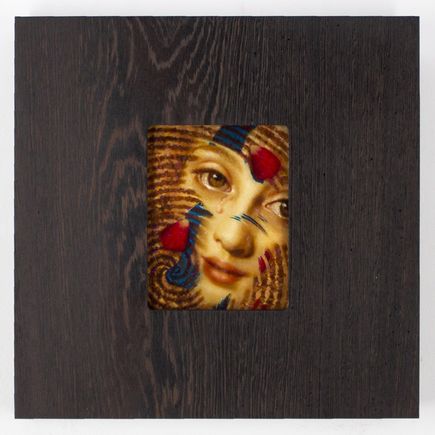