SOLD OUT
Favorite
IN THIS COLLECTION:
Action Shotz
38 Artworks0 Available 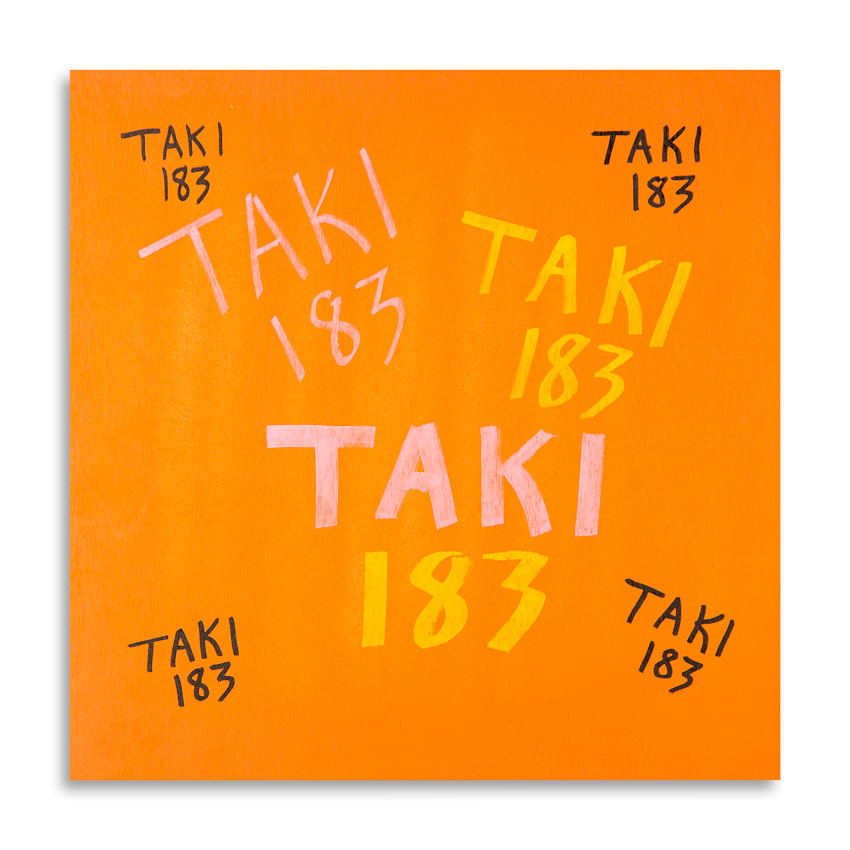 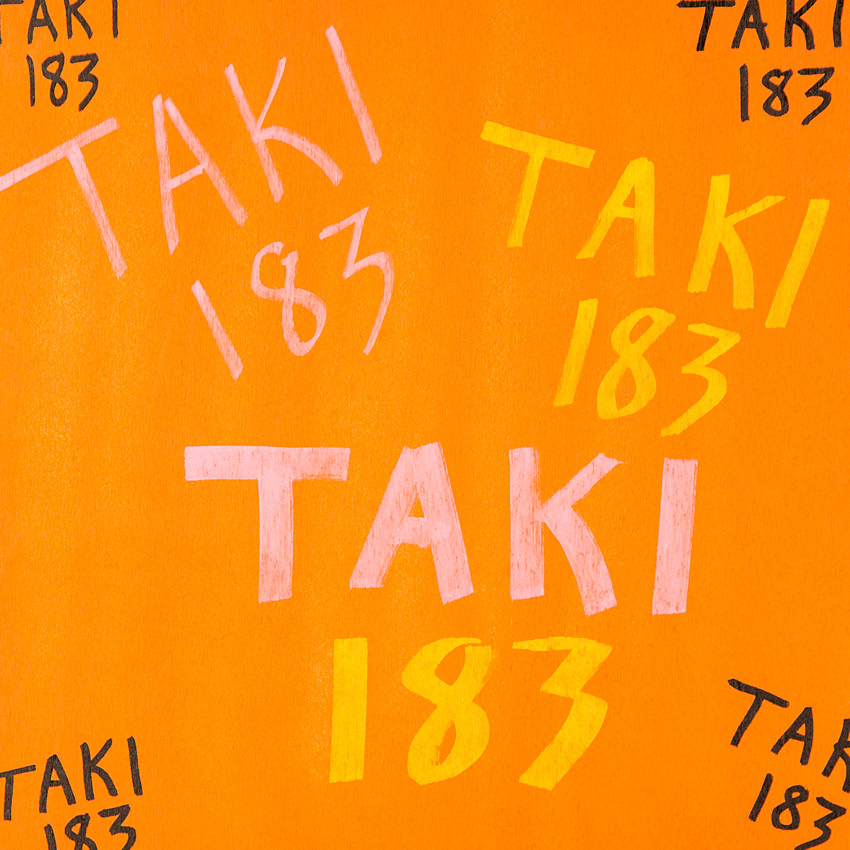 “The goal of this exhibition is to show that no matter what generation an artist identifies with, the goal is always to be creative, influential and fresh, proving that New York graffiti in its purest form is timeless,” curator JEE of Kingz Destroy Production said from his studio space in New York.


ABOUT THE ARTIST:
Graffiti writers around the world know the name that started it all: TAKI 183. A kid from 183rd Street in Washington Heights in northern Manhattan, TAKI's simple signature captured the attention of a reporter and, in the summer of 1971, an article appeared in The New York Times. TAKI was the first New Yorker to become famous for writing graffiti. The floodgates opened.

Find more from TAKI 183 at www.taki183.net
MORE
ABOUT Taki 183:
Graffiti writers around the world know the name that started it all: TAKI 183. A kid from 183rd Street in Washington Heights in northern Manhattan, TAKI's simple signature captured the attention of a reporter and, in the summer of 1971, an article appeared in The New York Times. TAKI was the first New Yorker to become famous for writing graffiti. The floodgates opened.

In the summer of 1969, Demetrius was bored. He lived uptown, north of Harlem, in a neighborhood full of Greek kids, like himself, and also a growing population of Cubans, Dominicans and Puerto Ricans. The Savage Nomads gang was headquartered a block away, but they didn't bother the locals. One afternoon that summer, Demetrius' friend Phil wandered down to 183rd and had some news for Demetrius and his friend Greg. A kid in Inwood, 20 blocks north, was writing his name and street number: JULIO 204. Demetrius and Greg thought that was pretty cool. They all started to write their names. Demetrius wrote 'TAKI,' a diminutive for a number of Greek names, and his street number.

In the fall of 1970, TAKI went to high school in Midtown Manhattan, taking the 1 train down and back. Along the way, he wrote TAKI 183 on the subway stations and anywhere else he thought was a good spot. He had seen the election posters and stickers plastered around the city in 1968, and again in 1970, and emulated their campaign tactics.

When he started working as a delivery boy in midtown, running packages of high-end cosmetics to fancy places like the Upper East Side, he held the box up against light poles, using it as cover while he wrote his name.

It was probably one of these tags on the Upper East Side that caught the eye of the New York Times reporter, who tracked TAKI down near his home. On July 21, 1971, TAKI's fate was sealed: "TAKI 183 Spawns Pen Pals," read the headline of the Times article. Just like that, TAKI 183 became the father of contemporary graffiti. His legend grew, and rumors spread that TAKI even tagged a Secret Service car and the Statue of Liberty.

Over the next five years, graffiti exploded to the point where it became a colorful, stylish mural-sized art form. TAKI had no interest in that. He was done with graffiti and had moved on to being a sensible grown-up. He went to college and learned car repair and bodywork. He raised a family. And amid all the flurry of nearly 40 years of graffiti around the world, he has kept silent.
MORE
MORE FROM Taki 183
SOLD OUT
Run of 1
Favorite 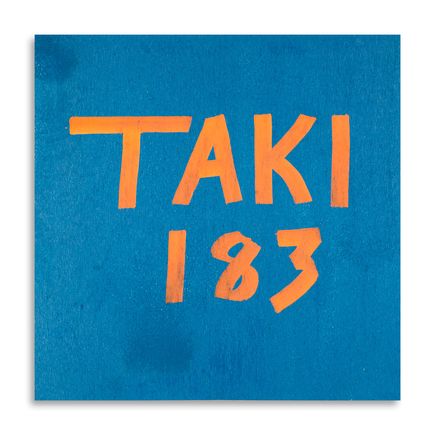 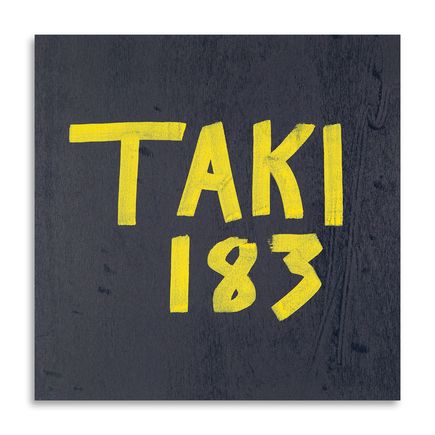 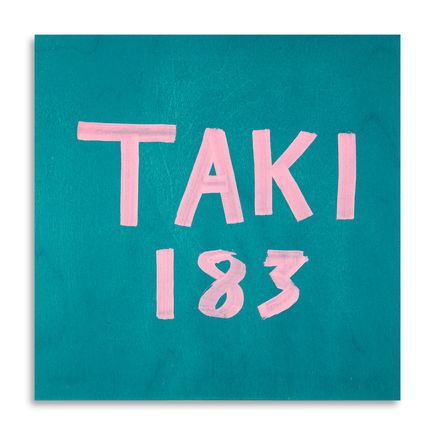 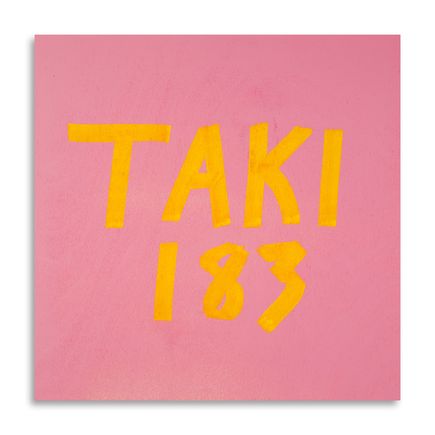 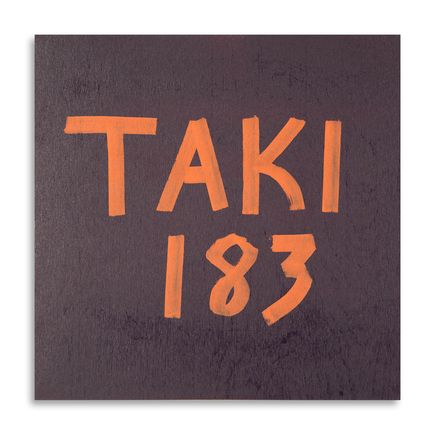 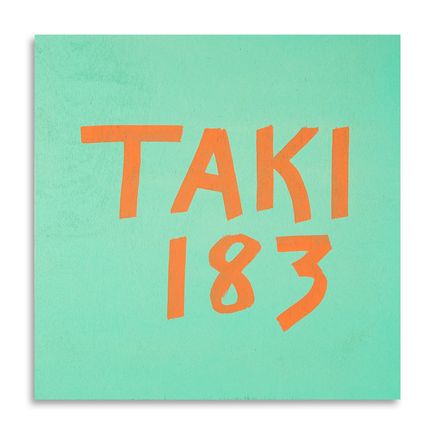