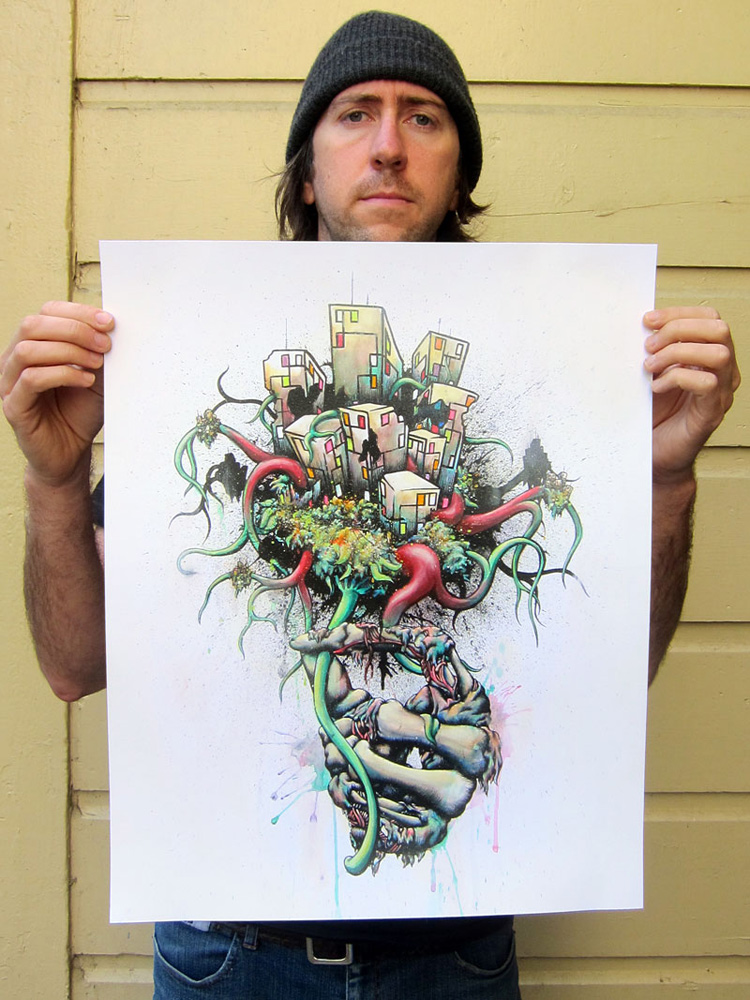 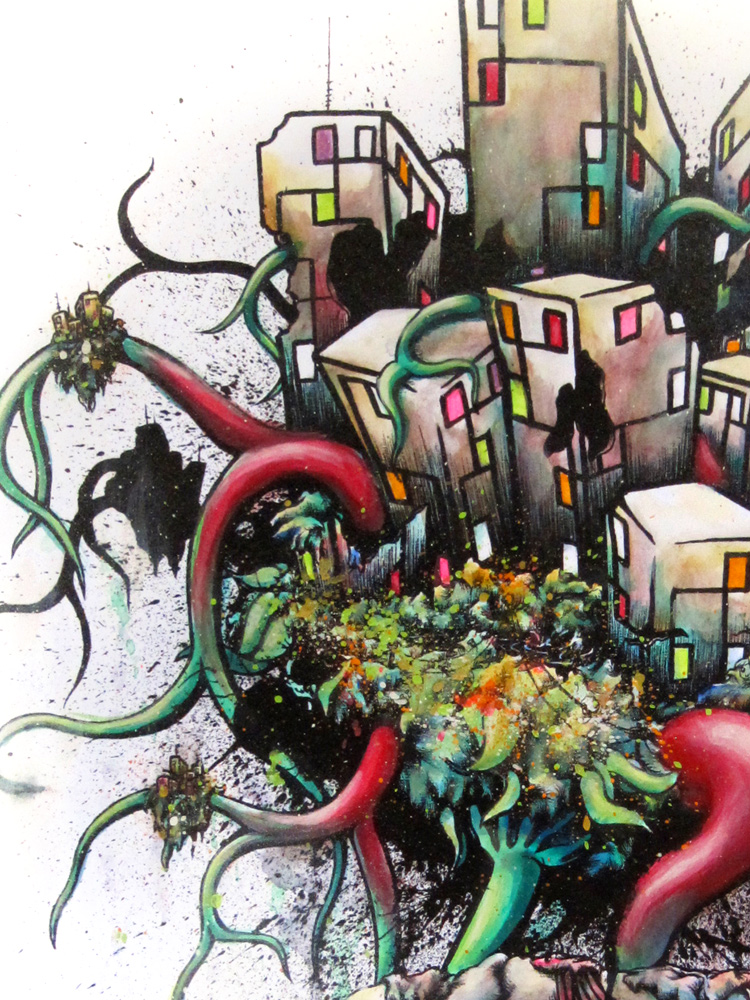 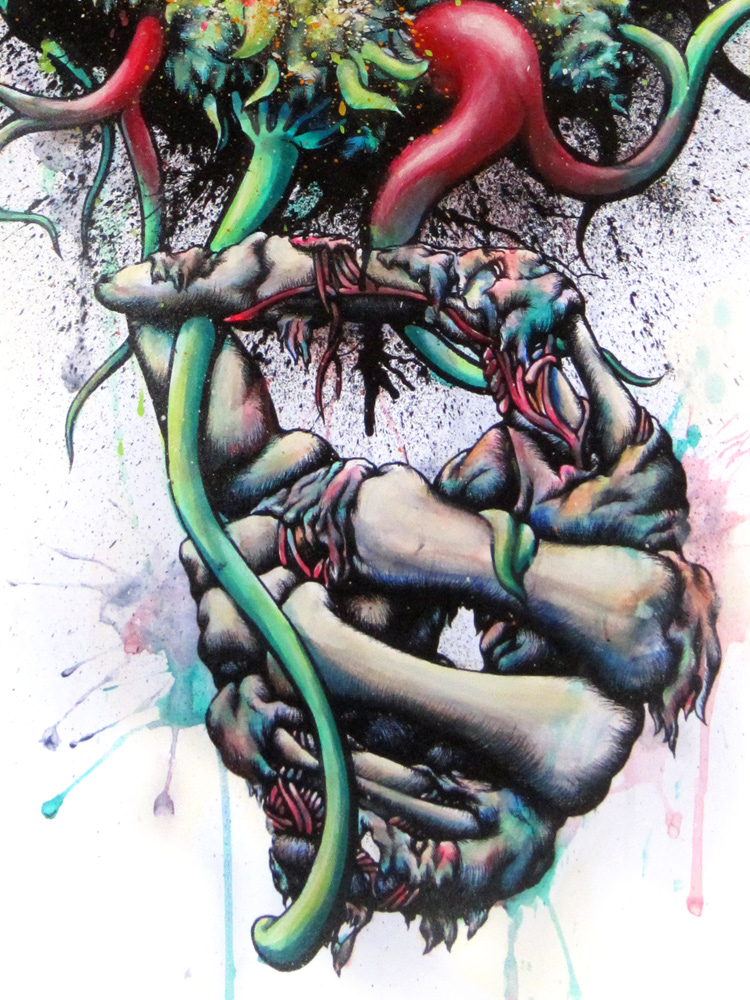 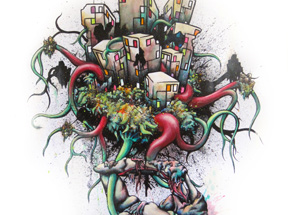 IN THIS COLLECTION
Would You Like The Good News
Or The Bad News First?
4 Artworks
Don't miss the next Daryll Peirce release!
Subscribe to our newsletter and be the first to know about new product releases. You will also receive:

The framing option for this RUN includes a 2 Inch Black Frame with Archival Foamcore Backing, UV-Glass and Ready To Hang Hardware

Please Note: Each one of these prints will be printed with only the black outline and will then uniquely hand-embellished by Daryll Peirce. The photo shown here is just an example, each piece will be entirely unique.


"I often work in multiple pieces and diptychs to tell a story and emphasize the alternate sides of certain subjects. I had originally created individual pieces, one with a left hand and the other right hand each holding a flowering structure. The right hand holds one colonized flowering micro-environment cluster of living thriving vitality and the other of apathy, negligence, and wilting death. I suppose they're rooted in our inherent connection to our natural and self-made environments and our role as self-aware and bipolar beings with the power to sustain or destroy ourselves consciously. More literally, we are always faced with choices and in one hand you may hold an improved future and in the other our destruction. I've also struggled with personal self-destructive issues as well which is a constant choice we all face to various degrees. I think the highlights are the meticulous linework, the overall impact from afar and subtle skull image within the building shapes as well as the detailed areas to be examined and discovered when viewing up close. Also, all the color you see here is hand painted. I started each piece with the black and white print and take each one in a varied direction of color and exploration, so they are truly unique and individually interesting." - Daryll Peirce

This RUN comes signed, numbered and with a Certificate of Authenticity from Daryll Peirce and 1xRUN.


Read on below for the Full 1xRUN Thru Interview with Daryll Peirce. 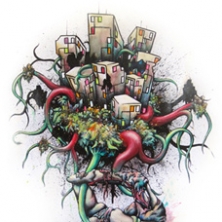 Daryll Peirce
San Francisco, California
To follow Daryll Peirce you must be a member.
Already a member? Log In
SIGN UP
FOLLOW
"Within humanity and the individual mind stirs threads of connectivity including a desire to control our social systems, habitat, future and fears. Opposing that is the ego and the unrelenting internal struggle that obstructs progression. Through art I am free to pendulate between absolutes that define us such as optimism and pessimism, boldness and obscurity, pragmatism and spirituality, creation and destruction. I'm metaphorically exploring these interwoven polarities using the human figure, arterial botanic city-like organisms, fractal growth, bandages, volatile energy clusters and a host of ever-growing imagery. Socially, my lens has always been focused on outcasts and outsiders and I enjoy taking grotesque liberties with the human form to express their vulnerabilities. My hope is to provoke an internal exploration of the dualities within as well as those of our general human nature. " - Daryll Peirce

Focused on exploring the connectivity within humanity and its claims of control over social systems, habitat, nature, and future, Peirce's artwork pendulates between absolutes–such as optimistic or pessimistic, satiric or esoteric, pragmatic or spiritual, and bold or poetic. Grotesquely exaggerated human forms, arterial-botanic city organisms, and flowering interconnected urban clusters currently inhabit his psyche and spew into his work. On a more intimate level, his influences instinctively stem from past and current environs, travel, exploration, skateboarding, surfing, day-dreaming, philosophy, and interacting with all forms of the human animal with a focused lens on the social outcast.

Daryll was born in Reno, Nevada in 1978 and received his BFA from the Rocky Mountain College of Art & Design in 2000. He has since worked incessantly as a painter, designer, illustrator, occasional curator, and creative. His work has been hosted in multiple national and international exhibitions and galleries as well as on external public walls. His work has been in publications such as IdN, The New York Times, Blackbook, Print, Juxtapoz, various city papers and online at The Huffington Post, Wooster Collective, Slam Hype, Fecal Face, Hi-Fructose, Scene360, No New Enemies, Coolhunting, and Modart. Although he moves and travels often he considers San Francisco, California home. 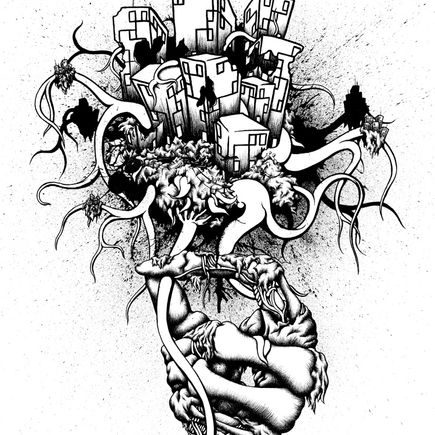 ARCHIVED ITEM
This product is archived in our warehouse. It is not currently on sale, but could come back at any time.
ORIGINAL ART
36 x 50 x 1.5 Inches
Acrylic + Stain on Birch Panel 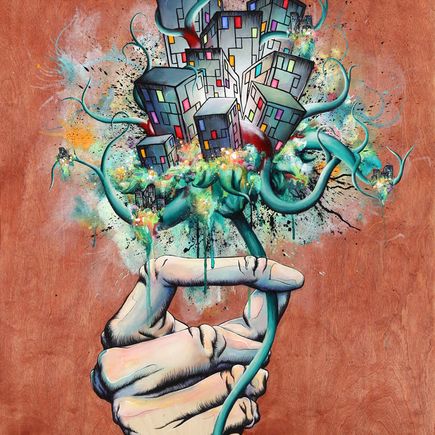 Daryll Peirce
Original Painting - Would You Like The Good News
ARCHIVED

ARCHIVED ITEM
This product is archived in our warehouse. It is not currently on sale, but could come back at any time.
ORIGINAL ART
36 x 50 x 1.5 Inches
Acrylic + Stain on Birch Panel 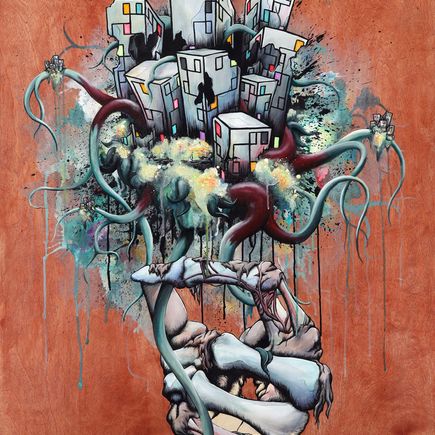 ARCHIVED ITEM
This product is archived in our warehouse. It is not currently on sale, but could come back at any time.
CLOSE
FILTER
APPLY
Type
-
Price
-
Availability
-
Availability
-
Country
Availability
SHARE & EARN CREDITS
Share this unique link anywhere and get an account credit!