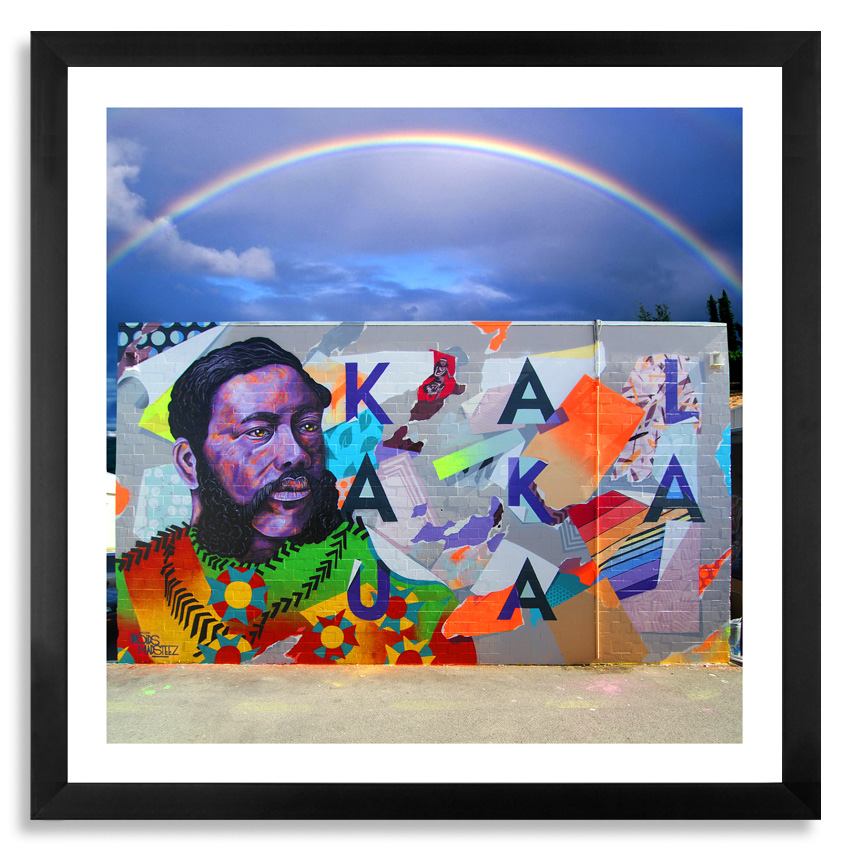 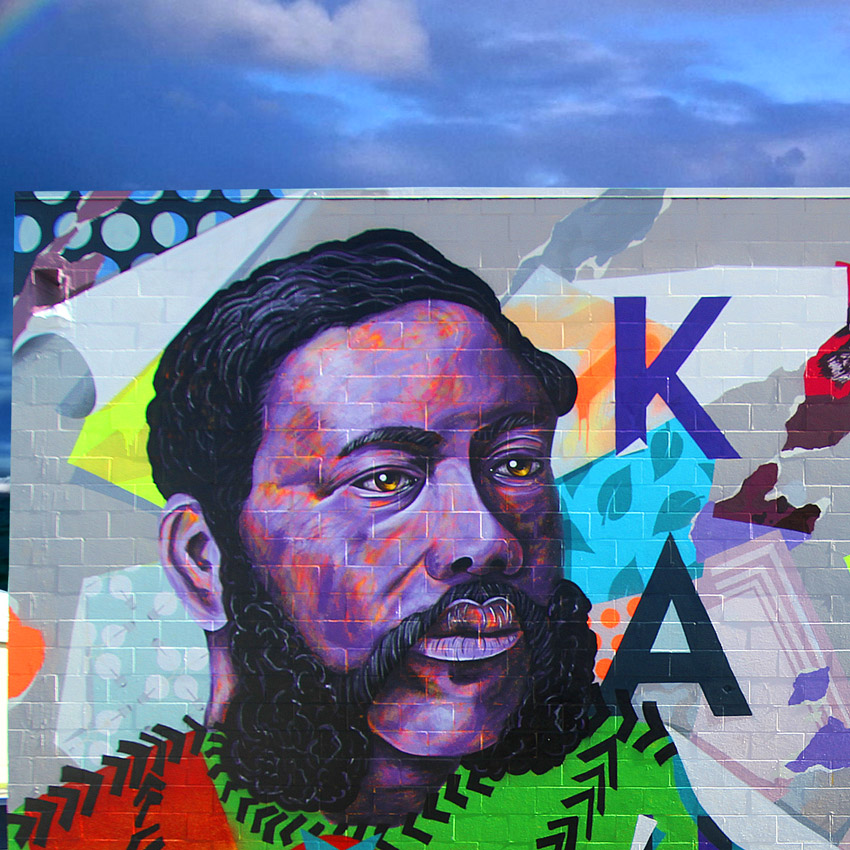 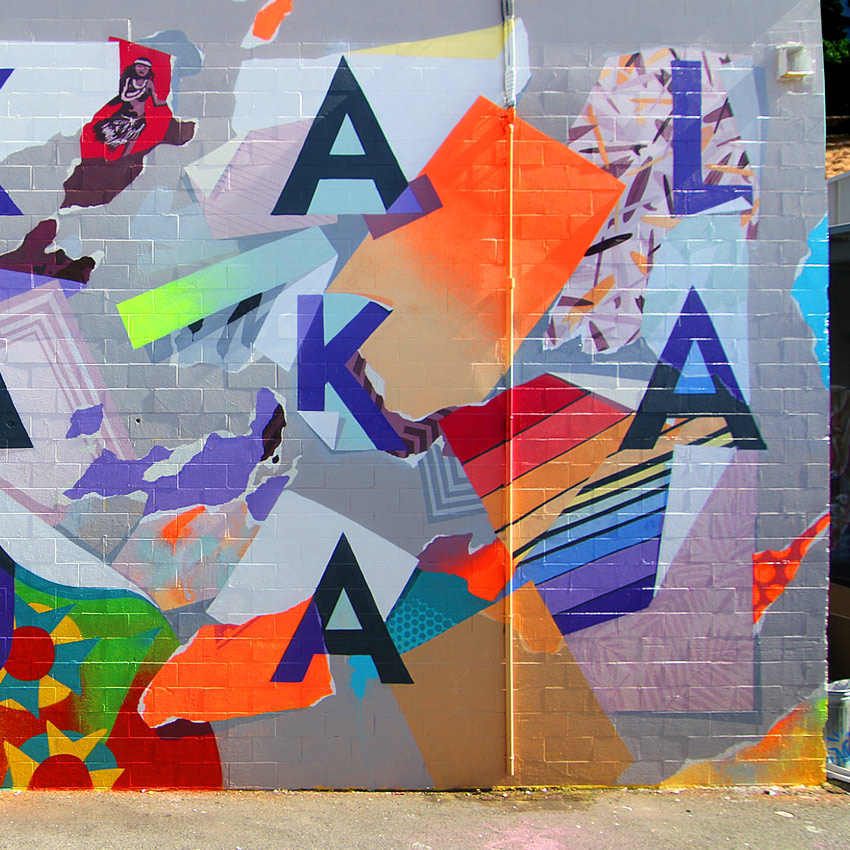 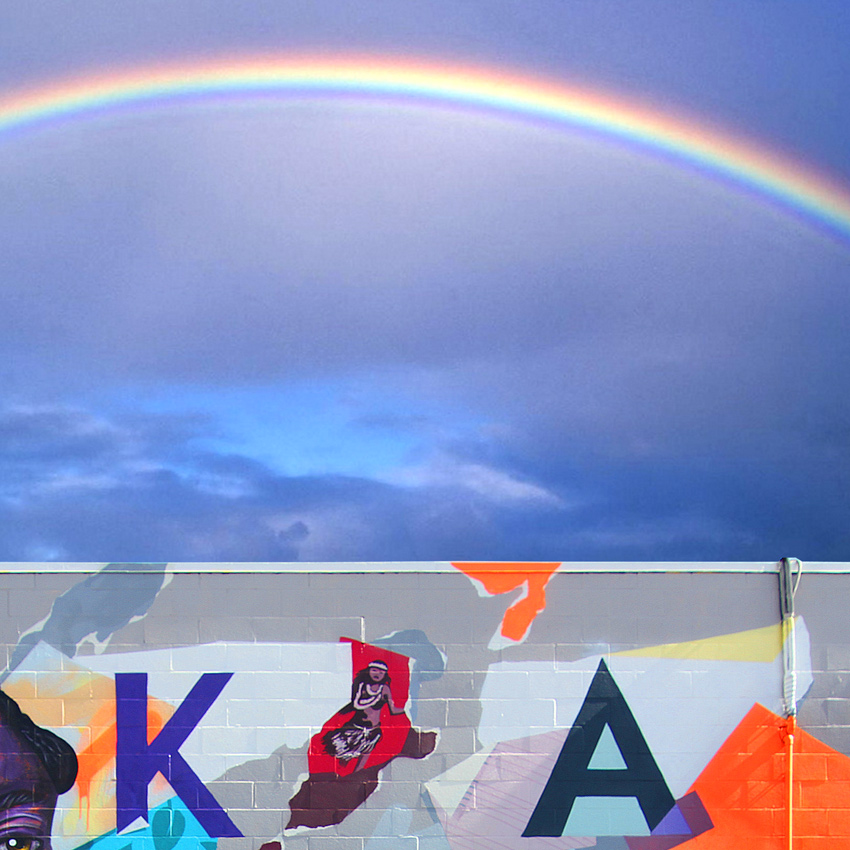 "Pow Wow Hawaii is hands down the best fuckn' (for lack of a better term) street art event ever! Last year when it finally came down to start painting, I wanted to localize and paint a portrait of Hawaii's last King, King Kalakaua. Little did I know, Hawaiian royalty, gods and goddesses are off limits unless you follow protocol. Thankfully, Hawaiian graffiti legends Prime and Estria took me under their wing and offered their guidance. Before I knew it, I found myself in King Kalakaua's crypt having a conversation with the King beyond the grave through a spiritual Kahu. The King held me by the neck and gave me his permission for the mural as long as I made him look good and I made sure I told his story besides just his portrait. I don't know if was fear, anxiety or what but my experience with the after life left my legs trembling like Bambi's little sticks out on the icey pond. I was in way over my head. Not only did I have the pressure of making the King look good but now I had to tell his story too.

As fate would have it, I heard that London based graffiti artist, Roids, wasn't super stoked on his current wall. I humbly asked him to jump ship to the King Kalakaua wall and without hesitation he was on the project. Roids is a true pioneer, visionary and I never would have thought in a million years I would be collaborating with him. When we were finished with the mural it was an absolute miracle because smiling from the heavens was the Kings approval in the form of a perfect rainbow directly above." - Madsteez

This RUN is signed, numbered and comes with a Certificate of Authenticity from Madsteez, Roids and 1xRUN.

MORE
ABOUT Madsteez & Roids:
Madsteez - Born blind in his left eye and given three first names, artist Mark Paul Deren, (aka MADSTEEZ) is a human color wheel spinning on overdrive currently based in WEENSV!LLE, California. From his WEEN!MAL doodles to his larger-than-life pop-soaked paintings, portraits and multi-layered massive-scale murals has granted him worldwide appreciation by transforming blank canvases into an acidic voyage of cosmic explosions. HEYD!K!!!!

Find out more at www.madsteez.com

Roids - After a decade-long campaign of street and subway wall adorning graffiti that has garnered recognition from his homeland in the UK to collaborative art exhibits in California, ROID has finally begun a push for the demanding world of fine art. At the ripe young age of 29, the emerging street artist cultivated a reputation for his own distinct style surrounding boundary-pushing innovations and uber-technical murals. Having spent much of the last decade gaining the attention of graffiti lovers and of course the transit police, ROID joined the ranks of American street art crew MSK in 2008, the same year he graduated from London’s Camberwell College of Art. Since then, the contemporary illustrator made his art world debut alongside Revok and Rime at the Known Gallery in 2011, earning himself a nod from Forbes magazine in an article on “The 30 Most Important Artists and Designers under 30.”

Find out more at www.topsafelondon.com