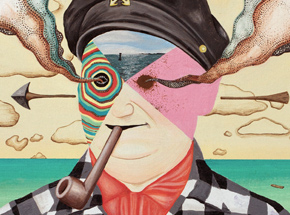 Original Available 1SOLD OUT
Don't miss the next Aaron Glasson release!
Subscribe to our newsletter and be the first to know about new product releases. You will also receive:

This piece of original art is ready to hang.


"My piece for the show was one of few that didn't put the shark as the focal point. I had actually never seen the film, so I watched it for the first time and had really mixed feelings about it. It was cool in some ways, but I also thought it was ridiculous, which I think comes across in the painting. I incorporated some aspects of the film that I found interesting or funny, with some important objects and scenes that maybe only a Jaws fans would get. At the same time I didn't want to paint a Jaws painting that only Jaws fans would like or could take something from.

The Harbor Master in the painting only appears for about five seconds, for no apparent reason, smoking a pipe carrying a cereal box and milk. It made me laugh and I think he is a pretty good representation of salty sea dog, and the humor of the film. Rather than the milk and cereal mine carries the dead shark, and Brody's house. (Spoiler alert! Brody is a main character that wants the shark dead, and ultimately kills Jaws.) If you look really close you can see the remains of an ancient shark buried under his house. This was reference to the fact that although we don't often acknowledge it, sharks have been on earth a lot longer than us, playing their critical part in the ecosystem. In the Harbor Master's forehead is the first scene of the film when Jaws gets his first victim. In the background is the final scene when the boat sinks. There are a lot of other things going on in between it could be fun to watch the film, then look at the painting." - Aaron Glasson

This piece of original art is signed by Aaron Glasson and includes an Original Artwork Letter of Provenance from 1xRUN.

CONTINUE READING
Aaron Glasson documents and interprets his experience of living and traveling this wonderful planet through his artwork. Since working as a car dismantler, tree adventurer, art gallerist, and fish and chip cooker in his homeland of New Zealand, he moved on to become an ocean activist in Antarctica, snowboard instructor in Japan, university professor in Sri Lanka, and video journalist around the world. He now resides in California as a freelance creative director and artist while continuing to travel the planet leaving behind murals, paintings, drawings, installations and films.

ARCHIVED ITEM
This product is archived in our warehouse. It is not currently on sale, but could come back at any time.
ORIGINAL ART
11 x 14 Inches
Pen & Ink on Archival Paper
SEE DETAILS