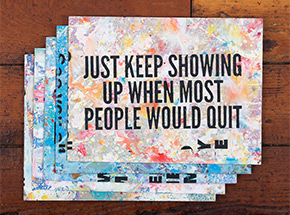 IN THIS EXHIBITION
Just Keep Showing Up - January 2020
This RUN is currently open.
SHARE AND EARN $

$25.00
Quantity
ADD TO CART
Quantity Available 52 Available
About The Artist
Bobby Hill (b. 1973), is the New York based visual artist whose career started as an illustrator. He began painting on canvas in 2008 after returning to the US from his first trip overseas,. His recent canvases combine ripped NYC billboard posters with elements of abstract expressionism, pop imagery and graffiti... to create what he calls “The Bhillboards Collection.”

SOLD OUT ITEM
This product is sold out with very little chance of returning in an archive sale.
EDITION OF 5
18 x 24 Inches
Hand-Embellished Mixed Media Screen Print on 200lbs Heavyweight Paper