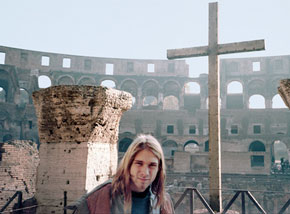 Framed
The framing option for this RUN includes a 1 inch white wood frame with UV-glass, foam core backing and ready to hang hardware.
ADD TO CART
Edition Size: 35
About The Work
About The Artist
"These images were taken at the end of Nirvana’s tour of Europe in late 1989, when they were primarily playing small clubs. My Sub Pop business partner Jon Poneman and I decided to join up with Nirvana (and the TAD band) in Rome as we heard that Kurt was suffering from exhaustion. We had set up a showcase in London at the end of the tour (that also included Mudhoney) and we were concerned that the band might not be able to make it. This image in particular shows Kurt Cobain  expressing relief and gratitude as we first enter the club. He was the first person we saw, and he was happy to see some supportive friends."  - Bruce Pavitt
Read our full interview with Bruce Pavitt at News.1xRUN.com...
CONTINUE READING
Bruce Pavitt was born 1959 in Chicago IL. At the age of nine, he sold Christmas cards door-to-door in the summer heat, earning enough money to buy his first record player, and soon after, his first record (“Revolution” by the Beatles). A lifelong passion for music brought him to the Evergreen State College in Olympia, WA, in 1979, where he spent time as a DJ at KAOS-FM. Soon after, he started his own zine named SUB POP, which reviewed hard-to-find independent rock recordings. In 1988, along with business partner Jon Poneman, Bruce opened the doors to the SUB POP record label in downtown Seattle. By the early 90′s, SUB POP had released recordings by Nirvana, Soundgarden and Mudhoney, and helped initiate a global interest in Seattle area music.

Both an entrepreneur and music historian, Bruce has authored two books, Experiencing Nirvana and SUB POP USA, a collection of his early Sub Pop zines and syndicated columns. Recognized as a cultural visionary and Seattle business icon, Bruce has appeared in a number of documentaries, including Sonic Highways and Hype. His footprints have been bronzed and embedded into the Walk of Fame sidewalk at 6th and Pine in Seattle, alongside Jimi Hendrix and Bill Gates. Bruce Pavitt currently lives on Orcas Island, Washington. He is the father of two, and works as Creative Director at 8Stem interactive media.
CONTINUE READING
More From This Artist
Edition Size: 35
17 x 24 Inches
Archival Pigment Print on 240gsm LexJet Tribute Satin Photo Paper