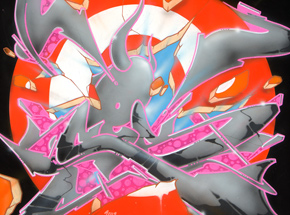 Original Available 1SOLD OUT
Don't miss the next Ces release!
Subscribe to our newsletter and be the first to know about new product releases. You will also receive:

This RUN comes framed in a 1-Inch Black Wood Frame with UV-Glass, Foam-core Backing and Ready To Hang Hardware.


"This piece was created for the Detroit Beautification Project in 2012. The original is painted on a New York City MTA vinyl train letterline from the 1980s. A friend of mine works for the Metropolitan Transit Authority (MTA) and was able to remove the train line letters before they sent the old trains out to be dumped into the ocean to create coral reef. The original is a true one of a kind and so are the prints, each piece will be hand-embellished by me, making each completely unique. " - CES

This RUN comes signed by CES and includes an Original Artwork Letter of Provenance from 1xRUN.

CONTINUE READING
Born Robert Michael Provenzano in 1970 in the Bronx (NY) to a middle class family, Ces began writing graffiti in the early 80s. He’s part of the second wave of writers, those that innovated in letters.