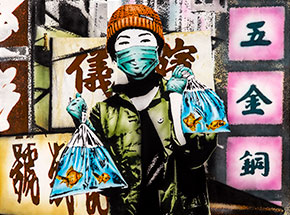 IN THIS EXHIBITION
GFL-5
This RUN is currently open.
SHARE AND EARN $

$850.00
Quantity
ADD TO CART
Edition Size: 25
About The Work
About The Artist
"The Goldfish Girl was created almost a decade ago. I often revisit it, and she has been longest continuing character I've created. I often write back stories for these characters to help me create the pieces, but they are generally never shared with the viewer.
The Goldfish Girl was born in mainland China, and raised mostly by a single father. Her mother passed away when she was 18 months old from cancer. She was often very ill as a child, and was eventually diagnosed with a compromised immune system disorder, although a precise diagnosis was never given. This is the reason for always wearing the mask and gloves.
Her father bred Goldfish for a living and taught her that trade as a kid. They worked side by side and rarely had visitors because of her condition.
Often being extremely ill and also losing her mother made her childhood difficult. As most children do, she tried to find a reason for her misfortune, a reason for why all this had happened to her and her father. Eventually, she believed that her illness and her mother's cancer were a punishment by nature. A curse for toying with nature by breeding goldfish. Eventually, her father passed away as well. Needing to make a living and also to taunt fate she illegally immigrated to Hong Kong. There is a famous goldfish market in Mong Kok on Tung Choi street, but it's commonly called goldfish street. With a compromised immune system the most dangerous thing to her was other people. As a challenge to fate she moved to one of the most densely populated cities in the world. She got a stall on Tung Choi street. This is her challenge, to taunt fate and win, becoming the master of her own fate.
These images are vignettes of her life in Hong Kong. I've never given the character a name. Sometimes she is pictured with a boombox because music becomes a central companion to her mostly solitary life. In the piece Cacophony I wanted her to literally be surrounded by the city. In some way I think I tried to create a character that embodied a lot of traits I aspire to. To remind myself.” - Eddie Colla
CONTINUE READING
Eddie attended the School of Visual Arts in New York and graduated from the California College of Arts with a BFA in photography/interdisciplinary fine arts in 1991. He began his artistic career as a photographer, working first for the New York Times and later countless magazines, record labels and ad agencies. 15 years later he has morphed into one who counters the all-pervasive nature of commercialism in public spaces.

Eddie took on the role of curator at lOAKal gallery in Oakland CA in December of 2012. In 2013 Eddie worked closely on collaborations with D Young V creating several large scale public mural projects and a 2 man installation "Memento Mori" in San Rafael CA. His curating extended to Ian Ross Gallery in San Francisco where he curated "Made in China" a group exhibition where contemporary artists had their work hung side by side with counterfeits produced in an oil painting factory in China. Through 2014-15 Eddie began traveling to Europe and Asia creating street pieces for Paris and Thailand. He finished off the year with 2 collaborative murals with D Young V in Playa Del Carmen, Mexico for Dreamers Art Festival. His work has also been featured in the New York Times, Los Angeles Times, the Huffington Post and the Chicago Tribune.
CONTINUE READING
More From This Artist
EDITION OF 50
14 x 20 Inches
1-Color Chemical Etching on .030 Stainless Steel