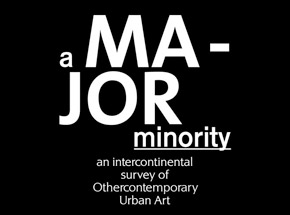 IN THIS EXHIBITION
A Major Minority
This RUN is currently open.
SHARE AND EARN $

The framing option for this RUN includes a .75 Inch Black Wood Frame with UV-Glass, foam core backing and ready to hang hardware.

Curated by San Francisco-based artist Poesia, “A Major Minority” is a survey of Othercontemporary Urban Artists from over 18 countries consisting of over a 100 artists. Expect to see an international sampling of art works that reveal the overall character of Urban Art and its relationship to the public as well as the contemporary art world.

This selection of more than 20 prints from A Major Minority includes work from 1xRUN veterans as Defer, Estria, Askew and Poesia, as well as first timers Bom.k, Drew Young, Moneyless, Morik, Pener, Sepe, Vesod, Xuan Alyfe, Vincent Abadie Hafez-Zepha, SatOne, Bezt, Basik, See One and COL. Each print is limited to just 50 and is A4 size for easy framing.

This RUN is numbered and chopmarked by Major Minority & 1xRUN.

CONTINUE READING
Estria is an internationally recognized muralist and the co-founder and Creative Director of The Estria Foundation (TEF) a nonprofit organization using art in public to transform communities and bring attention to important local issues. TEF creates innovative public art projects and education programs using art in public as a catalyst for community engagement.

ARCHIVED ITEM
This product is archived in our warehouse. It is not currently on sale, but could come back at any time.
More From This Collection
EDITION OF 50
8.3 x 11.7 inches
Archival Pigment Print on 310gsm Fine Art Paper