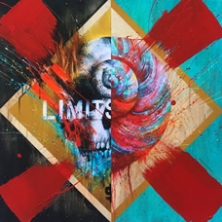 ARTIST
Meggs
This RUN is currently open.
SHARE AND EARN $

CONTINUE READING
David “Meggs” Hooke is one of Australia’s most progressive and committed street and fine artists. Meggs is recognized for his unique, expressive, and energetic style with references to pop-culture, the natural world, and socio-cultural issues. His technical use of color and movement combines clean, bold, illustrative elements with intuitive, textural, and free flowing design. By constantly searching for the harmony between form, abstraction, order, and chaos, Meggs pours his all-or-nothing personality into every inch of his work. His life manifesto is that the ‘journey is the reward’ and his work reflects his eternal search for balance. Meggs’ emphasis on constant growth and passion for travel is demonstrated by his continual exploration of artistic techniques and mediums.

Meggs
From The Ground Up Round 2 - #08
ARCHIVED

ARCHIVED ITEM
This product is archived in our warehouse. It is not currently on sale, but could come back at any time.
ORIGINAL ART
24 x 24 Inches
Acrylic & Aerosol on Birchwood Panel

ARCHIVED ITEM
This product is archived in our warehouse. It is not currently on sale, but could come back at any time.
ORIGINAL ART
12 x 12 Inches
Acrylic and Aerosol on Birchwood Panel

ARCHIVED ITEM
This product is archived in our warehouse. It is not currently on sale, but could come back at any time.
ORIGINAL ART
12 x 12 Inches
Acrylic and Aerosol on Birchwood Panel

ARCHIVED ITEM
This product is archived in our warehouse. It is not currently on sale, but could come back at any time.
ORIGINAL ART
23 x 29 Inches
Acrylic & Aerosol on Repurposed Street Sign

ARCHIVED ITEM
This product is archived in our warehouse. It is not currently on sale, but could come back at any time.
ORIGINAL ART
13 x 15.5 Inches
Acrylic & Fumage on Re-Purposed 1967 LIFE Magazine