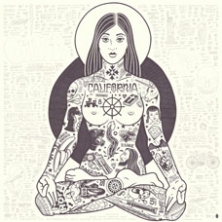 SOLD OUT
Don't miss the next Mike Giant release!
Subscribe to our newsletter and be the first to know about new product releases. You will also receive:

• Early Access
• Exclusive Content
• Artist Features & Interviews
SIGN UP
About The Work
About The Artist
International icon of black ink, artist Michael (GIANT) LeSage incorporates a broad swathe of influences and skills in the creation of a singular, unmistakable aesthetic. Mike’s central practice, drawing, is informed by his training in architectural drafting, his illustrious career as a tattooist and worldwide exploits writing on walls.

Within his latest and most complete monograph, the reader will enjoy photos of perfectly executed tattoos, page after page of Mike’s inscrutable tattoo flash, hand lettering nonpareil, and of course tons of drawings, graffiti pieces and action shots.

GIANT’s worldwide travels — inking people, places and finer drawing paper around the world from Amsterdam to London, Thailand, Toronto, New York and back home to San Francisco are also given due prominence. Buddhism, track bikes, designing for apparel brand Rebel8, and painting fill Lesage’s hours, but at the end of the day, it all comes full circle, back to his unwaveringly mindful solid black lines.
CONTINUE READING
Born in 1971 in upstate New York, artist Mike Giant began drawing as soon as he could hold a crayon. His family moved to Albuquerque, New Mexico in 1979 where he was immersed in BMX bikes, skateboarding, heavy metal, punk rock, hip-hop and gang violence. He graduated in the top 10% of his high school class and attended the University of New Mexico (UNM) on scholarship as an architecture major. He began writing graffiti under the name “Giant” just before starting college and got his first tattoo soon after.

In 1993 he was offered a full-time job drawing graphics for Think Skateboards in San Francisco and decided to leave UNM without a degree. After four years at Think, he lived in London briefly, then returned to San Francisco to work in animation. In 1998, Giant was offered an apprenticeship in tattooing by Nalla Smith. He began tattooing full-time a year or so later, and worked in legendary shops like East Side Ink, Newskool and Everlasting. Giant made tattoos full-time for a decade before switching his attention to REBEL8, a clothing brand he founded with his old friend Joshy D in 2003. Then, after 20 years in California, Mike moved to Boulder, Colorado where he currently lives and works.
CONTINUE READING
More From This Artist
EDITION OF 100
18 x 24 Inches
Black Foil On 100lbs Neenah Classic Crest Eggshell Finish Cover in Solar White
SEE DETAILS