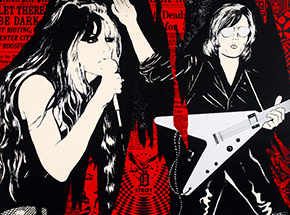 IN THIS EXHIBITION
Let There Be Dark
SHARE AND EARN $

Let There Be Dark - Red Edition

Edition Size 150SOLD OUT
Don't miss the next Niagara x Shepard Fairey release!
Subscribe to our newsletter and be the first to know about new product releases. You will also receive:

CONTINUE READING
While attending the University of Michigan in 1974, Niagara and Mike Kelley formed Destroy All Monsters. The band, known to fans as DAM, was active until 1985, earning international recognition due largely to the presence of former members of The Stooges and the MC5. Later, she fronted the supergroup Dark Carnival (with Stooges guitarist Ron Asheton and his brother Scott Asheton, Stooges drummer).