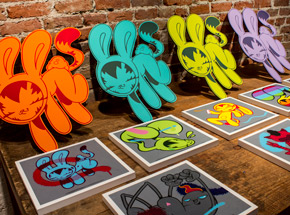 "These pieces are from “Touchy Subjects” show at the Seventh Letter’s flagship store in Los Angeles. I showed with Dabs, Myla and Rime.
CONTINUE READING
In 2001, the established graphic designer, illustrator and graffiti artist “Persue” created a character that combined two of the world’s most universally adored animals: bunnies and kitties. His beloved character BunnyKitty is an undeniably cute yet spunky kitten dressed in a magical bunny suit. In an effort to put a positive spin on graffiti, which faced an onslaught of negative press in the 90’s and early 2000’s, Persue painted this character on walls the world over. What started out as a fun side project to help make aerosol art more palatable to the general public, snowballed into something else entirely.