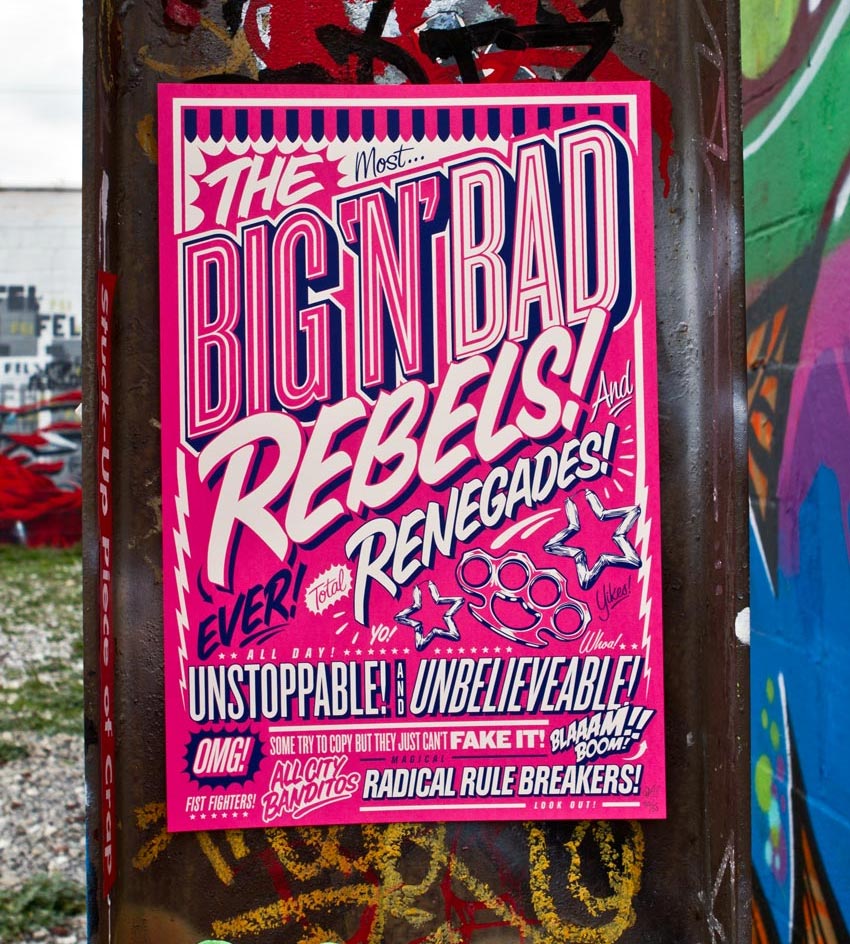 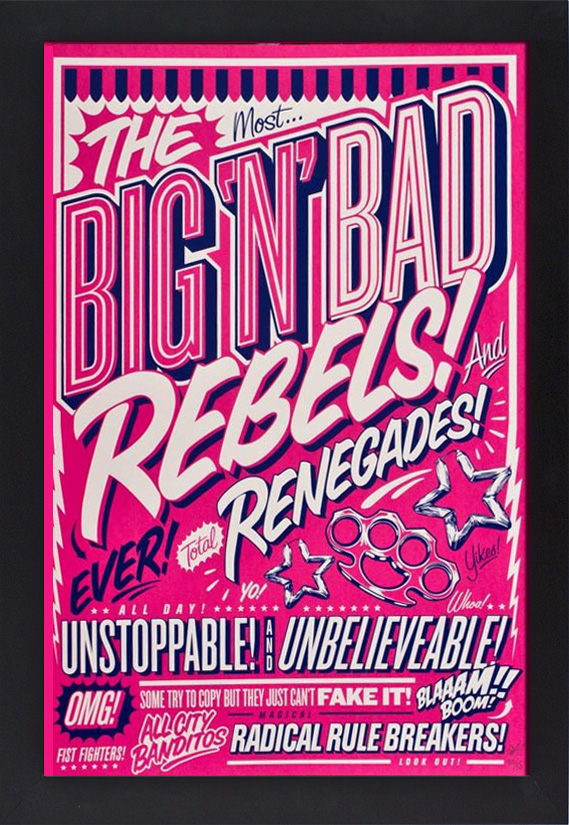 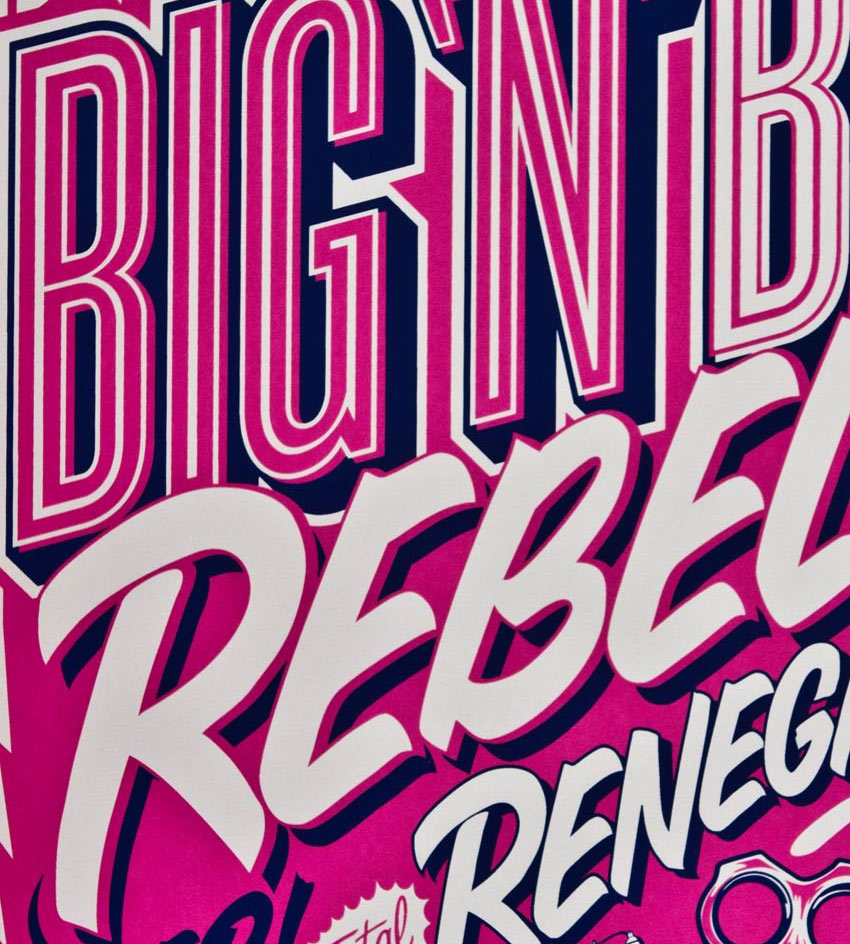 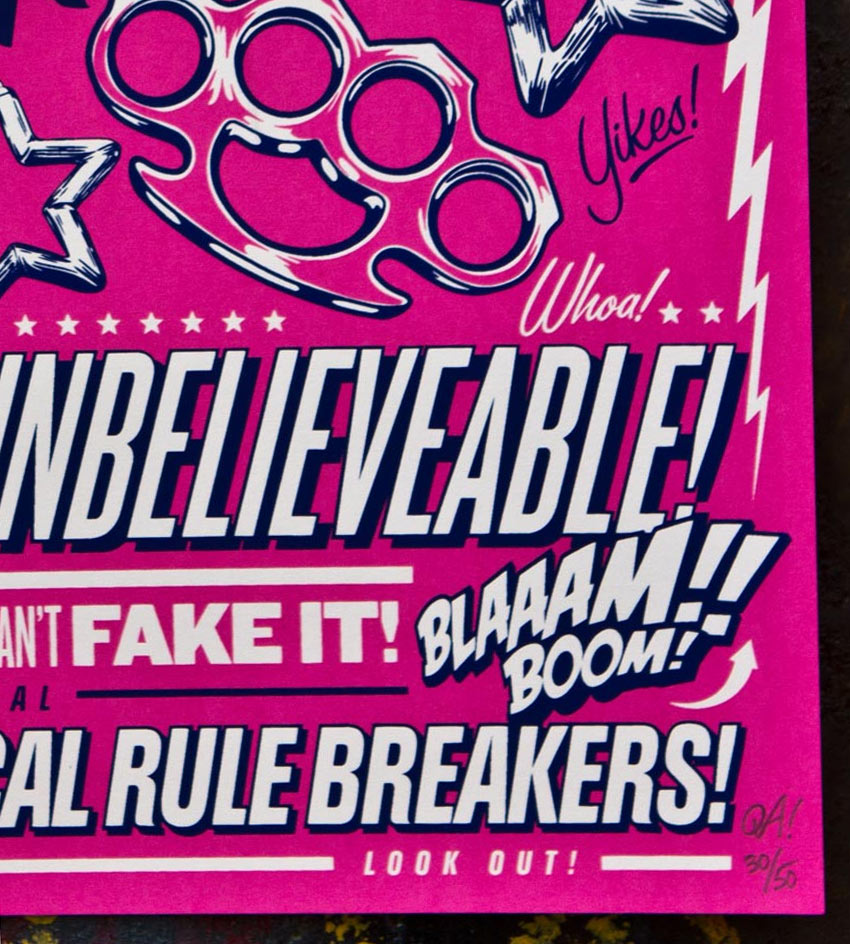 ABOUT THIS ART:
"Big And Bad" is inspired by the rebellious spirit of street artists. ‘Big and Bad Rebels and Renegades’ suggests the fighting spirit of certain artists, who undertake amazing risks to gain fame and make their unique marks on society. It’s also a celebration of rebels generally, the individuals who strive to accomplish unique, daring feats within non-status quo subcultures and paradigms. The artistic style of Big And Bad is an exploration of typography, signpainter lettering and illustration within a very bold composition." - Queen Andrea

Andrea von Bujdoss (AKA graffiti surname "Queen Andrea") is a New York City based fine artist, illustrator, graffiti artist and graphic designer. A native New Yorker raised in the vibrant Soho neighborhood of Manhattan, Andrea has been inspired by the urban landscape from an early age.

Read on for more on Queen Andrea after the break.

MORE
ABOUT Queen Andrea:
Queen Andrea is one of the most skilled and notable female graffiti artists in the country, possessing an explosively creative style inspired by the excitement of the urban landscape. Her custom lettering portfolio has grown beyond graffiti and is a comprehensive collection of letter studies, design and portraiture.

The excitement, color, diversity and crazy energy of city life, and especially graffiti, is where Andrea finds her creative inspiration. Renegade cutting-edge artforms, sub-cultures and lifestyles that have sprang forth from an ever-changing urban metropolis give her the visual stimulus, the guts, and the urge to create and innovate. Her artistic style is influenced by themes of fame, the advertising age, the golden age of hip hop, funk and rap music, typography, geometry, symbolism, signpainter lettering, superheroes, bling, diamonds and bombastic bright color.

Andrea has been featured in major art shows, toy shows, magazines, books, fashion lines and brand collaborations. She has curated and exhibited in numerous exhibitions nationally and is currently preparing for a New York City 2012 solo show.
MORE
MORE FROM Queen Andrea
Run of 8
ARCHIVED
This run is not on sale. Check the product page for more info.
Favorite 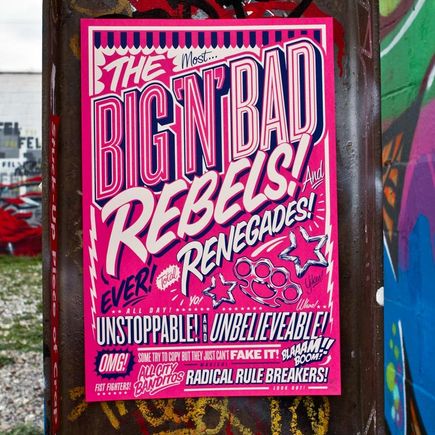 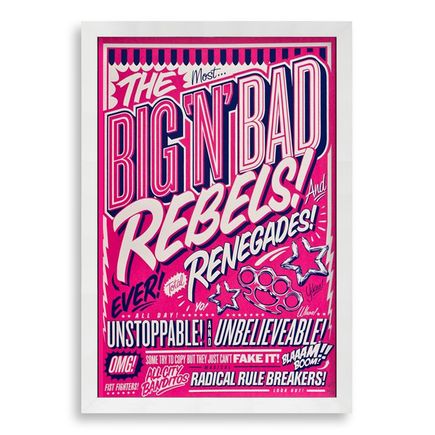 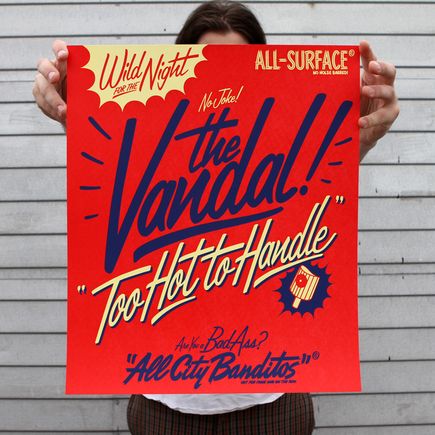