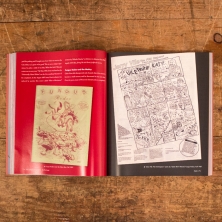 SOLD OUT
Don't miss the next Rob St. Mary release!
Subscribe to our newsletter and be the first to know about new product releases. You will also receive:

• Early Access
• Exclusive Content
• Artist Features & Interviews
SIGN UP
About The Work
About The Artist
With a mischievous globe-headed mascot that appeared in every issue and even on Quentin Tarantino’s T-shirt in Pulp Fiction, Orbit was an instantly recognizable arbiter of 1990s Detroit culture. But its irreverent tone and unique editorial features could be traced to two earlier local publications from creator Jerry Peterson, a.k.a. Jerry Vile—White Noise (1978–1980) and Fun: The Magazine for Swinging Intelectuals [sic] (1986–1990). In The Orbit Magazine Anthology: Re-Entry, author Rob St. Mary details the full run of White Noise, Fun, and Orbit, collecting two decades’ worth of Detroit’s alternative publishing history into an oversized, heavily illustrated volume that situates the publications in the city’s pop culture and media history.

St. Mary shows that while other alternative papers followed a tried-and-true focus on lefty politics and the arts, Vile’s publications found their niche in biting satire and sharp design that fed on popular culture. From the 70s punk scene in White Noise to audacious articles and irreverent "news" in Fun and a blend of reporting, satire, and culture in Orbit, St. Mary shows that Vile’s publications were distinctive in their content and uniquely Detroit in their tone. In sections devoted to each magazine, St. Mary details their recurring features (including dining, movie, and music reviews) and interviews former staffers. Numerous images and page spreads reveal the notable Detroit musicians—like Destroy All Monsters, the Gories, ICP, Jack White, Kid Rock, and Derrick May—and artists—including Niagara, Glenn Barr and Tristan Eaton—that graced their pages.

Forword by Jerry Vile and afterword by Ben Blackwell. Published by Painted Turtle in Detroit, Michigan.

This RUN is signed by author Rob St. Mary.

CONTINUE READING
Born and raised in the northeast suburbs of Detroit, Rob St. Mary cultivated a love of media at an early age. He remembers his first movie experience at age two. A writer from an early age, Rob co-created an underground student newspaper in high school. He also took acting classes around that time that led to his involvement in film. In 1997, at the age of 19, Rob produced a low-budget 16mm vampire/comedy called Tainted – currently available from Troma Entertainment, the company best known for The Toxic Avenger. In 1999, Tainted played at the Cannes Film Festival in the market section. In 2002, Rob undertook his first feature length documentary. The Separation on State Street, released in 2007, which followed a church/state separation case in Michigan's thumb. Rob's film work has screened in festivals internationally and garnered awards.

Since 2001, Rob has worked in radio news. He began his career as a newsroom producer at WJR in Detroit. He has also worked at WLEW in Bad Axe, WSGW in Saginaw, WOOD in Grand Rapids and WDET in Detroit. Rob has been honored over two-dozen times for his feature and investigative work by statewide and national journalism organizations.

Currently, Rob is digital content manager for Aspen Public Radio in Aspen, Colorado. He is also working on a book for Wayne State University Press entitled Re-Entry: The Orbit Magazine Anthology. The book will feature reprints and tell the history of White Noise, Fun and Orbit magazines – Detroit based publications from the late 1970s to 1999. Rob is also co-host of a weekly film podcast, "The Projection Booth", available on-line and through iTunes.