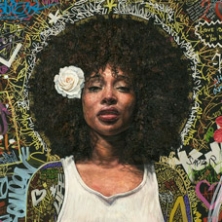 Framed
The framing option for this RUN includes a 1 inch white wood frame with UV-glass, foam core backing and ready to hang hardware.
ADD TO CART
Edition Size 5023 Available
About The Work
About The Artist
Part of Tim Okamura's "GIRLILLA WARFAIR" series, "Storm Warrior" depicts a squire helping a knight don her armor in preparation for battle. Guided by the Code of the Samurai, this renowned champion is responding to a call to arms - she is prepared to take up the fight against social injustice and to defend the defenseless from the tyranny of evil plaguing our society. Black clouds roll in as the sky darkens, signaling impending conflict - she will harness the transformative power of the storm, and wield the ability to manifest lasting change and elevated consciousness. She is an Onna-bugeisha, and a key member of the leadership of a mysterious underground alliance - a noble sisterhood known as The Warriors of Light.
CONTINUE READING
Tim Okamura investigates identity, the urban environment, metaphor, and cultural iconography through a unique method of painting – one that combines an essentially ‘realist’ approach to the figure with collage, spray paint and mixed media. The juxtaposition of the rawness and urgency of street art and academic ideals has created a visual language that acknowledges a traditional form of story-telling through portraiture, while infusing the work with resonant contemporary motifs. \n

\nBorn in Edmonton, Canada, painter Tim Okamura earned a B.F.A. with Distinction at the Alberta College of Art and Design in Calgary, Canada before moving to New York City to attend the School of Visual Arts in 1991. After graduating with an M.F.A. in Illustration as Visual Journalism, Okamura moved to Brooklyn, New York, where he continues to live and work. \n

\nOkamura – a recipient of the 2004 Fellowship in Painting from the New York Foundation for the Arts – has exhibited extensively in galleries throughout the world, including the U.S., Canada, Italy, Japan, Ecuador and Turkey, and has been selected nine times to appear in the prestigious BP Portrait Award Exhibition at the National Portrait Gallery in London, England. \n

\nIn 2006, Okamura was short-listed by the Royal Surveyor of the Queen’s Picture Collection for a commissioned portrait of the Queen of England. \n

\nIn 2013, the University of North Carolina hosted a retrospective exhibition of Okamura’s work that focused on nearly a decade of production. \n\nIn 2015, Okamura received a letter of commendation from the Vice President of the United States, Joe Biden. \n

\nHe was honored in 2016 to have a piece hanging in the Smithsonian National Portrait Gallery in Washington, D.C. \n